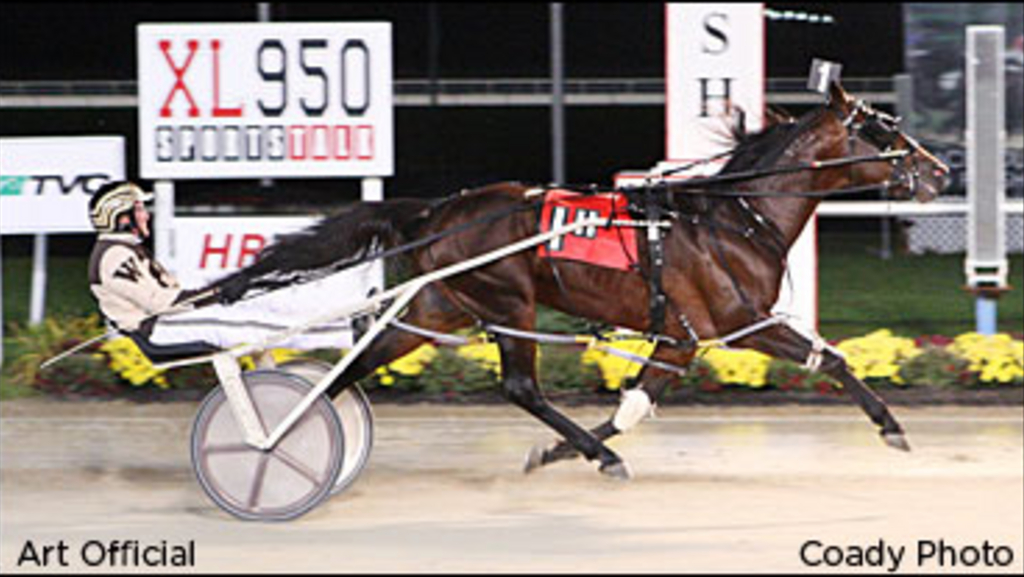 Indiana Downs closed out the month of October with a bang Saturday evening with several close finishes in The Circle City Stakes for three-year-old trotters and pacers. Southern Rocketop and Annieswesterncard were the only post time favorites to prevail in their respective divisions, as the night was ruled by upset winners

. Sawgrass Farms’ Art Official capped the night’s program with a victory in the $86,000 Indiana Pacing Derby. By winning the feature, the Art Major four year old eclipsed $2 million in earnings.

Rose Run Keepsake set the tone for the evening in the night’s third race, using a spirited stretch drive to overtake favorite Dancing Filly and win the $58,400 Circle City for sophomore trotting fillies in 1:56. Driven by Chip Noble, the Armbro Laser-Suchanicegirl filly kicked home with a :28.2 last quarter to hit the wire a quarter length in front. Miss Vicki, guided by Brandon Simpson, raced third.

“She’s been a real easy filly to train,” trainer Tom Blankenship said of the winner. “You’ve got to give all the credit to her.”

Owned by Ronald Bates of Amanda, Ohio, Rose Run Keepsake has won 13 of 20 seasonal starts. The victory pushed her career earnings to $194,563. The time equaled her lifetime best, taken earlier this year at Scioto Downs.

Favored Winning Mister jumped it off at the start of the $33,100 first division of the Circle City for three-year-old trotting colts and Motor Inn capitalized, surging past second-choice Photoforwin to score a 1:57 upset. Dave Magee guided the Like A Prayer-Ritzy Ritz gelding to his sixth seasonal victory. Local combatant Bar One trotted third for driver Peter Wrenn.

Motor Inn left for the lead from post four for trainer Bobby Brower and clicked off a :29.1 opening panel before being shuffled by Photoforwin and Rick Beinhauer racing to the half (:58.3). Second along the rail in deep stretch, Magee was able to find racing room in the lane and collect the win.

“Bobby told me to go ahead and go out of there at the start. He felt really good,” the driver said of Motor Inn. “I was just hoping to get out in time in the stretch.”

Bred by Kentuckiana Farms General Partnership, Motor Inn is owned by DM Stables LLC of Naples, Fla. The gelding improved his earnings to $134,730 in victory.

Magee swept the Circle City divisions for trotting colts with an easy 1:57 win behind heavy favorite Southern Rocketop. Lining up third in a field of seven, the Robert Taylor trainee moved to the top and never looked back, shuffled briefly on the backstretch before winning handily by a length. Reinsman Hanover crossed the wire second, followed by Civil Cause.

“He’s a very nice horse and he’s been competing with the best in the country,” commented Magee. “He did it all on his own tonight.”

Southern Rocketop, third to Muscle Hill in the Canadian Trotting Classic, collected his 10th win of the season for owners Powers Farms LLC of Winchester, Tenn. The Psychic Spirit-Summer In The City gelding raised his seasonal bankroll to $433,036 and career earnings now total $585,141.

Ultimate Velocity and trainer Trent Stohler continued the upset theme in the $59,600 Circle City division for sophomore pacing fillies, nosing out Best Of Ball and Noble at the wire in 1:53. Notjustaprettyface and Wrenn rounded out the trifecta, while favorite My Heart Was True finished fourth.

Starting from post four, Stohler and Ultimate Velocity made the most of a pocket trip behind pacesetter Best Of Ball. The leader cut fractions of :28.2, :57.2 and 1:25.4 for Noble as Warrawee Kay advanced on the outside to second rounding the final turn. In the stretch, Stohler waited for racing room, and when the door opened, his filly took full advantage. Ultimate Velocity closed the gap late in the stretch and narrowly edged out Best Of Ball in the final strides.

“The wire was getting close,” Stohler said of finding racing room late. “Down there late she dug right in.”

A Western Ideal filly out of Breeders Crown champion Extreme Velocity, Ultimate Velocity earned her fifth win in seven attempts. She is owned by Trent Stohler Stable Inc. and Kenneth Stohler. She has earned $55,180 this season for her connections.

Annieswesterncard, sent off as the 1-2 favorite, sprinted home in :26.3 to capture the $34,300 second division of the Circle City for three-year-old pacing colts in 1:53. Wrenn piloted the Sawgrass Farms entry for trainer Joe Seekman. Smellthecolornine and Sam Widger raced a length and a half back in second while Nob Hill High finished third.

Annieswesterncard left the gate fifth for Wrenn as Nob Hill High and Magee reached the quarter in :29. Smellthecolornine would soon take command, flashing past the half in :57.1. Underway from mid-pack, Wrenn was out and moving with the Western Hanover gelding. Racing first up, the favorite advanced to second as the field reached the three-quarter-mile marker (1:26.1) and finished strong to earn his fifth win of the season.

“He’s a fast horse, I just didn’t want to start him up early,” Wrenn commented. “He swelled up in the stretch and was just full of himself.”

With the win, Annieswesterncard pushed his earnings to $568,806.

Evening Job and Ricky Macomber sprinted home late in the stretch to win the $34,000 first division in 1:52.4. The duo finished a quarter-length in front of the favored Erv Miller-trained entry of What It Means and Grandma Jan’s Max, dead-heat runners-up. Bob Watts finished fourth as Allamerican Improv and Jojo N Goliath finished in a dead-heat for fifth.

Trained by Ron Burke, Evening Job picked up his seventh win of the season. The Dream Work-Eve Of The Ball colt possesses career earnings of $226,441. He is owned by Burke Racing Stable, Weaver Bruscemi, Frank Baldachino and JJK Stables.

In the night’s feature, the $86,000 Indiana Pacing Derby, Sawgrass Farms’ Art Official wired the field for Wrenn and cruised to a 1:51.3 score. The victory was the18th for the son of Art Major-Naughty Shady Lady and moved him over the US$2 million mark in career earnings. Art Official benefited from a pedestrian second quarter (:30) before flying home in :25.3, the fastest final quarter ever recorded at Indiana Downs.

“It was just about lights out from there,” Seekman said of the soft second quarter after a :27.3 opening panel. “He’s been long overdue for a good draw and tonight he was very good.”

Starting from the rail, Wrenn quickly took command and dictated the pace through the wire. At the finish, Art Official was a length and a half in front of Robin I Scoot and Trace Tetrick. Freddyscooter followed in third.

“Turning for home I wasn’t concerned. He was taking off on his own,” Wrenn explained. “He’s so powerful.”