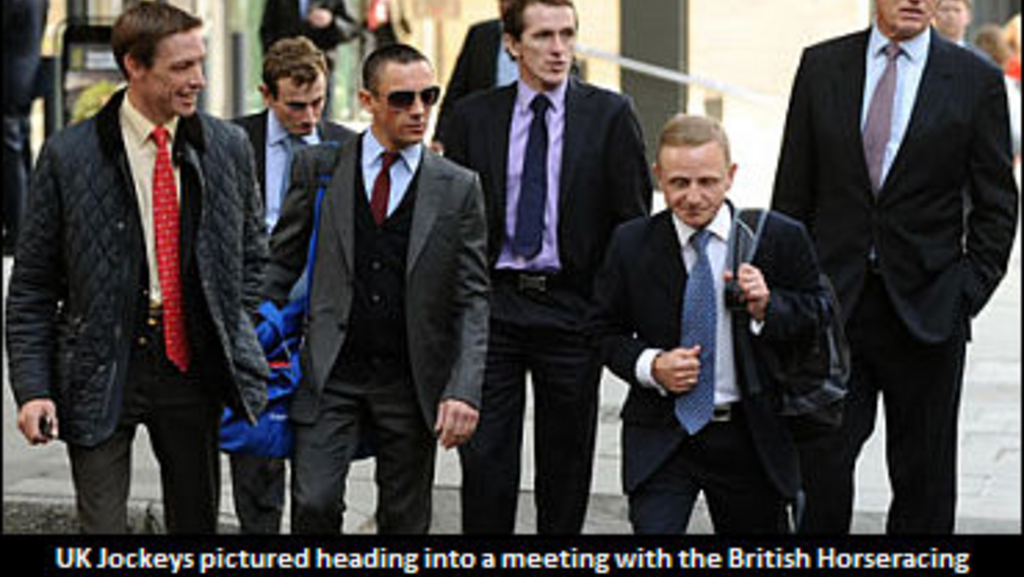 Much has happened since jockeys that perform under the jurisdiction of the British Horseracing Authority decided last week that they would not ride today (Monday, October 17) due to a new whipping rule which limits the amount of times they can strike their mount during a race

On Saturday, October 15, the BHA and the Professional Jockeys Association agreed to a sit down meeting to avert a Monday strike.

The meeting took place and both sides parted ways without an agreement. The BHA conveying that it would release some sort of announcement in regard to the situation later in the day. PJA Chief Executive Kevin Darley was the only individual that commented to the media directly after the meeting. He was quoted as saying that his organization got their points across, but did not rule out the possibility of a strike occurring. "We'll have to see what comes out of the meeting, what they (the BHA) decide," he said. "And depending on that, we'll have to see what the jockeys feel. If it's not favourable, then we'll have to reconsider our position."

Later in the day, the BHA released an announcement which stated, in part, that it still endorses of the principles behind the 10-month review which led to the formation of the rule, and that it would have its review group examine the issue again. The review group is to report back to the BHA by the end of this week. As of right now, the current rule will continue to be in application. A portion of the BHA announcement appears below (to read it in its entirety, click here).

'The Board has today reiterated its endorsement of the principles behind the review. The new rules, adopted by the Authority, received widespread support from across the industry.

'Any change to regulations must be carefully considered and subject to due process. This means that appropriate evidence needs to be reviewed and there will need to be engagement with other relevant parties.

'The Board has directed the Review Group to undertake this process and report back by no later than the end of the week.'

The new rule, which was applauded by some jockeys when it was initially announced, limits the total amount of times a jockey can hit his/her horse with the whip to seven. The rule also outlines that the whip can be used a maximum of five times within the final furlong. In turn, many jockeys have been slapped with fines and suspensions since the rule came into effect. Since the distances in thoroughbred races vary from contest to contest, riders had indicated that it is hard to know where the marker for the final furlong is in each race.

One jockey in particular, Richard Hughes, had announced that he would be giving up his license to professionally ride horses after he was slapped with two violations of the rule within a four-day span. In turn, trainer Richard Hannon offered a quote in support of Hughes and his situation. "It is absolutely ridiculous," Hannon said, "and we will be the laughing stock of America when we get to the Breeders' Cup and tell them that we could not bring our jockey because, though he weighs little more than 8 stone (50.8 kilos), he was suspended for striking half a ton of horseflesh six times with a padded foam whip."

This past weekend, Belgian rider Christophe Soumillon, who was at the BHA-governed Ascot on Saturday to compete in the QIPCO Champion Stakes, won the event aboard Cirrus Des Aigles, but it was found that he violated the new rule in victory.

Soumillon, who had a lot to say about the BHA repercussions, was forced to forfeit his £52,000 share of the prize money in exchange for a five-day BHA riding suspension. Soumillon, who indicated that he would be contacting a lawyer in regard to the incident, was quoted as saying, "I'm very embarrassed for English racing. You have a lot of problems, but the whip is not one of them." On Sunday (October 16), Soumillon, who had encouraged United Kingdom riders to go on strike over the incident, travelled to Woodbine Racetrack in suburban Toronto and guided filly Sarah Lynx, a 22-1 longshot, to victory over male counterparts in the $1.5 million Pattison Canadian International.

In an ironic article somewhat related to the new BHA whipping rules, it has been reported a leading analyst of UK jump racing has claimed that BHA stewards have been allowing jockeys to not get maximum effort out of their mounts in races. Timeform's Chasers & Hurdlers annual claimed that the stewards appear to be "blind" to such practices. The publication has stated that, "The main responsibility for seeing that punters are not short-changed rests with the stewards, who must be seen to be imposing the rules with firmness and consistency."