On Saturday, January 28, Standardbred Canada announced harness racing’s national champions at the 2016 O’Brien Awards, which honour Canada’s best in harness racing over the past season.

This was the 28th edition of the O’Brien Awards, named in honour of the late Joe O’Brien, an outstanding horseman and member of the Canadian Horse Racing Hall of Fame.

It was a big night for several winners who took home more than one O’Brien trophy.

Betting Line, co-owned and trained by Casie Coleman of Cambridge, Ont., who shares ownership with West Wins Stable, Christine Calhoun and Mac Nichol, took home two O’Briens -- one in the three-year-old pacing colt category and one as Canada’s Horse of the Year. 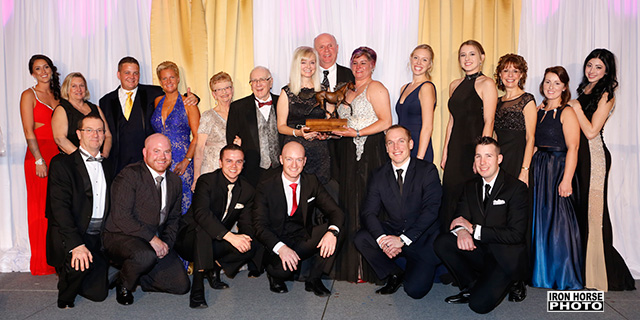 Marvin Katz of Toronto, Ont., and Al Libfeld of Pickering, Ont., were honoured for the second consecutive year with the Armstrong Breeder of the Year Award, and their two-year-old trotting filly, Ariana G won the O’Brien in her division. Katz also shares ownership on Idyllic Beach who was honoured as Canada’s Two-Year-Old Pacing Filly of the Year.

Rick Zeron of Oakville, Ont., took home the O’Brien Award of Horsemanship and his two-year-old trotting colt, Mass Production was also honoured with an O’Brien.

Driver Sylvain Filion, of Milton, Ont., and trainer Richard Moreau of Puslinch, Ont., added to their trophy collections, both winning National honours in their respective categories for the fourth time in their careers. 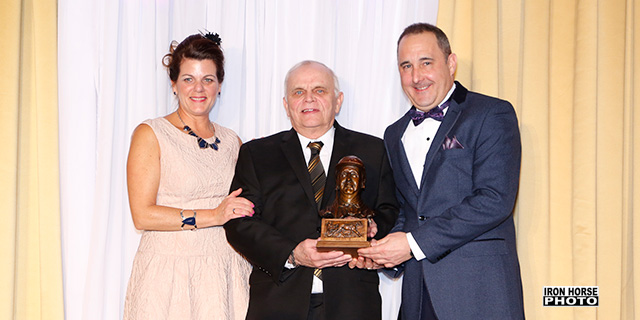 Betting Line was almost perfect in 2016, finishing the season with 14 wins and a second in 15 races to go along with almost $1.7 million in earnings. The Bettors Delight colt’s victories included the $1-million Pepsi North America Cup, the Battle of the Brandywine, the Milstein Memorial, the Little Brown Jug, the Simcoe Stakes, and a sweep of all of his Ontario Sires Stakes races, including his OSS Super Final.

What started as a partnership that focused on buying yearlings and racing horses has evolved into one of harness racing's most respected breeding enterprises for Marvin Katz and Al Libfeld. Horses bred by this partnership won 29 races and purses in excess of $1.3 million in 2016. Their top horses were All The Time, O’Brien winner Ariana G, Princess Aurora and O Narutac Perfecto.

Veteran horseman Rick Zeron continued to successfully compete as a trainer and driver on the Woodbine Entertainment Group (WEG) circuit. Last year he drove 116 winners and horses to almost $2.6 million in purse earnings, while training 49 winners and horses to $1.7 million in earnings, including Mass Production, winner of the O’Brien Award in the two-year-old trotting colt category.

Sylvain Filion, a resident of Milton, Ont., won Canada’s Driver of the Year title in 2012, 2013 and 2015 before collecting his fourth bronze for the 2016 season. In 2016, he drove 310 winners and led all Canadian drivers in the earnings column with more than $7.7 million, while joining the $100 million club for lifetime earnings. Filion was the regular driver for O’Brien champion, two-year-old pacing colt Beyond Delight.

Trainer of the Year Richard Moreau, of Puslinch, Ont., took home his fourth consecutive O’Brien trophy. Moreau, who has been a regular on the WEG circuit for over 12 years, led all Canadian trainers in the wins column with 249 wins to his credit and trained the winners of nearly $4.0 million. 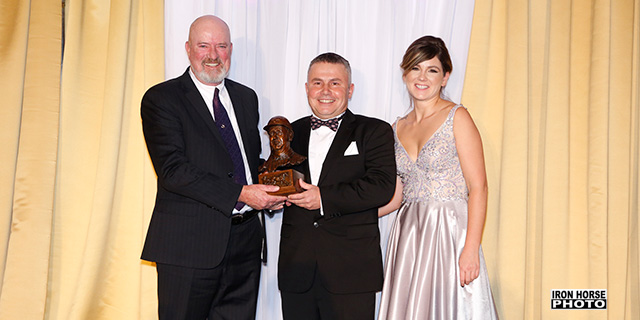 Louis Philippe Roy was recognized as the Future Star winner. In 2016, the Mont-Joli, QC resident put together some phenomenal numbers, winning 233 races and driving horses to earnings of more than $1 million. Roy was the leading dash winning driver at Hippodrome 3R and Rideau Carleton Raceway.

Idyllic Beach was honoured in the two-year-old pacing filly division. She hit the board in all of her 14 races, boasted eight wins and almost $730,000 in purse earnings. Major stakes wins for the Somebeachsomewhere filly included the Shes A Great Lady elimination and final at Mohawk Racetrack, along with the Kentuckiana Stakes at Hoosier Park, and the International Stallion Stake at The Red Mile.

The Bettors Delight colt Beyond Delight, winner in the Two-Year-Old Pacing Colt category, won three of 11 races and more than $423,000 for his connections. His three wins were major ones as he swept the elimination and final of the Metro Pace and won a division of the Champlain Stakes, all at Mohawk Racetrack.

L A Delight picked up her second consecutive O’Brien trophy after putting together another stellar season as a sophomore, winning nine races in 19 starts and more than $787,000. The three-year-old pacing filly was perfect in the Ontario Sires Stakes events, sweeping six of six, including the season-ending Super Final. She posted a life’s best 1:49.1 in winning the Nadia Lobell at The Meadows.

Lady Shadow won her third straight O'Brien Award, and second consecutive in the Older Pacing Mare category. She put together another profitable season with 12 victories and more than $945,000 in earnings. She was strong throughout the season, sweeping the elimination and final of the Roses Are Red, the Milton Stakes, and the elimination and final of the Breeders Crown before capping her year with a win in the TVG FFA at The Meadowlands.

Wiggle It Jiggleit, the sport’s richest harness horse last season with $1.8 million bankrolled was voted Canada’s Older Pacing Horse of the Year. He never finished worse than third in his 24 races which included 15 wins and a mark of 1:47.2 posted in the Graduate Final at The Meadowlands. The multiple stakes winner captured Canada’s oldest stakes event, The Canadian Pacing Derby at Mohawk Racetrack and also secured runner-up finishes in the Confederation Cup and Prix d'Été on Canadian soil.

Caprice Hill won her second consecutive O’Brien, after a profitable campaign in 2016 with eight wins in 15 starts and purses in excess of $630,000 for her connections. The Three-Year-Old Trotting Filly of the Year won three of four Ontario Sires Stakes events, the Casual Breeze, Simcoe Stakes and was runner-up in the Hambletonian Oaks.

Marion Marauder took divisional honours as Canada’s Three-Year-Old Trotting Colt of the Year. He was a winner of 10 of 15 starts, became the ninth Trotting Triple Crown winner in 2016 –- and first since 2006 –- by sweeping the Hambletonian, Yonkers Trot, and Kentucky Futurity. The son of Muscle Hill won the Goodtimes Stakes and a division of the Stanley Dancer Memorial en route to a season that amassed more than $1.5 million in purses, topping the North American earnings charts for all trotters.

The incredible trotting mare Hannelore Hanover won 17 of 20 races and earned $1.1 million in purses, leading all female trotters in earnings and winning the O’Brien for Older Trotting Mares. Her victories included the Breeders Crown Mare Trot and the Hambletonian Maturity, where she defeated male rivals. She also beat the boys in the Centaur Trotting Classic in addition to winning the Armbro Flight Stakes, TVG Series championship for female trotters, Fresh Yankee, Muscle Hill, and Miami Valley Distaff. Her mile time of 1:51 in winning the Armbro Flight equaled the world record for a four-year-old trotting mare.

Flanagan Memory was recognized as Older Trotting Horse of the Year. The now seven-year-old son of Kadabra won six of 14 races including the Allerage, and the Breeders Crown Championship, and banked more than $663,000 last season. This was his second O’Brien Award as he won Three-Year-Old Trotting Colt honours in 2013.

The Media Excellence Awards and Outstanding Groom Award were also presented at the O’Brien Awards gala.

Teesha Symes, 27, of Cambridge, Ont., was recognized with the Outstanding Groom Award for 2016. Symes has worked for O’Brien Award winner Dr. Ian Moore for the last decade, and full-time since 2012. The Springhill, N.S. native cared for State Treasurer, Canada’s Horse of the Year in 2015, throughout his racing career. In addition to State Treasurer, Symes went on the road to care for Rockin In Heaven the past two years and also cared for many of the Moore Stables’ two-year-olds.

Keith McCalmont of Toronto, Ont. won in the Outstanding Written Work category for his contribution to the ‘Remembering Those Lost’ feature, published in the February 2016 issue of TROT Magazine. McCalmont talked to some of the trainers and owners most affected by the tragic barn fire at Classy Lane Training Centre and asked them to share some memories of their beloved horses.

‘The Pepsi North America Cup’ aired across Canada on the TSN2 television network on Saturday, June 18, 2016 from 10:00 – 11:00 p.m. The 60-minute special broadcast of the $1-Million Pepsi North America Cup aired in high definition and featured live race coverage of the main event as well as a feature on Emprize Hanover and her two foals.

Clive Cohen’s photo of October racing at Mohawk Racetrack in Campbellville, Ont. was the winner in the Outstanding Photography category. This marked the third time that Cohen has won in this category.

Cohen’s photo was taken on October 1, 2016, at Mohawk Racetrack and published later that night on the WEG Standardbred Instagram feed. Cohen is the resident track photographer for Standardbred racing at Mohawk and Woodbine Racetracks.

Here is the complete list of winners with respective owners.

Owned by West Wins Stable, Cambridge, ON, Christine Calhoun, Chatham, ON and Mac Nichol, Burlington, ON

Owned by Marvin Katz, Toronto, ON & Al Libfeld, Pickering, ON

Owned by Tom Hill, Hamilton, ON

Owned by West Wins Stable, Cambridge, ON, Christine Calhoun, Chatham, ON and Mac Nichol, Burlington, ON