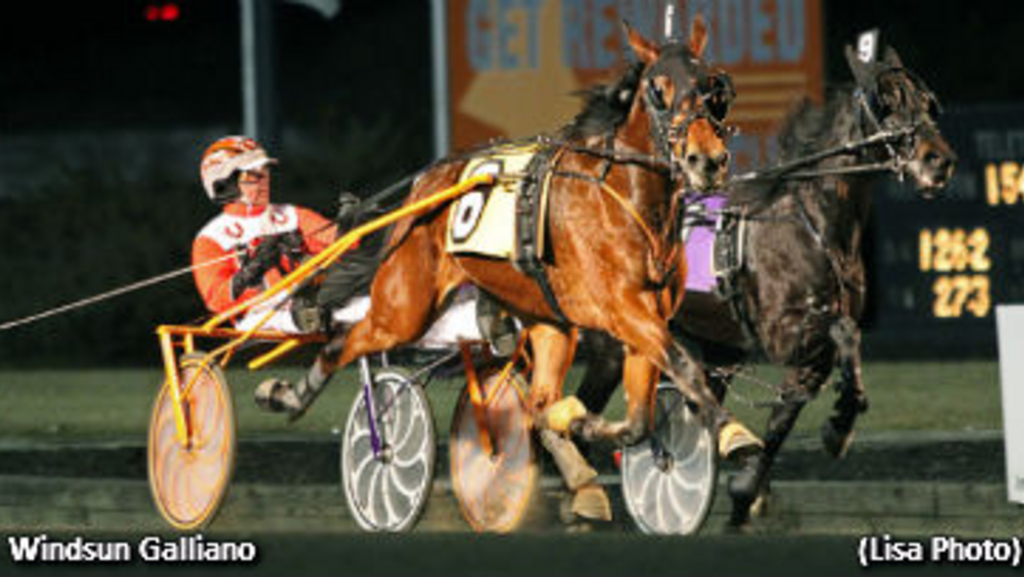 Week one of the Super Bowl Series was all about the favourites getting the job done, but Thursday’s second leg of the series was a much different story as upsetters prevailed in all three divisions.

Sweet Ben came through at odds of 6-1 in the opening division for the tandem of driver John Campbell and trainer Danny Collins. The four-year-old son of Like A Prayer-Sweet Sahbra watched Explosive Fashion and race favourite Joyeux Dream take turns on the lead through fractions of :28 and :57.3 before taking matters into his own hands. Campbell had his charge on top at the three-quarter pole in 1:27.1, and together they managed to fend off a late-rushing Jailhouse Juice by a nose in 1:56. Joyeux Dream tagged along to finish third.

It was the first win of the season from three assignments for the trotter, who produced a 4-3-1 record from 12 starts in 2012. The career winner of $36,119 is owned by Bay Pond Racing Stable of Paoli, PA.

Windsun Galliano used his closing kick to perfection en route to notching a career-best clocking of 1:54.2 in the second division for Team Miller. Driven by Andy Miller for trainer Julie Miller, the gelding watched odds-on favourite Where To Hanover lead the group to the quarter in :27.3 before pulling first-over and prompting that foe through middle splits of :57.3 and 1:26.2. Windsun Galliano used a :28-second final frame to win by half a length over Where To Hanover, with No Less Than Magic taking home the show dough in the $30,000 tilt.

The four-year-old son of Ken Warkentin-SA Mariposa is now 2-for-3 this season after going winless in five starts last year. The career winner of $12,250 is owned by Tracy Brainard, James Harper, Jr. and Elizabeth Harper.

Wisenheimer was a front-stepping winner in the final division, and he did so all the way from Post 10 at odds of 6-1 with driver Dave Miller in tow. The four-year-old son of Revenue S-Connemara, who was a 1:56.2 winner in the opening leg of the series, brushed to the lead in the backstretch and took the field through middle panels of :56.3 and 1:25.3 before being confronted in the lane by race favourite Helios. Wisenheimer turned back that challenge and held on to win over Helios in 1:54.3. Volare De Vie completed the top three finishers.

Trainer Jenny Melander of Nazareth, PA leases Wisenheimer, who won for the fifth time in his career. The $7,500 payday lifted his lifetime earnings to $39,405.