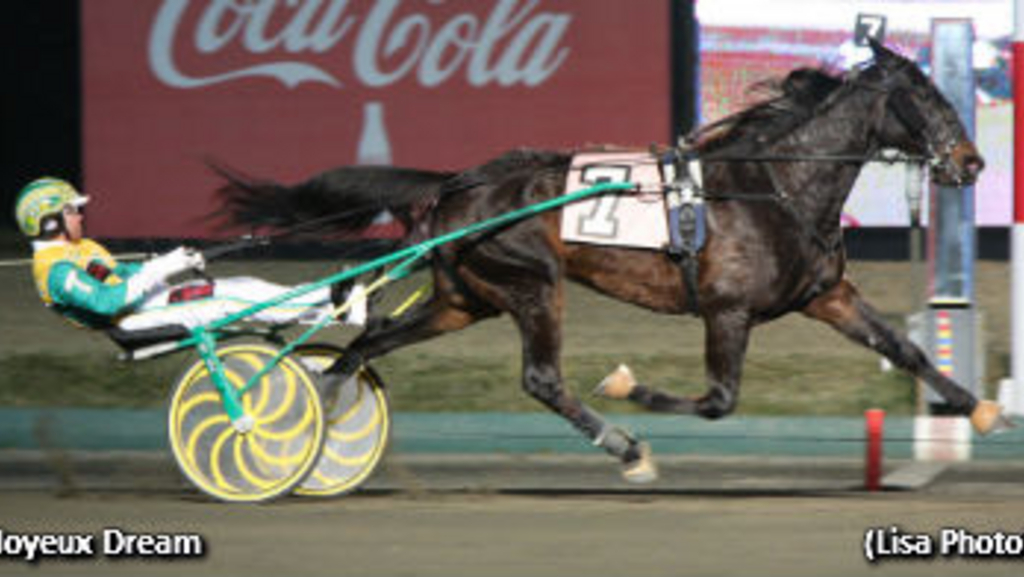 The opening leg of the Super Bowl Series was contested during Thursday’s 10-race card at The Meadowlands, and it turned out to be a parade of favourites.

Where To Hanover, who was sent off as the 1-5 choice in his $12,500 division, kicked things off with a 1:55.4 score for driver David Miller. The four-year-old son of Donato Hanover-Wherley got away fifth while South Jersey Bugsey rushed to the lead and supplied the field with fractions of :27.4, :56.4 and 1:26. Miller came first-over with Where To Hanover in the backstretch and used a :29-second closing quarter to win by 4-1/4 lengths in 1:55.4. LA Hollywood came on to finish second, with Church St Boom R taking home third prize.

Joseph King trains the undefeated gelding for owner Gary Machiz of Cream Ridge, NJ. The trotter, who is now 3-for-3 in his career, has banked $16,750 to date.

Joyeux Dream went to the front and didn’t look back in the second division for the tandem of driver Tim Tetrick and trainer John Cabot. The gelding threw down fractions of :27.4, :56 and 1:25.4 before cruising home in a :30-second clip to win by 3-1/2 lengths over For Goodness Lindy in 1:55.4. Taking home the show dough was Swiss Lightning.

The four-year-old son of Infinitif-Jolie Reve, who was sent off as the 6-5 favourite, is now 1-for-2 this season after going 5-for-11 last year. Howard Kaufman of Bryn Mawr and Joshua Kaufman of Philadelphia, PA share ownership on the career winner of $33,845.

Helios was sent off as the 8-5 choice in the third division, and the gelding didn’t disappoint his backers. Andy Miller treated the Julie Miller trainee to a three-hold trip while Morey front-stepped through fractions of :28.1, :56.2 and 1:26. Miller angled Helios into the centre of the racetrack coming off the final turn, and the trotter used a :29.1 final frame to win by a length over No Less Than Magic. Morey faded to finish third.

Little E LLC of New York owns the four-year-old son of Muscles Yankee-Enjoy The Sun who is 2-for-2 this season after putting together a 4-for-5 record last year. To date, the photogenic performer has banked $32,900.

Wisenheimer wrapped up the opening leg of the series by capturing the final division in a time of 1:56.2, and he did so as the 1-2 favourite. David Miller guided the four-year-old son of Revenue S-Connemara to the narrow tally over Take It To Nine, who sliced out splits of :28.3, :58 and 1:26.4 before getting nipped at the finish line. Majestic Stone came on late to finish third.

Racing under lease to trainer Jenny Melander, the gelding was victorious in his 2013 debut after putting together a 3-1-2 record from last year’s 20-start campaign. The lion’s share of the purse lifted the trotter’s overall cash stash to $31,905.