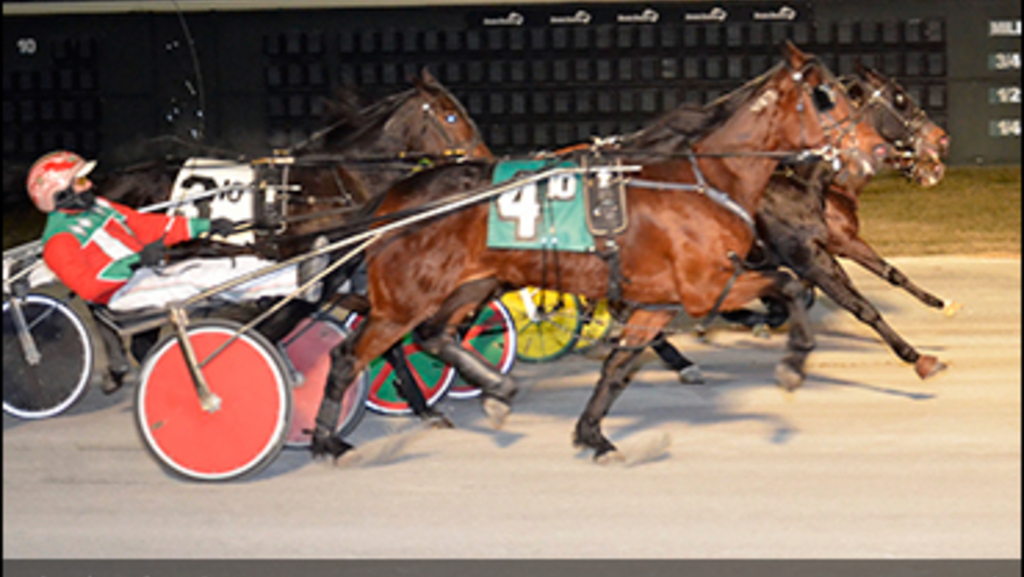 The photo-finish camera was needed to decide a four-horse photograph, deeming race favourite Splashed and 22-1 shot Great Kate having finished in a 1:55.1 dead heat in the $12,000 feature trot on a chilly Monday (Jan. 1) with temperatures in the low teens Fahrenheit at Dover Downs.

In addition, Sheer Assault (Corey Callahan) and Pure Kemp (Art Stafford, Jr.) were noses away, finishing third and fourth respectively before the judges ruled Sheer Assault interfered with Pure Kemp in the lane and their finishes were reversed.

Tony Morgan is now only three wins away from registering 16,000 winning drives after steering Ron Davis’ Mister Virgin to an impressive 1:51.3 triumph in a $17,500 claiming pace. Carracci Hanover (Eddie Davis, Jr.) was next in front of Letsmakeawish (Ross Wolfenden), who finished third.

Ross Wolfenden had a triple while drivers Jonathan Roberts and Vic Kirby, trainer Wayne Givens, and owner Legacy Racing all had doubles.

Since early meet, Theresademoninme and Jonathan Roberts have compiled an impressive record for owners Mike Casalino and trainer Dylan Davis. Theresademoninme has three wins and three seconds in his last eight races. He has been fourth in his last two outings and drew the rail. Jim Moore’s Royal Becca J with Jack Parker, Jr. steps up in company after losing by a nose last time but drew post 8 in this one; Bob Shahan and Jimmy and Ashley Parsons’ I Like My Boss finished last month strongly with Allan Davis in the bike.

B Yoyo returns from a pair of tough out-of-town races. Tony Morgan drives for trainer Jenn Bongiorno and Bill Lambos and Dionisios Liberatos. Hollywood Highway, owned by Scott Dillon and CTC Stable, will be handled by Corey Callahan.