Earlier this week, Einstein, a pinto foal, made headlines when he hit the ground at an astonishing six pounds. Now, the much larger Big Jake is also making waves, as he has been measured in as the world's tallest 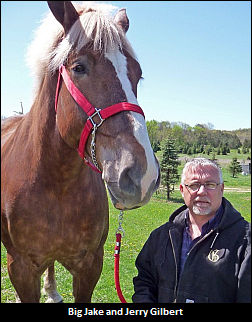 According to Guinness, the world's tallest horse was previously Remington, a 3,000-pound North Texas clydesdale which stands at more than six-feet eight-inches from hoof to shoulder.

According to a report by The Belfast Telegraph, Big Jake, a nine-year-old Belgian gelding, measures in at one quarter-inch short of 6 feet, 11 inches and weighs a stunning 2,600 pounds.

Although his stature may be imposing, to say the least, Big Jake's owner, Jerry Gilbert of Poynette, Wisconsin, claims that the Belgian's disposition is very down to earth.

Gilbert and his family usually show Big Jake as a draft horse in four-or six-horse hitches and raise money for the Ronald McDonald House.

(With files from The Belfast Telegraph)