There were question marks surrounding Jujubee after his win streak was snapped in his Breeders Crown elimination, but the sophomore trotter rewarded the faith of his connections with a determined victory in the $650,000 Breeders Crown Final for three-year-old male trotters on Saturday (Oct. 30) at The Meadowlands. 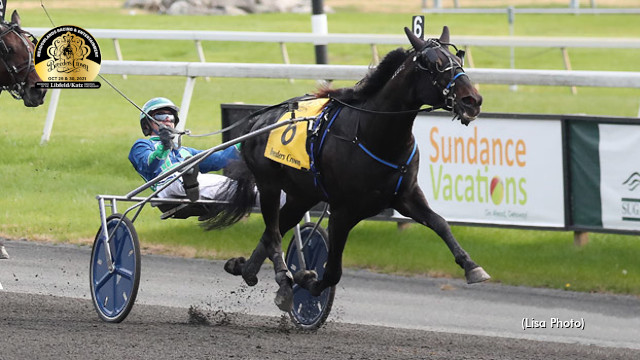 Sent off as the 3/5 choice, Jujubee was pointed to the front by driver Andy McCarthy and he cleared fellow elim winner Ambassador Hanover (Ake Svanstedt) before a hot :26.2 opening quarter. With no outer flow developing, McCarthy was able to ratchet back that early tempo and steal a second quarter breather to trip the half-mile timer in :55.3.

Lucas Wallin was forced to vacate his spot third along the rail with elim winner Cuatro De Julio and advance first-up. Jujubee still had two lengths on the field at the third quarter, reached in 1:23.4. At the head of the lane, McCarthy started to ask Jujubee for another gear as the backfield started to make a dent in the favourite's lead. Jujubee dug deep and held off a swarm of late closers, including Fly Light (Dexter Dunn) and In Range (Tim Tetrick) to prevail in a stakes record 1:51.2.

"I turned him and scored him down a little bit today and he felt terrific," stated driver Andy McCarthy. "You know, it was a big first quarter, it really was, but, I wanted to take chance out of it today and get him where he likes it. He dug deep and was terrific.

"I knew I had the two best horses on my back, and I really tried to slow him down so I knew that have a little pop finishing but he's just so gutsy. He just kind of looks at those horses and he won't let them go by."

"We took the back shoes off him today and that seemed to help him and free him up a bit, and we did some work on him this past week," said Wright. "He was a little dehydrated from shipping and all that. We were able to get him back to closer to 100 per cent and he just showed what a champion he is today."