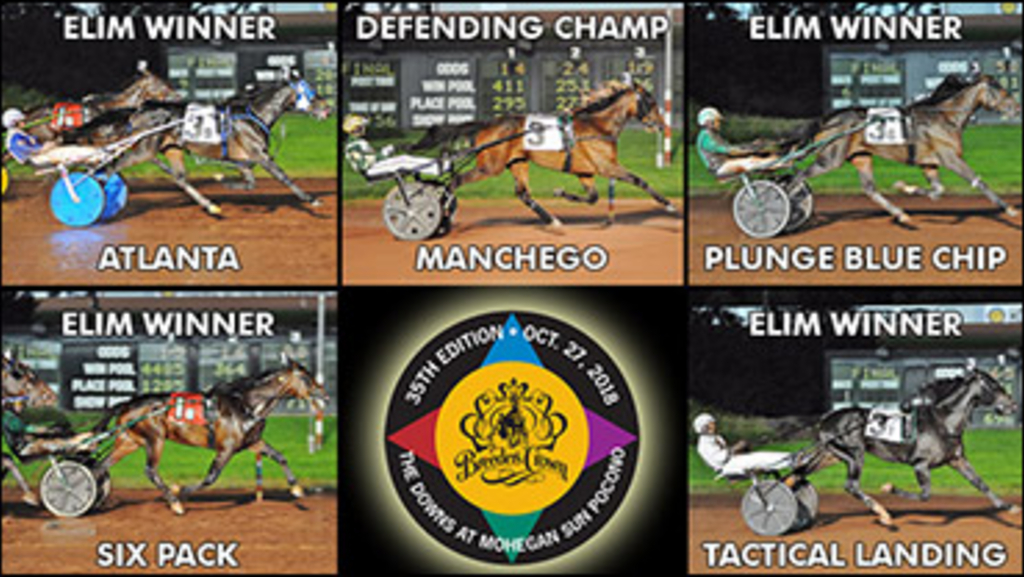 After driving Plunge Blue Chip to victory in her Breeders Crown elimination last weekend, and then watching rival Atlanta win hers, Ake Svanstedt seemed as intrigued as anyone by the possibilities in Saturday’s $500,000 championship for three-year-old female trotters at The Downs at Mohegan Sun Pocono.

“She won easy,” Svanstedt said about Plunge Blue Chip, then added with a smile, “but Atlanta won easy also.

“We’ll see how it goes in the final.”

All 12 Breeders Crown finals, with $6.4 million in total purses, will be raced Saturday at Pocono. Post time is 5:30 p.m. (EDT) for the first race. For recaps from the eliminations, click one of the following links:

Svanstedt has top contenders in each the three-year-old filly trot and $500,000 final for three-year-old male trotters. Plunge Blue Chip is 4-1 on the morning line, the third choice behind 5-2 favourite Atlanta and 3-1 returning champion Manchego while colt Six Pack is the 5-2 morning-line favorite in his event.

Plunge Blue Chip won her elimination by 3-1/4 lengths over Impinktoo in 1:53.3 over a sloppy rain-soaked track. The win came on the heels of her two-heat performance in the Kentucky Filly Futurity on Oct. 7, when she won her elimination in a world-record equaling 1:49.4 but went off stride in the same-day final, which was won by Atlanta.

“She was dehydrated,” Svanstedt said about the miscue. “But (Saturday) she was OK again, normal.”

Plunge Blue Chip has won eight of 14 races and $521,601 this year for Svanstedt, who owns the filly with breeder Blue Chip Bloodstock, Tomas Andersson, and Rick Zeron Stables.

Rick Zeron co-owns, and trains, two other three-year-old filly trot finalists in Atlanta and Courtney Hanover. Zeron will drive Courtney Hanover, a 20-1 shot, in the final while his son Scott will be behind Atlanta. 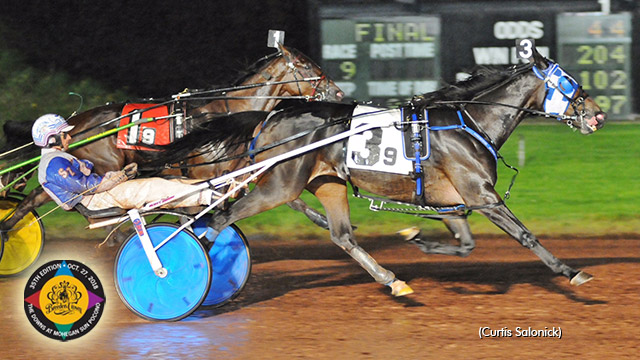 Atlanta, who has won eight of 13 races this year including the Hambletonian Stakes against the boys and banked more than $921,000, captured her Breeders Crown elimination gate-to-wire by three-quarters of a length over Lily Stride in 1:53.1.

“I was not surprised how easy I got away,” Scott Zeron said. “I’m sure Yannick (Gingras with Manchego) was being a little conservative and at the same time I wanted to be conservative as well just to make sure my filly bounced back after the double heats in the (Filly) Futurity. I was able to command the lead early…and from there on when there was nobody power moving, I didn’t think there would, I was able to control the race even more.

“It worried me about bouncing back after the two heats because she didn’t bounce back after the Hambletonian and it took her a little bit to get back into form. It’s nice to see her come :27 on the end (Saturday).”

Manchego finished third in her elimination, won by Atlanta. The Hambletonian Oaks champ has won seven of 13 races and $694,000 this year for trainer Jimmy Takter, driver Yannick Gingras, and owners Black Horse Racing, John Fielding, and Herb Liverman. In her start prior to the Crown elim, Manchego finished third in the first heat of the Kentucky Filly Futurity and was scratched from the final.

“In her last start I was very concerned because she really didn’t have any kick at all,” Takter said. “Her blood work was (no good). Her blood work is on the way up and I needed this start in her.

“Yannick said he had plenty of horse, but on this track here she had a little problem finding her gear really. They were going plenty, the last half in :55.2, so how are you going to make up ground? You don’t make up ground on that. I’ve got a week to figure her out. But I was happy.”

Phaetosive, who topped Atlanta and Manchego in the Elegantimage Stakes, finished fourth in Atlanta’s Breeders Crown elimination and is 5-1 on the morning line. The filly has won seven of 10 races and $564,764 this year for owner Purple Haze Stables. She has been driven throughout her career by trainer Trond Smedshammer, but George Brennan will be in the sulky Saturday.

“I’m just trying to mix things up a little bit,” Smedshammer said. “It’s the last race of the year, so I figured it was time to try something. George is more aggressive than me (and) he is 40 to 45 pounds lighter than me, which I think could be a factor also on a muddy off-track. I think Atlanta is going to try to do the same thing this week that she did last week. That’s what we’ve got to try to stop.

“This track favours certain horses over others and I think Atlanta has a bit of an advantage because of her style of racing on that type of track. Hopefully she won’t have it as easy this week as last week.”

On the colt side, Six Pack enters the Breeders Crown final with a five-race win streak including the Kentucky Futurity and Yonkers Trot. He won the Futurity final in 1:49.1, the fastest mile ever by a three-year-old trotter. Six Pack has won 10 of 13 races and $970,573 this year for owners Svanstedt, Little E, Stall Kalmar FF, and Lars Berg.

Six Pack won his Breeders Crown elimination by three-quarters of a length over returning champion Fiftydallarbill in 1:53.3. 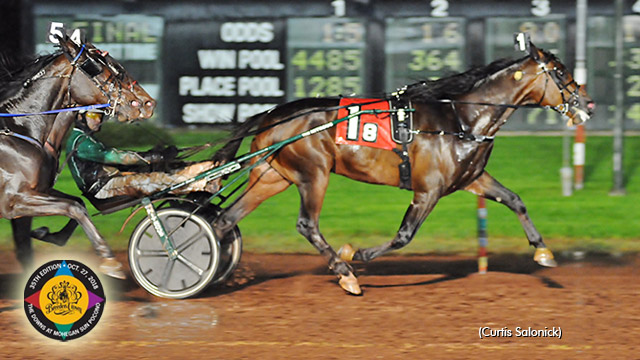 “He was good, but he is so lazy,” Svanstedt said. “He slows down and takes it easy and I must push him. If I relax, he can feel everything, and he takes his chance to be lazy. He can also feel when I’m serious, and then he is a different horse. He is a smart horse. He is a nice horse.”

Tactical Landing, with Brian Sears driving for trainer Takter, won the other elimination by 4-3/4 lengths over Mets Hall in 1:52.2. He is the 3-1 second choice on the morning line. The colt has won seven of 12 races and $392,800 for owner The Tactical Landing Stable.

“He’s got a hell of a set of lungs and he covers a lot of ground,” Takter said. “He’s a fantastic horse.”

Canadian Trotting Classic winner Crystal Fashion is 4-1 and Fiftydallarbill is 5-1.