Field Set For Dream Of Glory 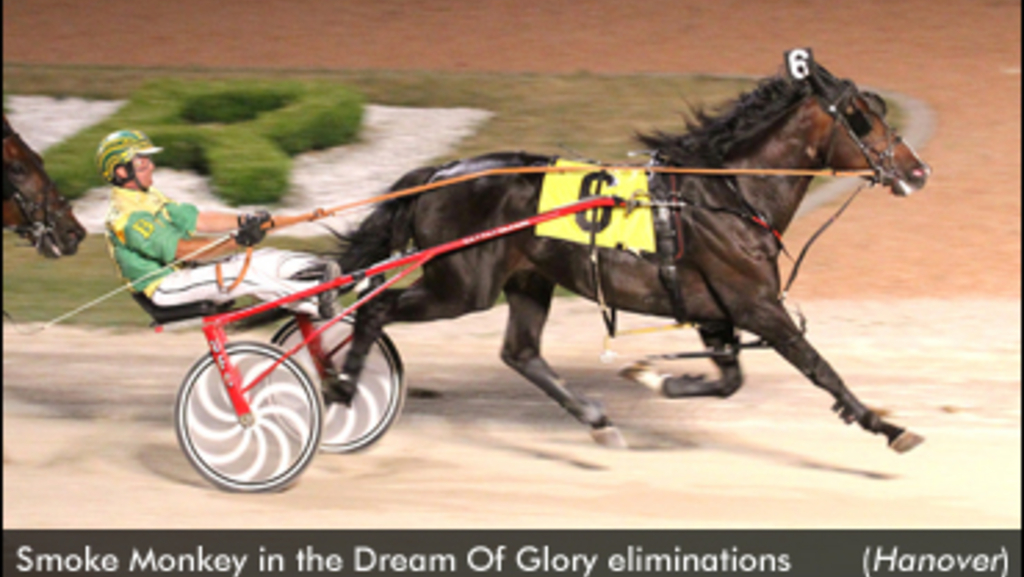 It was the biggest crowd of the season on perhaps the hottest night of the year, as Hanover Raceway hosted two eliminations in the Dream of Glory Trot on Saturday, July 23.

Sixteen horses competed hoping for a top-four spot in order to qualify for the July 30 final.

In the first $12,000 elimination, Wildwild Men used the rail position to his advantage hitting the quarter with a five-length lead in 28 seconds flat. The three-year-old son of Muscle Mass is owned by Catheline Pelletier and Chantal Gravel of Quebec and came into Hanover after back-to-back wins at Hippodrome 3R. Robert Shepherd drove the gelding wire-to-wire for trainer Isabelle Darveau, clocking middle splits of 1:00 and 1:29.3 and the mile in 1:58.4. P C Cantore, owned and trained by Peter Clements of Dobbinton, Ont., was second, with a pair of Keith Jones trainees, Pukka and Chestnut Schofield, finishing third and fourth.

In the second elimination, heavy favourite Sass, coming off a 1:53 mile at Mohawk Racetrack, broke before the start and Smoke Monkey, trained by Rob Fellows and owned by Synerco Ventures of Toronto, grabbed the first quarter lead in :29.1. Bruce Richardson drove the Majestic Son colt wire-to-wire through a half in :59.4 and three-quarters in 1:28.4 to cover the mile in 1:58.2. Gonna Fly, starting from post eight, managed to manoeuvre around Sass and finished second for trainer Bob McIntosh and co-owner Earl Hill Jr. of Oshweken, Ont., while P C Foreign Affair was third for Curtis Clements of Dobbinton, Ont., and Very Classy finished fourth for part-owner and trainer John Bax of Campbellville, Ont.

It was a busy night with fans taking part in the Wanna Drive program, and I Love Canadian Harness Racing Fan Club was on hand with prize draws and information. Hanover also played host to former NHL great Keith Primeau and Connor Roberts of Owen Sound, Ont. who was drafted third overall by the Hamilton Bulldogs of the OHL. The two men signed autographs and helped assign the post positions for the eight Dream of Glory qualifiers.

Dream of Glory Day will include a 'Beef on a Bun' BBQ at 5 p.m., a live band, and after the races, a huge BEM Fireworks display. Post time next Saturday is 6:15 p.m. and the doors open at 5 p.m. Hanover is expecting close to 4,000 fans to attend.

Below are the results of the post position draw for the $77,000 (estimated) Dream of Glory Final

(With files from Hanover Raceway)