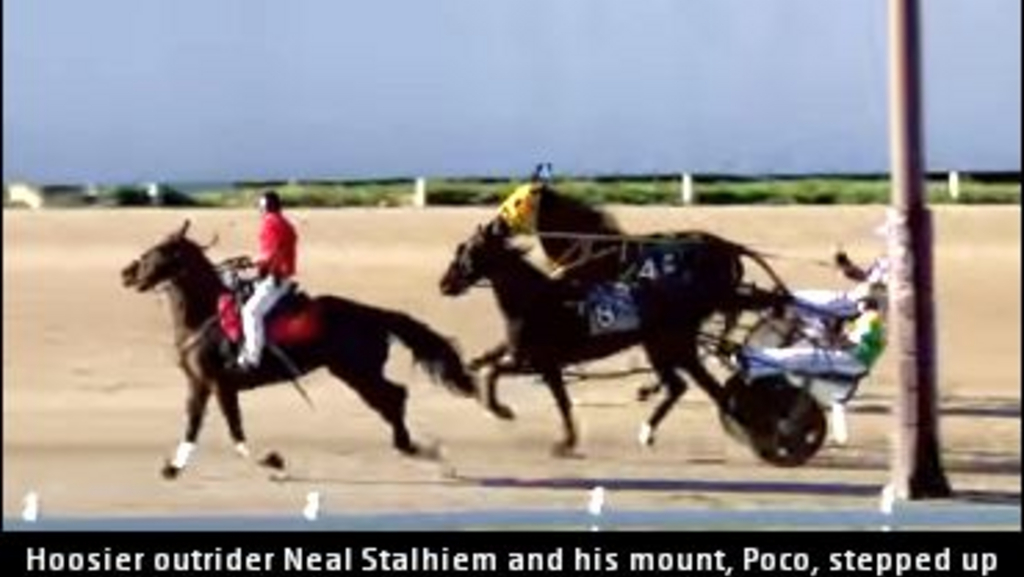 Much like a top baseball relief pitcher, outrider Neal Stalhiem stepped in to get the save on a night where things could have taken a turn for the worse.

Due to the swift and precise response of Hoosier Park Racing & Casino’s outrider, Neal Stalhiem, injuries were avoided when unforeseen broken equipment occurred in Race 5 on the 14-dash card at Hoosier Park on Tuesday, June 21. Stalhiem’s expertise was on full display as he carefully guided JDS and driver Trace Tetrick to safety after an equipment malfunction at the start of the race. Tetrick’s right line broke behind the starting gate making for a perilous situation where he was unable to steer or stop the horse.

Tetrick began alerting the rest of the drivers in the field as Stalhiem got in position to make his move. As the field approached the final turn, Tetrick was in front of the rest field, but merely a passenger as JDS continued at full speed for the finish line. Stalhiem quickly maneuvered his horse alongside JDS and just as the field rounded the final turn, he was able to make the grab. With JDS in tow, Stalhiem was able to guide Tetrick to safety while the rest of the field completed the race. Both JDS and Trace Tetrick returned to the barn unharmed.

“Protocols and safety measures are always in place and we hope we never have to use them,” Hoosier Park’s vice president and general manager of racing, Rick Moore, noted. “However, tonight proved that those protocols paid off. Our equine and human athletes’ safety is first and foremost to everything we do here, and we want to thank and congratulate outrider Neal Stalhiem on a job well done here tonight!”

While Stalhiem’s efforts were nothing less than outstanding, credit should also be extended to his horse, a 13-year-old Quarter Horse named Poco. Stalhiem and Poco have been a team for over five years at Hoosier Park.

Why was this not declared no

Why was this not declared no contest ?