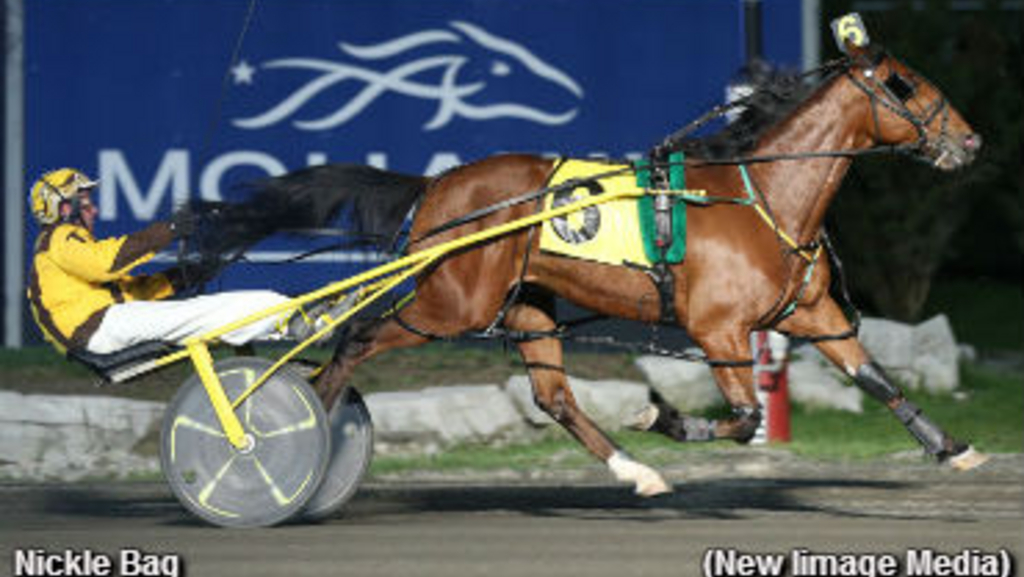 The majority of the public’s money went on the nose of State Treasurer in Saturday’s $34,000 Preferred Handicap for pacers at Mohawk Racetrack, but Nickle Bag rained on the favourite’s parade thanks to his eye-catching score in 1:49 – the fastest mile of the season in Canada.

Nickle Bag was hustled to the lead from Post 6 by reinsman Trevor Henry, and together they led the field through fiery fractions of :26, :54.3 and 1:22.3. A :26.2 closing quarter helped propel the gelding to the win by 4-3/4 lengths over Mohawk Warrior and The Rev.

Bill Robinson trains the six-year-old son of Rocknroll Hanover-Buckle Bunni for Linda Loyens of Denfield and Harry Loyens of Ilderton, Ont. The speedster improved this season’s record to 9-1-4 from 15 tries, while pushing his lifetime win total to 28. He’s banked in excess of $167,000 this year and more than $627,000 to date.

Saturday’s card also featured the secnd leg of The Diplomat Series for three-year-old pacing colts and geldings who were non-winners of $100,000 in 2015.

War N Munn captured the $20,000 opening division in 1:52 for driver Jonathan Drury and trainer Carmen Auciello. The son of Stonebridge Regal-Stonebridge Venus got away fourth before advancing first-over on the way to the three-quarter pole. He chipped away and eventually drew clear to win by 2-1/4 lengths over Shocking Image, with Mach Power a distant third.

Sent off as the 2-5 favourite, the colt won for the fifth time this season for owner George Munniksma of Washington, NJ. The seven-time winner lifted this year’s cash stash to $76,250 while his lifetime total climbed to $119,261 with the win.

Richard Moreau trains the homebred son of Mach Three-Perfect Sport for owner/breeder Gerrie Tucker of Montreal, QC. As a rookie the pacer assembled a 3-1-2 record from 12 starts. The five-time winner has made $56,845 from 14 starts.

Richard Moreau trains the five-year-old daughter of Dali-Whitesand Gem for Alagna Racing LLC of Manalapan, NJ and Brad Grant of Milton, Ont. The win improved this year’s record to 3-5-0 from 10 trips to the track. The 17-time winner now boasts a bankroll of $$291,598.

Earlier on the card, Newbie extended his winning streak to five-in-a-row thanks to a 1:50.1 score in a $22,000 conditioned event. Trevor Henry mapped out a two-hole trip for the Ben Wallace pupil, who popped out in the lane and drew clear to win by 1-1/4 lengths over Drachan Hanover. Velocity Driven was third.

Let go at odds of 11-1, the four-year-old son of Always A Virgin-Nat A Tat Tat lifted his lifetime earnings to $123,655 for partners Larry Ainsworth of Petrolia, Ont. and William Boden of Vancouver, BC. The 17-time winner is 6-for-8 this season.