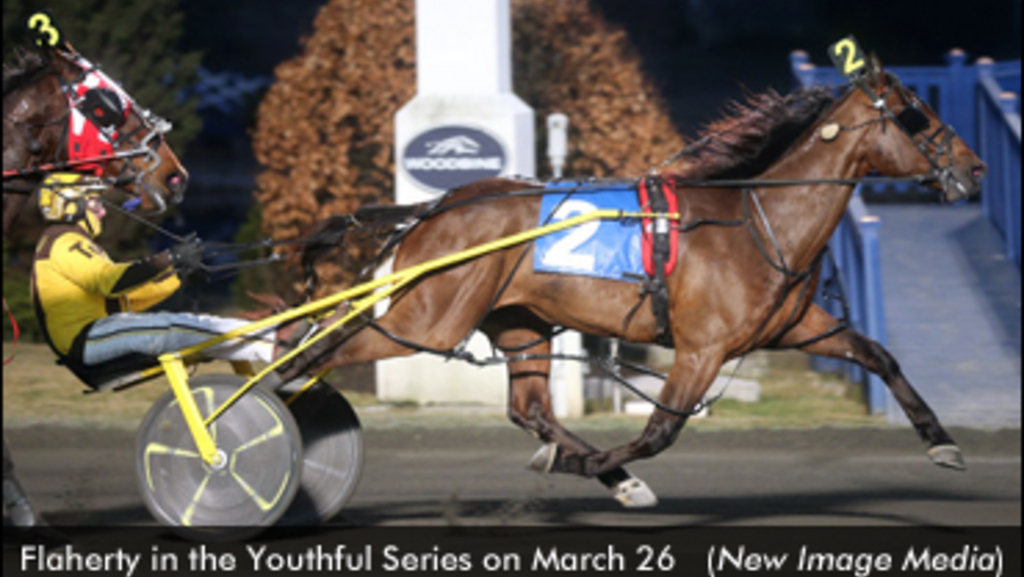 The Youthful Series is for three-year-old pacers that are non-winners of three races or $15,000 in 2015. The first leg featured two $17,000 divisions with Flaherty the fastest of his foes, scoring in a career-best 1:51.3.

Flaherty took the lead from post two in the opening division and cruised through fractions of :27, :55.4 and 1:24.2 before sealing the deal with a :27.1 final frame. Sporty Mercedes (James MacDonald) followed in the pocket throughout and finished one length behind the winner after tipping out down the lane. Mach Power (Randy Waples) followed in third.

Trevor Henry drove the 3-5 favourite to the victory for trainer Bill Budd, who shares ownership with the Macks Stable and Joe Carnovale of Stoney Creek, Ont. After making just one start as a two-year-old, the Up The Credit-Ingrid Bergrin gelding has finished no worse than second in five sophomore starts, including wins in his last three race. The series win puts his bankroll at $31,000.

Easy Lover Hanover prevailed by a neck in 1:53 in the second division with Jody Jamieson working out the winning two-hole trip for trainer Ben Wallace and owner Brad Grant of Milton, Ont.

The 1-5 favourite tracked eventual third-place finisher Gotti (Trevor Henry) through panels of :27.3, :57 and 1:25.2 before War N Munn (Jonathan Drury) accelerated out of third, but then blew the final turn. Easy Lover Hanover went by Gotti in the stretch and held off the re-rallying War N Munn in a :27.1 final quarter.

The Somebeachsomewhere-Easy Go Go colt, who was a $70,000 January Select Mixed Sale purchase, has won five races in a row since joining the Wallace stable. He now has six wins in nine career starts and earnings totalling $52,800.

Between the series action, Preferred pacer Nirvana Seelster lowered the Canadian season's record to 1:49.1 in rein to Rick Zeron, giving Bill Budd a training double on the card.

Nirvana Seelster was a persistent leader through :25.4 and :53.4 first-half fractions, taking charge from post eight and then retaking the lead when Wazzup Wazzup (Jody Jamieson) cleared. The 7-1 shot then cruised past three-quarters in 1:22 and prevailed by one and three-quarter lengths over the quick-closing Boomboom Ballykeel (Jonathan Drury) while Wazzup Wazzup (Jody Jamieson) followed in third and edged out The Rev (Doug McNair), who had tipped out down the stretch off a three-hole trip. Favourite Nickle Bag's (Trevor Henry) six-race win streak came to an end as he finished fifth after a parked-out journey from an outside post nine start.

Following a 1:50.2 front-end victory from post eight in a upper-level condition event last Saturday, Nirvana Seelster paid $16.60 to win. He is now three-for-10 this year with an annual income of $77,000 for owner Bruce Davy of Brockville, Ont. The five-year-old Camluck gelding is an 18-time career winner with earnings totalling $383,906.

Richard Moreau led all trainers for wins on Saturday's 10-race card, teaming up with driver Sylvain Filion for three.