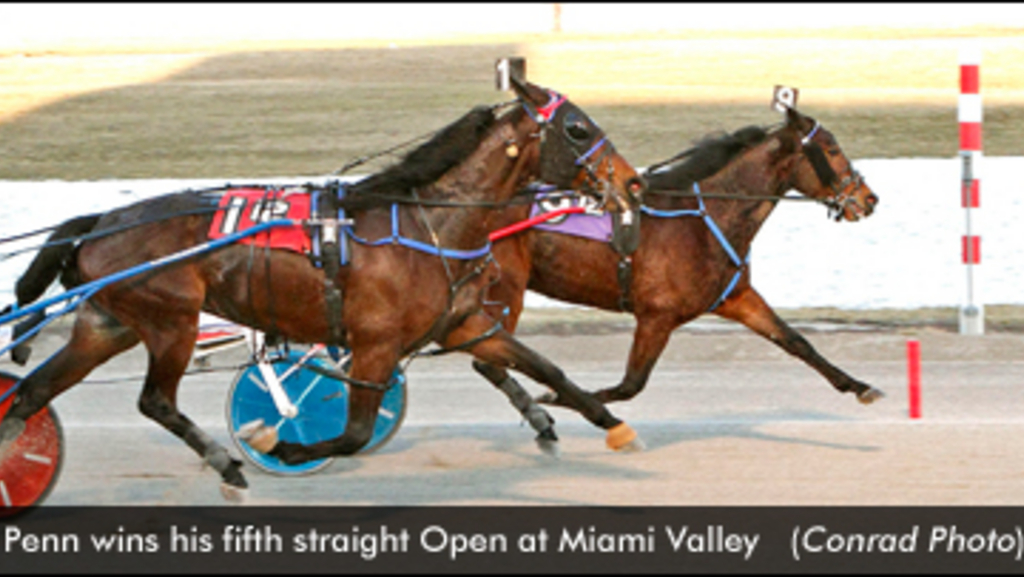 Trainer Bobby Brower is racing the six-year-old gelded son of Master Glide sparingly in an effort to keep him sharp through a long 2016 campaign he has charted out for him. To date, the plan is working to perfection.

Despite a four-week respite prior to his latest victory, Penn was fired out from behind his assigned outside post position behind the gate by leading driver Josh Sutton. Despite being three-wide much of the first quarter, Penn collared Blackwolf Run (Randy Tharps), who had left alertly, as the quarter was reached in :27.3 and crossed over to the front just steps thereafter. Sutton was then able to ‘steal’ a relatively pedestrian :58.2 middle half before sealing the deal with a :28.4 closing panel for the 1:54.4 victory. The even-money favourite did get quite a scare from the only mare in the field, longshot Dancing Dynamite (LeWayne Miller), who made a valiant stretch bid that fell just a head short. Martz Time (John DeLong), who was last week’s feature race winner, rallied for the show spot ahead of Ohio newcomer Cimeronken (Kyle Ater) and Blackwolf Run (Randy Tharps), who picked up the minor spoils in the full field of 10.