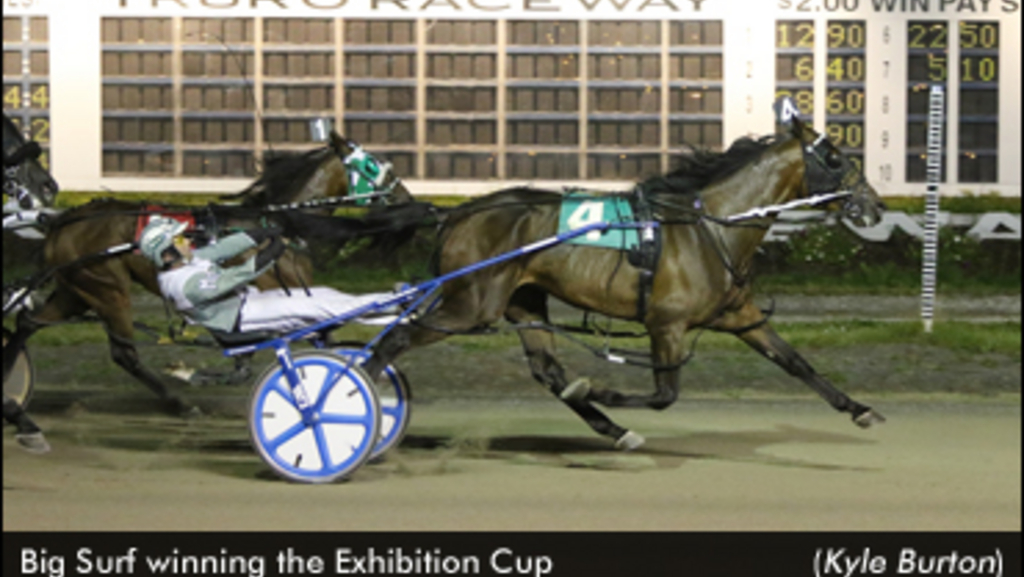 Big Surf equalled the all-age track record at Truro Raceway on Saturday with a 1:53.2 victory in the $7,500 Exhibition Cup Invitational to close out the evening's action-packed card of harness racing.

Driven by Marc Campbell, Big Surf blasted off the wings of the gate in the finale and never looked back as he raced through fractions of :27.4, :56.2 and 1:24.4 en route to the 1:53.2 victory. Big Surf was followed by All Turain and Corey MacPherson to give trainer Trevor Hicken a 1-2 finish in the Cup. The Rev and Danny Romo moved first up from third heading towards the final turn and finished one and a half lengths behind. 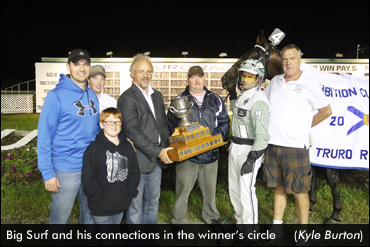 Big Surf joined Dunachton Gale, who originally set the track record in 2006, along with Formal Affair and Duke Did It in the record books.

The four-year-old Somebeachsomewhere gelding is owned by Burkie By The Bay Stables of Ten Mile House, P.E.I. and Perry Burke of Grosse-Ile, Que. He now has five wins in eight starts racing in the Maritimes this year.

Campbell also won the fastest of three $6,960 "A" divisions of the Atlantic Sires Stakes with three-year-old pacing gelding Proven Desire, who fought off Ultimatelyhandsome to prevail by two and a half lengths in 1:56.3. Pictonian Edge finished third. Campbell trains the Proven Lover-Shark Like Lady gelding, who is now six-for-eight this season with back-to-back sires stakes victories. Blair Hansen and Meghan MacDonald of Charlottetown, P.E.I. and John Thomas of Dartmouth, N.S.

Fresh off a "B" division win at Summerside Raceway, R Es Aiden stepped up to the "A" level and won the other Saturday night division in 2:00.4. Driven by Rodney Gillis, the Force Of Life-Kona Queen gelding wore down the pacesetting George and prevailed by one and a quarter length over Ross Melvino, who tracked his cover. Trainer Don Beaton co-owns R Es Aiden with Adam Pond of Fort Mcmurray, Alta. and Damian MacInnis of Port Hood,N.S.

The first of two $2,500 "B" divisions was won by Gotta Move (Ameripan Gigolo-Got You Beat) and Paul Langille in a career-best clocking of 1:59 for trainer Bernard McCallum and owner Debbie Denney of Mount Uniacke, N.S. Buntainwood Farm's Eliminator victorious in a new mark of 1:59.4 in the other split for Barrieau and trainer Nick Oakes.

His sires stakes wins were only part of a big night for Barrieau, who joined forces with trainer Jackie Matheson to sweep the second leg of the the Atlantic Aged Pacing Mares Series, winning the $3,315 divisions with For All We Know and General Luckypercy.

For All We Know was reunited with Barrieau, who drove her to victories in two legs of the series last year, and they wore down pacesetter Dirt Track Momma in a final quarter duel for the 1:56.2 victory. The eight-year-old Rocknroll Hanover mare is a 25-time career winner, but picked up her first victory of the year for owner Bruce Wood of Marshfield, P.E.I.

"It seems to me I like her better this year than last year actually," said Barrieau. "It's the first time I got to drive her this year so hopefully she'll stay good for the rest of the season."

Fresh off a victory in the Governor's Plate Mares Open, General Luckypercy edged by Best Risque into the final turn and prevailed by one and a quarter lengths in 1:56.4. Jodi Lynn Matheson of Charlottetown owns the nine-year-old Blissfull Hall mare, who has three win in nine starts so far this year. The series defending champion Ramblinglily pulled up with broken equipment.

Just Lovey pulled off a 13-1 upset in the $4,200 final of the Wilsons Home Heating Fillies & Mares Series after a front-end duel with elimination winner Scotian Lass. She prevailed in 1:59.4 by three-quarters of a length over the closing favourite, Maiden Heaven. Dale Spence drove the six-year-old Western Paradise mare for local owners Sarah Bruce and trainer Nicholas White.

The Atlantic Aged Mares Pacing Series, which is co-sponsored by Standardbred Canada, Red Shores and participating host tracks, is restricted to aged pacing mares that are Canadian sired and/or 100 per cent Canadian owned. The third leg will take place on August 29 at Exhibition Park, followed by the fourth leg on September 19 at Charlottetown Driving Park and the final on October 4 at Summerside Raceway.

Meanwhile, the next Atlantic Sires Stakes event will take place on August 2, when the three-year-old pacing fillies facing off at Inverness Raceway. The sophomore colts will be back in action on August 17.