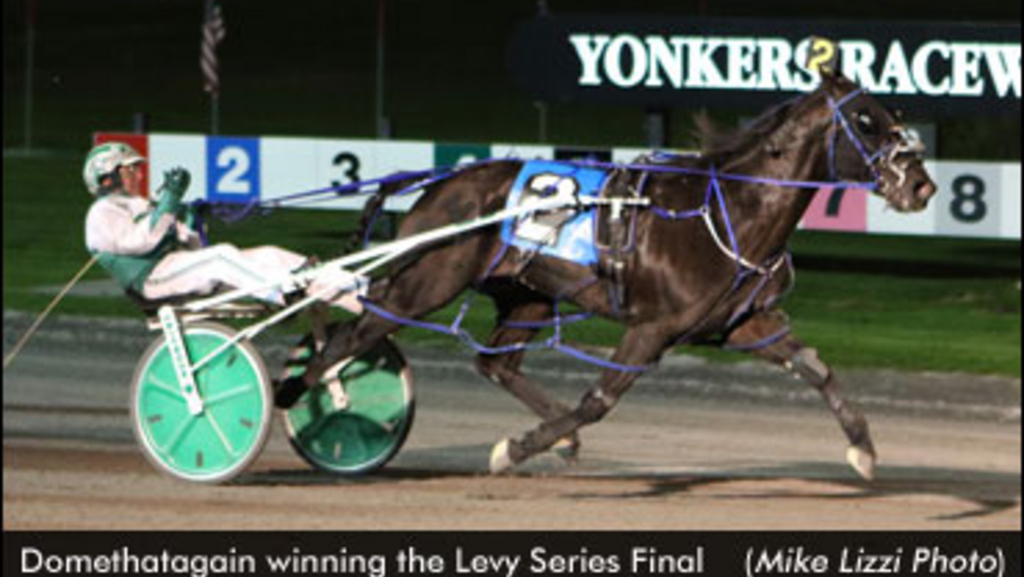 Starting from the inside post position in the Free-For-All event -- harness racing’s richest race of the season to date -- Domethatagain saw defending series champion P H Supercam (Jason Bartlett) leave like a shot from the far outside.

P H Supercam’s job was made much easier when the three horses directly inside of him — 6-5 favourite Take It Back Terry (George Brennan), Polak A (Brian Sears) and “Supercam’s” stablemate, Mach It So (Tim Tetrick) — were all off the gate.

P H Supercam made the lead before a :27.2 opening quarter-mile. Domethatagain was away second, with Lucan Hanover (Dave Miller) third.

“Lucan” was out early, instigating the issue toward a spiffy, :55.3 intermission, while Beach Memories (Yannick Gingras) chased from second-over.

P H Supercam and Lucan Hanover dropped the gloves in a :27.2 third quarter (1:23), with the former clinging to a short lead into the lane. Domethatagain then angled inside, getting first “run” and drawing out. He bested a third-over Take It Back Terry by a length in 1:51.1.

Beach Memories was third, with P H Supercam fading to fourth. Mach It So earned the final pay envelope, with Windsong Jack (Eric Carlson), Polak A and Lucan Hanover rounding out the order.

The final time made it the fastest local mile of the season and one-fifth off the stakes record (Maltese Artist’s [Greg Grismore] 1:51 in 2007).

For fifth choice Domethatagain, a six-year-old son of Bettors Delight trained by Rene Allard and owned by Allard Racing of Saint-Esprit, Que., Bob Hamather of Exeter, Ont., and Bruce Soulsby of Powell, Ohio, it was his second win in seven seasonal starts. The exacta paid exacta paid $70.50, the triple returned $391 and the superfecta paid $739.

“I was surprised to see [P H Supercam] coming at me so early, because he usually doesn’t leave that fast,” Dube — winning his first Levy — said. “I had no problem sitting behind him and it worked out perfectly. He’s hasn’t always been same horse every week, but he was very good tonight.”

“We weren’t happy with the way he was handling the track, so we tried plastic shoes up front,” Allard said. “We thought he’d be better with them, and obviously it helped.”

Not to mention a helluva trip.

The 28th edition of the Levy again honoured the Hall of Fame founder of Roosevelt Raceway, with the Levy family in attendance to make the winner’s circle presentation.

“The last quarter is her best quarter.”

Such was pre-race assessment and post-race reminder from Jason Bartlett after Venus Delight ($5.80, part of entry) prevailed from the pocket Saturday night, winning Yonkers Raceway $261,000 final of the Blue Chip Matchmaker for Open pacing mares. 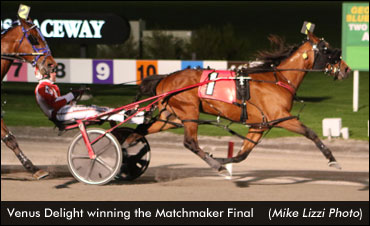 Starting from the inside post position in harness racing’s second-richest race of the season to date (behind the final of the Levy), Venus Delight gave up the early baton to last season’s runner-up, Yagonnakissmeornot (Brian Sears).

That one laid down early intervals of :27-seconds flat and :56.1 before her stablemate/entrymate Carolsideal (Dan Dube), the other half of the 1-2 favoured proposition, moved from fourth.

“Yagonna” and “Carol” moved in tandem toward a 1:24.4 three-quarters, with “Venus” pocketed and Monkey In My Wheel (Dave Miller) working from second-over. Yagonnakissmenot maintained a tenuous lead in and out of the final turn, but Venus Delight was waiting for her close-up.

She ducked in and went by a stubborn leader, prevailing by three-quarters of a length in a season’s-best 1:52.4. Carolsideal held third, with Fancy Desire (Yannick Gingras) and the winner’s pari-mutuel partner, Krispy Apple (Tim Tetrick), grabbing the final two pay envelopes. Monkey On My Wheel, String (Eric Carlson) and the retiring Camille (George Brennan) completing the order.

For second choice (with her stablemate) Venus Delight, a five-year-old daughter of Bettors Delight owned by Bamond Racing LLC and trained by Jeffrey Bamond Jr., it was her third in in five seasonal starts. The exacta paid exacta paid $8.10, with the triple returning $19.80.

“Last week [in the final series preliminary leg], I wanted to see her on the front because she hadn’t been there in so long,” Bartlett said. “She didn’t seem as comfortable. She’d rather have a target to go after.”