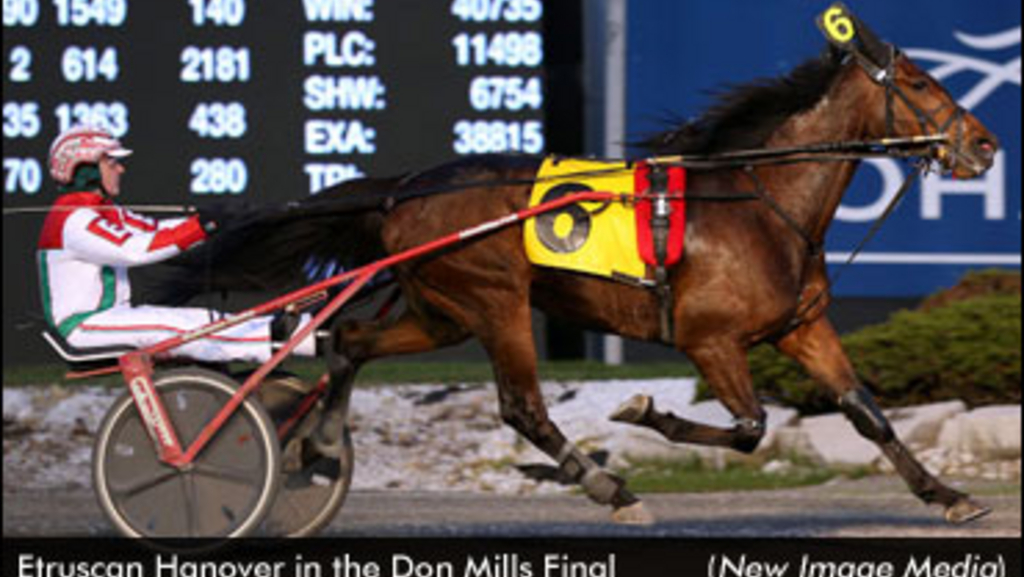 The conditions might have been a bit chilly, but Etruscan Hanover was sizzling Saturday night, setting a Don Mills stakes record at Mohawk Racetrack.

A field of eight four and five-year-old trotters took to the track Saturday evening for the $44,400 final of the Don Mills Trotting Series. The series finale appeared to be a competitive contest on paper, but Etruscan Hanover would turn the final into his personal showcase.

Driven by Mario Baillargeon, Etruscan Hanover sprinted off the gate to the front and posted a speedy opening quarter of :26.4. The fast first quarter would be a sign of things to come, as Etruscan Hanover carved out fractions of :55.1 and 1:24 to bring the field into the stretch.

Bourbon Bay, the 4-5 favourite, appeared to be getting a nice two-hole trip in behind the leader, but would be no match for Etruscan Hanover in the lane.

Etruscan Hanover trotted home in :28.2 to score a three and one quarter length victory over Bourbon Bay and establish a new Don Mills stakes record of 1:52.2. The time of the mile was also a Canadian season's record for trotters.

Exemplar finished third, while Wild And Crazy Guy was fourth.

A five-year-old son of Donato Hanover, Etruscan Hanover is trained by Ben Baillargeon, who shares ownership with Santo and Nunzio Vena and Claude Hamel.

The gelding trotter has had breaking issues throughout his career, but continually posts successful results when he minds his manners. Etruscan Hanover now has a record of three wins from nine starts this season.

The Don Mills triumph is the 10th career victory for the Baillargeon trainee and increases his bankroll to over $87,000. The 1:52.2 clocking knocks more than three seconds off Etruscan Hanover’s previous career mark.

In other series action, J Js Delivery shot up the rail late to pull off a 23-1 upset in the first leg of The Diplomat.

A field of nine three-year-old pacing colts and geldings lined up Saturday for the first round of The Diplomat Series.

J Js Delivery and driver James MacDonald were the quickest off the gate and posted a solid opening quarter of :26.1. American Rock, the Youthful Series winner and 9-5 second-choice, was parked around the first turn and would overtake the lead as the field rolled into the backstretch. The half was reached in :55.3.

North America Cup eligible The Wayfaring Man, the 3-2 favourite, came charging first up from fourth around the final turn to tango with the leader down to the three-quarter pole in 1:25.1.

In the stretch, Good Friday Three came off the cover of The Wayfaring Man to pace by the leaders and appeared to be on his way to victory. However, MacDonald found room up the rail in deep stretch to allow J Js Delivery to charge through and score a half-length victory over Good Friday Three in 1:52.2.

Star Cover came on late to finish third, while The Wayfaring Man and American Rock had to settle for fourth and fifth, respectively.

A son of Jeremes Jet, J Js Delivery was making his second start for new trainer Dave Menary on Saturday night. The three-year-old gelding is now two-for-two out of the Menary barn and has a record of three wins from five starts in 2015.

J Js Delivery, who is owned by Robert Hamather, now has five career victories and earnings of $66,686. The clocking of 1:52.2 drops more than a full second off of the gelding’s previous career mark.

In order to be eligible to The Diplomat, the sophomore pacing colts and geldings had to be non-winners of $100,000 in 2014.

The second leg of The Diplomat will take place next Saturday (May 2).

Jonathan Drury drove the seven-year-old gelded son of Mach Three, a winner of four of his 12 starts this year, for trainer Carmen Auciello and co-owner Stephen Klunowski. His 30th career win brought his earnings within $30,000 of the million-dollar mark.

Evenin Of Pleasure became the nation's fastest winner of 2015 with his 1:49.2 pylon-skimming triumph in a $24,000 conditioned pace. Driven by Sylvain Filion for trainer Richard Moreau and owner Gestion Jean Yves Blais, the five-year-old son of Dragon Again equalled his lifetime mark in defeating the late-closing Piston Broke and Musselsfrmbrussels, who had carved out fractions of :26.2, :54.3 and 1:22. The $23.10 win was the first this year for the 2014 Mohawk Gold Cup upsetter.