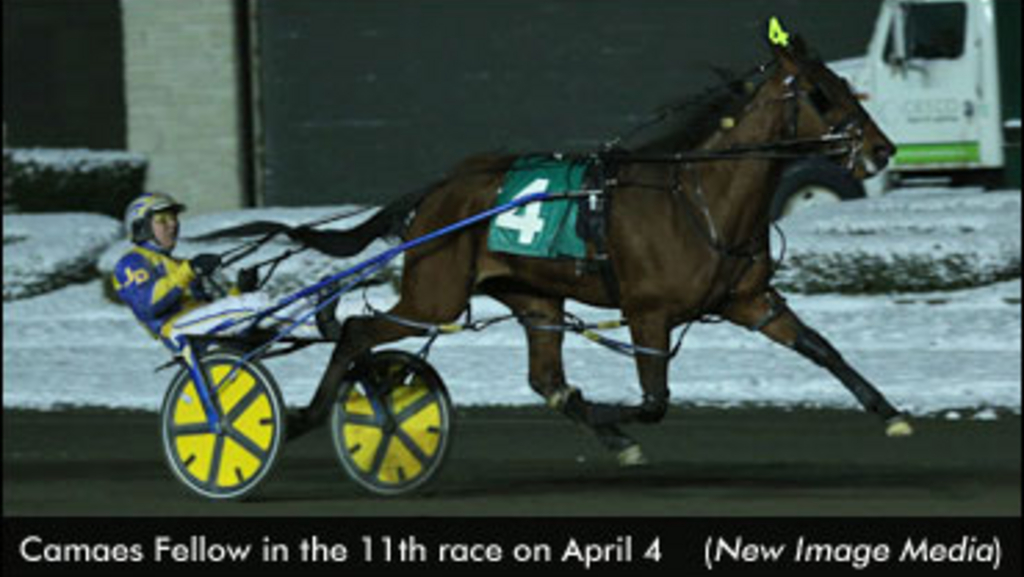 Saturday's harness racing card at Woodbine Racetrack was full of series and Preferred action, but one of the most talked about races of the night was the finale with a mandatory payout on the Jackpot Hi-5 wager.

The Jackpot Hi 5 requires handicappers to select the top five finishers in exact order on the last race of the card. The entire pool is only paid out if there is a single winning ticket, which last occurred on December 8, 2014.

The $35,000 conditioned pace consisted of a 12-horse field with trainer Carmen Auciello and Stephen Klunowski's Camaes Fellow delivering as the 4-5 favourite in rein to Jonathan Drury and leading the 4-2-8-12-6 winning combination.

The Rev was first to get a call off the gate, but Camaes Fellow had his sights set on the top spot and took over command through a hot :26.2 opening quarter while Joshua My Boy was left parked out.

Camaes Fellow continued to lead the field through a half in :54.3 and three-quarters in 1:23 while the outer flow developed.

Bilbo Hanover (4-1) attempted a three-wide move from second over around the final turn, but got rough-gaited outside of Joshua My Boy. However, he managed to re-rally in the stretch on the far outside and came on for second with Cougar Hall (7-1) and Regal Son (12-1) closing off cover in between for third and fourth-place. The Rev (11-1) completed the top five finishers inside off the pocket trip.

A judges' inquiry into Bilbo Hanover's break in stride found that he did not violate any rules and remained the runner-up to Camaes Fellow, who had won by a length and a half in 1:52.3.

Saturday's card featured the second leg of the Youthful Pacing Series, with driver Doug McNair winning both $15,000 divisions. The series is for three-year-old colts and geldings that were non-winners of three races or $15,000 in 2014.

Legion Of Boom ($7.10) earned his second series victory as he rallied home off cover to defeat fellow first leg winner Dialamara in a new lifetime mark of 1:53.4. McNair drives and co-owns the gelded son of Artistic Fella with Equus Standardbreds Inc. while his father Gregg handles the training duties.

Dialamara, the 1-2 favourite, led the field through fractions of :27.3, :56 and 1:25.1 and began to open up a couple lengths as he turned for home. However, Legion Of Boom, who followed along in sixth through the opening panels before moving second over, had fanned off cover and was just beginning to kick into the high gear. He sprinted home in :27.3 to overtake the pacesetter and score by half a length. Giovanni finished over two lengths behind in third off a pocket trip.

McNair later won with the Ben Wallace-trained American Rock ($6.30), who equalled his lifetime mark of 1:54.1 over the track that was downgraded to "good" after some Spring snow flurries rolled in.

Sent postward as the 2-1 second choice following a close runner-up finish to Dialamara last week, Brad Grant's American Rock swept up from third after the :27 opening quarter and confronted early leaver Nobettorplacetobe as they hit the half in :56.1. American Rock went by that rival and continued on past three-quarters in 1:25.1. Down the stretch, the Rocknroll Hanover colt held off the pocket-pulling Nobettorplacetobe and the oncoming 6-5 favourite, Team Captain, for the one-length victory.

Favourite Daylon Magician ($3.30) matched his 1:54.2 winning time from his seasonal debut last weekend when he wore down race leader Cool Guy in Saturday's Preferred Handicap Trot. The career winner of $1.8 million advanced first up from third at the half and pulled away down the stretch for the three-length victory. Jack Moiseyev trains and drives the seven-year-old son of Kadabra for Daylon Farms Ltd. Rockin With Dewey came on for third.

Driven by Trevor Henry, pacer Nickle Bag ($8.60) won a :26.3 first quarter battle for the lead and later held off the late-closing 6-5 favourite, Apprentice Hanover, by a neck for the 1:52 triumph. Alexas Jackpot finished one and a half lengths behind in the compact field, which was scratched down to just five starters with Avatartist sick. Bill Robinson trains the winning five-year-old Rocknroll Hanover gelding, who went over the $400,000 career earnings mark for co-owners Linda Loyens and Harry Loyens.

The final card of the Woodbine meet is Monday, April 6 (7:25 p.m. post time) then harness racing resumes at Mohawk Racetrack on Thursday, April 9. The $30,000 (added) Youthful final will be held next Saturday, April 11 at Mohawk.