Designed To Be Equals Simcoe Record 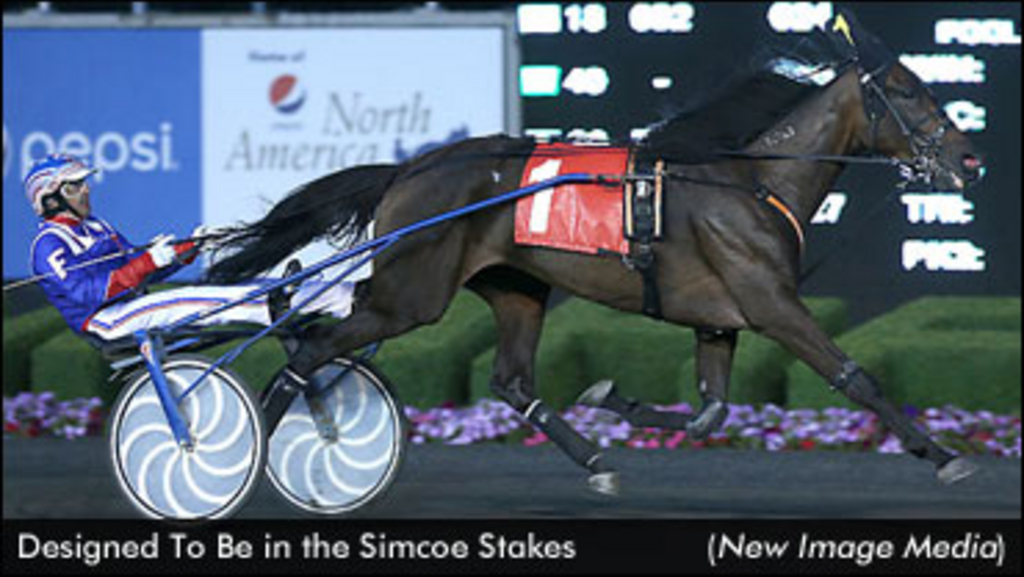 Sent postward as the overwhelming 1-9 favourite, Designed To Be ($2.10) tracked down 10-1 second choice Scream And Shout to tie the Simcoe Stakes record for three-year-old trotting fillies in 1:52.3 early Friday night at Mohawk Racetrack.

Designed To Be equalled the record set by 2013 Canadian and U.S. Horse of the Year, Bee A Magician. The homebred Donato Hanover filly out of Sheer Soul is owned by Al Libfeld of Pickering, Ont. and Toronto's Marvin Katz.

In the first of two $103,845 divisions, Scream And Shout and Brett Miller crossed over from their post six starting spot and led the field through fractions of :27.1, :56.1 and 1:24.2 while building up a four length leading margin. Down the backstretch, Sylvain Filion sent Designed To Be first over from fourth and cruised past the leader in the stretch to score the three length victory. Scream And Shout stayed for second and Muscle Babe finished third with James MacDonald aboard.

"Brett was trying to give us the slip, but we caught them in the nick of time," said winning trainer Julie Miller. "She's a versatile mare, but it just seems like the way the races are setting up she needs a target and she's willing to follow and attack."

Designed To Be, this year's Hambletonian Oaks runner-up, has hit the board in all seven of her starts this year while earning three wins and over $300,000 in purse.

"She's had some issues over this year and last year and she's all heart and gives 110 per cent no matter what," said Miller.

Miller also provided an update on her husband, driver Andy Miller, who is recovering from injuries suffered in a racing accident on April 15 at Yonkers Raceway.

"He's doing really well," she said. "He's in physical therapy and we go back October 8th for a six month check up and we're hoping to get the green light so he can drive again."

Filion earned another stakes victory with the popular Ron Burke-trained Habitat ($3.40) rolling wire-to-wire in the first of two $124,621 Champlain divisions for two-year-old trotters.

Leaving from post one, 3-5 favourite Habitat carved out panels of :27.4, :58 and 1:26.3 while building up an insurmountable lead and cruised home for the 1:55 triumph. Early trailer Muscle Diamond and Rick Zeron closed well for second, finishing two and a half lengths behind, while Aldebaran Eagle and Doug McNair came in for third.

"I was talking to Yannick [Gingras] the other day and he told me just to be a bit careful behind the gate and once he's off the gate he said he's just perfect and he was right," said Filion. "He's not very big, but he's very powerful.

"Coming for home, he got a little lost on the front end out there on a big track like this and I could here Ricky coming for me and so I just asked him a bit and he took off."

The Conway Hall-Habits Best colt was making his fifth career start and earned his third win in a row for owners Burke Racing Stable LLC, Our Horse Cents Stables, and Weaver Bruscemi LLC. His earnings soared to $94,838.

French Laundry ($3.40) took over command at the half and trotted on to win the second Champlain division for driver Brett Miller and trainer Jimmy Takter.

The 3-5 favourite got away fourth, but followed Lookslikeachpndale and Filion as they swept to lead after a :28.4 opening quarter. Hot on their heels, French Laundry and Miller took over as they hit the half-mile mark in :57.4. French Laundry continued to lead past three-quarters in 1:27.2 and into the stretch while opening up three lengths on top to secure the 1:55.4 triumph. Dont Rush and Chris Christoforou advanced first over into second while Lookslikeachpndale finished third.

"He's a very nice colt. I've raced against him many times and he looked like he was a Cadillac to drive and he is," said Miller after the race. "I just kind of waited for the dust to settle and moved him to the front and he was very good.

The Muscles Yankee-Creamy Mimi colt is owned by breeders Libfeld and Katz, along with partners John And Jim Fielding of Scarborough, Ont. and Takter's wife Christina. The victory was his second in a row and fourth in six career starts, bumping his bankroll over the $100,000 mark.

Takter and Miller also teamed to win the final $105,344 Simcoe division with the Brittany Farms homebred Lifetime Pursuit ($2.10), who streaked to her fourth consecutive stakes victory.

Sweetie Hearts and Randy Waples established the early lead with 1-9 favourite Lifetime Pursuit and Miller parked from post six and following the advancing Cantabs Fortune and Zeron after they had took a brief tuck into third. Cantabs Fortune cleared down the backstretch, before Lifetime Pursuit swept by at the half, which was clocked in :56-seconds. The new leader began to draw off by three lengths en route to three-quarters in 1:24.4 and cruised home for the 1:53.4 victory. Sweetie Hearts came in second with Chivaree Hanover and McNair following in third.

The Cantab Hall-Queen Of Grace filly, whose current streak started in the Hambletonian Oaks, has won six of her 11 starts this year for earnings of $490,563 (and $760,933 lifetime).

“We bought a daughter of Me Maggie back about 20 years ago and her name was Prime Mistress and she won about $20,000 on the racetrack and had a record of about :58,” said Myron Bell. “Her daughter is the dam of this filly and three generations later it’s paid off.

"This one has much more talent than the other two so we're just happy to have her."

During Friday's undercard, American In Paris ($6.90) overcame an outside post eight start and went wire-to-wire to win her second straight $30,000 Fillies & Mares Preferred Pace in 1:50.1 with Christoforou aboard. Murray Brethour trains the American Ideal-Sendingforth mare for owner Douglas Millard of Woodstock, Ont. Ferrari Sena and Filion were the runner-ups while My Secret Belle and Joe Hudon Jr. rounded out the top three finishers.

The Racing Under Saddle Ontario season continued with a $5,000 non-wagering race on Friday in which Radical Dreamer with Marit Valstad and Tragically Shipp with Natalie Elliot hit the wire together in a dead-heat for the win. Radical Dreamer is owned by Millard and trainer Ronald O'Neill of Cambridge, Ont. while Tragically Shipp is trained by Lee Watson and owned by Lynne and David Magee of Wingham, Ont.