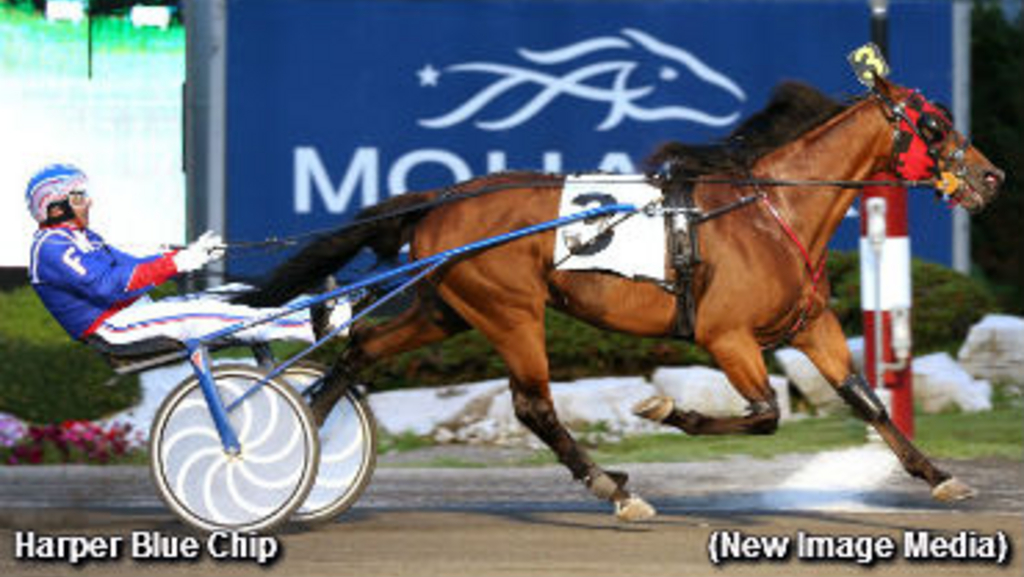 A return to one of his old stomping grounds – Rideau Carleton Raceway – proved to be a wise road trip for two-time O’Brien Award-winning reinsman, Sylvain Filion.

Mr Lover rallied to a 2:00.1 triumph in the first division for Team Filion. Trained by Yves and driven by Sylvain, the son of Deweycheatumnhowe-Norway No Day watched Verdi toss out first-half fractions of :29.3 and 1:02.2 over a track listed ‘sloppy’ with a two-second allowance. Race favourite Entranced pressed the leader on the way to the half, with Mr Lover hot on heels for Filion. Entranced eventually worked his way to the lead, and he rolled by the three-quarter pole in 1:31.1 before rolling off stride in the lane. Mr Lover sprinted home in :28.4 to win by 1-3/4 lengths over Lucky Mass, with Verdi finishing third.

Ecuries R L Belanger of Laval, Quebec bred and owns the three-time winner, who found his way to victory lane for the first time this year. The $35,000 payday bumped his bankroll to $78,600.

Harper Blue Chip gave Filion the stakes double thanks to a facile triumph in the second Gold Series division. The O’Brien Award-wining son of Majestic Son-Winning Jonlin took over command past the quarter pole and cruised to an easy win by 4-1/4 lengths over Muscle Matters in 1:56.1. Sheer Flex took home the show dough.

Mark Steacy trains the colt, who was sent off as the 1-5 favourite, for Landmark 6 Racing Stable, David McDonald, David Reid and George Judson. After going 4-for-8 as a rookie, Harper Blue Chip has followed with a 4-for-9 start to his sophomore campaign. His victory bumped his lifetime earnings to $530,313.

Henry Stable of Arthur shares ownership on the gelding with Fred Brayford of Alliston, Ontario. The partners watched the trotter improve this year’s record to 5-for-9 with the win. His share of the loot boosted his bankroll to $118,490.

Tyrone Haji struck first with a 1:59.3 tally in his $18,000 assignment. Trevor Henry guided the Bob McIntosh pupil to the victory over Massacaia and American Superman.

The homebred son of Kadabra-Showee races for Robert McIntosh Stables Inc of Windsor and David Boyle of Bowmanville, Ontario. It was his third win of the season – and the fourth lifetime tally – for the career winner of $84,294.

Justcallmeronald broke out of a major slump with a 1:57.2 triumph in the second division for the tandem of driver Jody Jamieson and trainer Tony O’Sullivan. The son of Muscle Mass-Lukes Ronda rallied from just off the lead and halted the teletimer in 1:57.2. Race favourite Totally Ripped was a lapped-on second, while Windsun Cobra rounded out the top three finishers.

Pat Ryan of London, Ontario owns the gelding, who is 2-for-13 this season after going 1-for-7 in his rookie year. The trotter has stashed away in excess of $36,000 to date.

Massive Pockets won as he pleased in the final division for the duo of driver Jody Jamieson and trainer Chantal Mitchell. The son of Muscle Mass-Striking Pockets clicked as the 2-1 choice in the $18,000 affair. He defeated Stonebridge Rich and Kremlin.

The homebred, who races for M T Pockets Stables of Pompano Beach, Florida, has put together a 2-4-2 record from just 11 starts this season. He’s banked close to $40,000 this year, while his lifetime earnings climbed to $61,650 with the win.