Stars Out In Full Force At Pocono 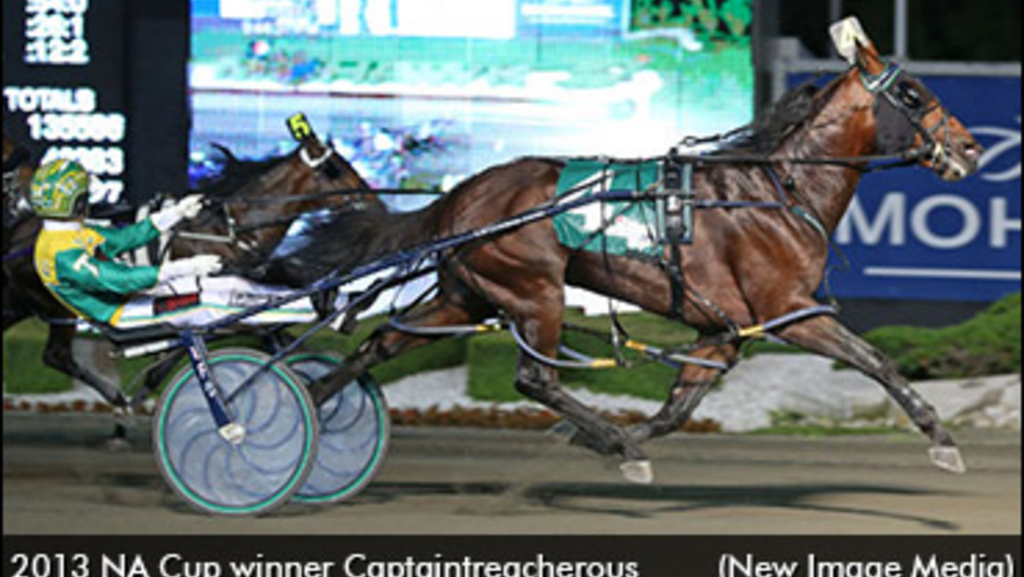 On a dynamic, star-studded Saturday night of eliminations for the $2-million Sun Stakes Saturday Finals at Mohegan Sun at Pocono Downs a week hence, they saved the best for last.

Foiled Again, the nine-year-old evergreen gelding, boosted his lifetime bankroll to $4,924,540 by winning the third of three eliminations for next week’s $500,000 Ben Franklin Pace Final in 1:48 – a world record for older pacing geldings on a five-eighths oval, lowering by a tick the mark first established by Bettor Sweet and then equaled three weeks ago at Pocono by Camaes Fella.

This was the 69th for Foiled Again – and might have been the first where he used the passing lane to post the victory. Let go at 4-1, Foiled Again let Bolt The Duer bolt off the gate to early command, then made a shake-and-bake move to take command approaching the :26.1 quarter. Favoured Pet Rock was moved early and took the lead in front of the stands, with Modern Legend up uncovered at the :54.3 half.

Down the back Pet Rock and Modern Legend dueled to the three-quarter pole in 1:21.2 - a battle they continued around the turn and into the stretch, where surprisingly it was the favourite who gave way first (though not much). But Yannick Gingras, a four-time winner on the night, had pointed Foiled Again to the "Pocono Pike" passing lane, and the Pike came through (it did an astounding eight times on the 14-race card) and so did the old man, with a new mark in his 180th lifetime start and the new world standard for his division. Modern Legend and Pet Rock also advanced from this field to the Franklin Final.

One race earlier, Razzle Dazzle scored his first victory since the Levy Final in 1:49, also via the Pocono Pike. Somehow dismissed at 10-1, the Real Desire gelding and driver Brian Sears helped create their own luck early, shutting the pocket behind hard-leaving Up The Credit, which left outside leaver Sweet Lou no hole, after which he soon broke. After splits of :26 and :55, Fred And Ginger took the raw route to challenge by the three-quarter marker in 1:22.1, and five of the field of six were in contention as they turned for home.

Into the lane, it was Hoosier invader Our Lucky Chip, the longest shot on the board, who swept wide off of cover and into a brief lead - but there were literally only three places from which to win at Pocono Saturday: the pocket (nine times), the lead (four times), and first-over (once), and Razzle Dazzle built quick momentum and scooted up the inside to get the nod for trainer Mark Silva and owner Ira Kristel. Our Lucky Chip and Up The Credit also advanced to the Franklin final.

The first Franklin elim also saw a pocket rocket the most photogenic, as the four-year-old Bettors Delight gelding, Dynamic Youth, wound it up fast late to trip the timer in 1:48.3, equaling the track record for age/sex/gait under the guidance of Andrew McCarthy while also posting the best time of the year for his division. Dynamic Youth made Betterthancheddar pay a :25.3 price for quarter command, but Betterthancheddar got a breather to a :54.4 half. He then dueled with Bettors Edge to the three-quarter pole in 1:21.4. Clear Vision loomed boldly off cover, but Dynamic Youth was the most dynamic late, with Clear Vision and Betterthancheddar getting advancement to next week’s race behind the Aaron Lambert-trained winner who is owned by J And T Silva Stables LLC, Ken Tucci, and C And G Racing Stable.

Here are recaps of the remaining eliminations from the stakes-filled program:

Just when they begin to worry about The Captain, he digs in deep and achieves the victory.

For the third straight week Captaintreacherous gave his backers some anxious moments, but his :53-second back half after a leisurely :55.4 front half was enough for the 1:48.4 front-end triumph. Vegas Vacation, so highly-regarded going into the Pepsi North America Cup - and a little disappointing to some when finishing out of the money - showed that the hype about him was for real. He didn’t pull from third until the five-eighths pole, but still he gained into the supersonic last four furlongs to the point that Captaintreacherous’ margin of victory was only a neck. Rockin Amadeus was next in line at the wire as Captaintreacherous remained unbeaten after four starts in his 2013 campaign.

The Somebeachsomewhere colt is trained by Tony Alagna for Captaintreacherous Racing. The win capped off a driving triple for Tim Tetrick.

The first of the trio of Hempt eliminations saw something no one could recall – a :25.4 third quarter on the board – as Johny Rock dueled viciously with Word Power after a :55.2 half to a 1:21.1 three-quarters. Lurking in the pocket was the Rocknroll Hanover colt Emeritus Maximus, and he gave his maximus down the Pike to reduce his mark in 1:48.4 for driver Doug McNair and owners Cheap Speed Stable, Alan Alber, Steven Wienick and John Fodera while preceding Captaintreacherous as a Tony Alagna-trained Hempt winner. Johny Rock had enough for second and Word Power enough for third to advance on a week; Lonewolf Currier, who would have been the popular choice if anybody was to pace a sub-26 quarter, proved empty off of cover.

Also no factor from the “one and one” spot was Wake Up Peter – but the horse in front of him in the outside tier, Sunfire Blue Chip, was giant in taking the fastest elim in 1:48.3 over Evenin Of Treasure and Martini Hanover. The only winner on the entire Pocono card who was not the pacesetter or pocket horse, the son of American Ideal is owned by Christina Takter, John And Jim Fielding, Brixton Medical AB and R A W Equine Inc. The colt gave conditioner Jimmy Takter a pacing victory to add to his two trotting triumphs.

This division – the Hambletonian division – had its clarity fuzzied instead of sharpened, as early Hambo chalk Smilin Eli won, but the small but mighty Dontyouforgetit clocked in the fastest.

Dontyouforgetit was in the first elimination and he was impressive to gain from the pocket into a :55.3 last half to report home first in 1:52.1, a national season’s best and a clocking that lowered his mark by two seconds. Possessed Fashion, who was able to delay his first-over bid until after the five-eighths pole, came up big for second, while pacesetter Celebrity Maserati did well in holding for third. Jimmy Takter trains the son of Cantab Hall for Solveigs Racing Partners. Yannick Gingras mapped out the winning trip for the youngster.

Smilin Eli had to go :26.3 to obtain the early lead from the outside post eight in his elim, but he was equal to the task while remaining undefeated after four starts, halting the timer in 1:52.3. The 3-5 Muscles Yankee colt fended off railsitters Fico (75-1) and Picture This (65-1) for Tim Tetrick, trainer Deshawn Minor and owner Nicholas Cimino. Jurgen Hanover, who was 7-for-7 in 2013 before the race, had the second-over trip and finished fifth.

Trainer Takter had another Beal elim winner in Corky, never off the board in 13 lifetime starts and never behind at any pole in a 1:52.3 victory, with David Miller in the sulky for owners Christina Takter and John and Jim Fielding. Giving Muscles Yankee a double siring credit for the Beal, Corky defeated Royalty For Life, who made a break, dropped back to last, and was coming fastest of all late to save a miracle second, with Crystal Phenom third.

I Luv The Nitelife, fresh off her Fan Hanover Stakes win, snapped into high gear like a veteran campaigner when shown racetrack up the prized Pocono Pike to take her Lynch elimination in 1:50.1. Nikki Beach, Charisma Hanover, Somwherovrarainbow (pacesetter in only her second race in 37 days) and Mattie Terror Girl (faster fifth-place finisher) all advanced to the Lynch final behind the victorious Rocknroll Hanover filly driven by Tim Tetrick and trained by Chris Ryder for Richard and Joanne Young.

Ms Caila J Fra won the other elimination in a national season’s record 1:49.3 in the card’s opener for driver Simon Allard and trainer Steve Elliott, while was also giving the recovering The Fra Stable LLC a boost in sprits. After what you have read before, it will be no surprise to learn that the winning daughter of Western Ideal parlayed a pocket trip to victory – but she was the only winning two-hole tripper to move outside for the stretch drive, wearing down Shebestingin late, with Jerseylicious and Authorize also authorized to advance to the Lynch finale.

Aracache Hanover front-stepped to a 1:48.3 triumph for Team McNair in the $25,000 Preferred Pace, and he did so in dominant fashion.

Doug McNair pointed the six-year-old son of Dragon Again-Armbro Cachet to the motor and the Gregg McNair pupil steamrolled through fractions of :25.4, :53.3 and 1:21.2 before pulling away to an easy score over Mystic Desire and Urgent Action.

William Switala and Jim Martin of Clarence Center, NY share ownership on the 24-time winner who is now 2-for-7 this season. With his share of the Preferred loot, Aracache Hanover upped his bank account to $1,514,445.