Harold Zahn was a WWII paratrooper in the 82nd Airborne. Like many others, he returned from the war to pursue the American Dream.

With his wife, Marian, Harold moved from Chicago to the then-wide-open spaces known as the suburbs and bought a home in Park Forest, Illinois where they’d go on to raise two sons and two daughters.

Harold was a die-hard patriot and soon became an active member of Chapter 252 of the Military Order of The Purple Heart. After many ‘club meetings,’ he and fellow Purple Heart recipients would find themselves at the historic Washington Park Racetrack in Homewood, Illinois where harness racing took place. Often in tow with Harold was his oldest son, Dale. In the late '60s, the former Lincoln Fields Racetrack now known as Balmoral Park re-opened in far south suburban Crete and the father and son were there when the lights first went on. It was something they would do countless times over the years: go to the races together. 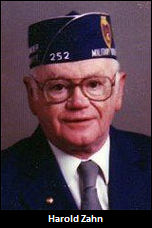 During his final years and in ill health, Harold could be found at the track on virtually all live racing nights and during the simulcasting programs on days the races were not taking place ‘live.’ On a Sunday afternoon in early February, 2002, Dale and his wife LaVonne were visiting from Holland, Michigan and stopped by Balmoral where they found Harold in his usual spot in the second floor clubhouse along with his hot coffee, racing programs and his three-pronged walker that helped him get around. One week later, Harold was gone and Marian was hospitalized after taking a fall and injuring her hip. When he died, he still had a live betting voucher in his shirt pocket --- that’s just the kind of fan he was.

Although, Harold was more than just an avid race fan. He was a strong father that instilled a spirit of patriotism in his kids, and he was a loving and dedicated husband and grandfather. The tales that could be told about Harold would fill volumes. A staunchly proud American, Harold was a true believer in the 'Red, White and Blue' that in all types of weather made certain an American Flag was flying on a pole in the front lawn of the family home. If there was a parade, he was there, if there were services on Veterans Day, or Memorial Day, he was there, and so was his family.

The races, in addition to a passion for golf was what he thoroughly enjoyed so after he left this world and was laid to rest in Monee, Illinois, some 15 minutes from Balmoral Park, Dale and LaVonne conjured up the idea of a Memorial Race at the track he spent so much time at, a event for a small group of family members and friends to get together and share memories of Harold. Symbolically, they honed in on the first Saturday in April since Harold was born on April 2. All knew that Harold would have loved this event. Dale and LaVonne ordered a purple and white blanket to present to the winning horse and driver in the winner’s circle and were presented with a drivers whip autographed by many of the drivers Harold and watched and wagered on over the years. That whip is displayed on the wall of Dale’s office to this day.

No one could have known how, over the years, the event would evolve and mature, and evolve it has! Its been re-named the Harold Zahn Purple Heart Memorial Race to bring honour and recognition to all purple heart recipients, something the family felt Harold would be proud of. The family keeps Harold’s memory alive and looks to say thank-you to all the purple heart recipients. Members of Chapter 252 have been in attendance and acted as a colour guard for the singing of the national anthem live from the winner's circle.

This year, as she’s done twice in the past, Harold’s first granddaughter, Mandy, will perform the anthem live. Mandy is founder and lead singer of the award-winning group 'MandyZ and Rural Route One.' The full group will perform at Balmoral later this year in July, during the Festival of Racing week. In addition, Dale will again take to the microphone, welcome the guests and explain briefly about the event then announce the post parade as horses and drivers come onto the track. Over the years guests and dignitaries have come from six states. Harold’s two great-granddaughters will be at the races, as their own dad, Harold’s first grandson, Jim and his wife Jenny bring them to share in the remembrance of their great-grandpa they never met.

This year, for the 12th consecutive year, the Harold Zahn Purple Heart Memorial Race will take place on Saturday, April 6. The colour guard and national anthem ceremony will take place shortly after 6:30 p.m. Live racing will start at 7:10 p.m. Some 40-50 guests including family and friends will be in attendance.