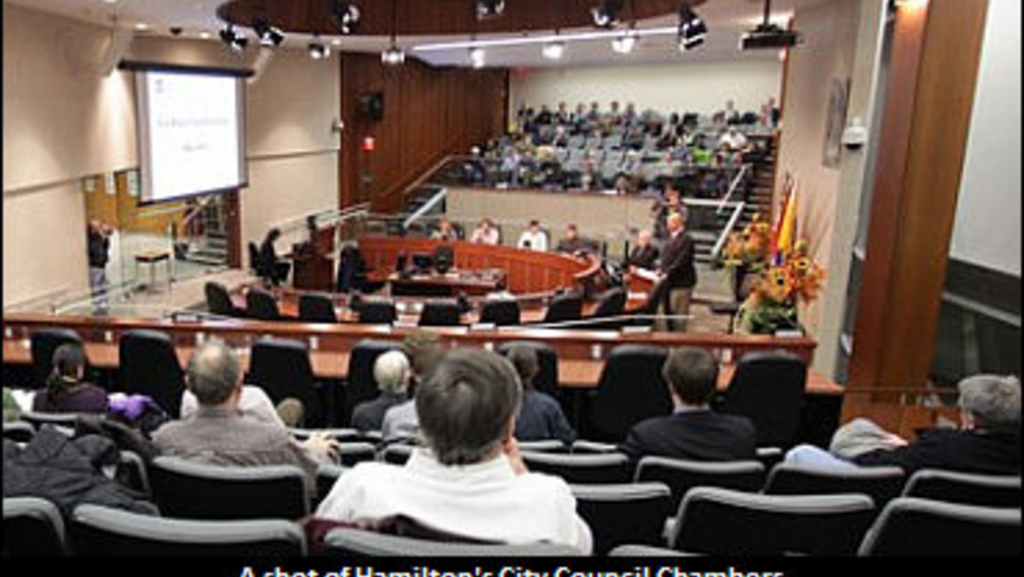 On Thursday, February 14, Hamilton City Council voted unanimously that any new casino development should go to the Flamboro Downs location. But there's a catch.

After more than five hours of lively discussion and debate, council chose the Flamboro location for a possible casino development with a secondary approval to consider a downtown Hamilton location only if the racetrack site isn’t viable.

In a session that began during the early afternoon hours, Council sank its figurative teeth into the lightning-rod topic of casino expansion in the city.

Councillors in support of a downtown-Hamilton-casino referendum question threw up their arms just before 5:00 p.m. Various Councillors were very upset after it took some straight-forward, no-nonsense questioning with persistence to reveal that if the City of Hamilton deems itself a willing host municipality for casino expansion, the city actually has until the first quarter of 2015 to employ its veto option over the process, if it pleases to do so. The only pressing deadline for Hamilton at this point is whether or not the city wants to declare itself a willing host municipality for casino expansion under the OLG modernization plan --- the deadline for that decision is at the end of March, 2013.

Given the fact that Hamilton can declare itself a willing host at any point before March, and that it has until early 2015 to go all-in or opt out of OLG's potential Hamilton casino plans, the City of Hamilton does have the ability to take the downtown-casino-expansion question to the public via a 2014 referendum question.

After it was finally revealed that Hamilton's drop-dead casino decision is actually early in 2015, and that the game-changing revelation had to be pulled from city officials after some point-blank questioning, one Councillor blurted, "Why are we just finding out about this now? After some questioning from Councillors?"

Some Councillors tried to downplay the significance of the 2015 news, stating that the real issue at hand is the topic of willing-host-community status for the city. The Councillors stated that the timelines haven't been an issue and that the process has been presented in a straight-forward manner all along. To retort the claim, Councillor Merulla stated, "If you think the process has been transparent, it has been anything but." At that point, Merulla reminded Council of every single roadblock he and Council has faced from the OLG in regard to the long, drawn out Hamilton gaming expansion ordeal.

"This (the 2015 date of Hamilton's final decision on a casino) is news to us," Merulla said. "We can have a referendum. Why was a gun put to my head (figuratively) saying that we can't have a referendum?"

In further regard the OLG modernization and the wildly-varying truths to the whole process, Merulla told Council quite frankly, "I don't know what to believe anymore," adding "instead of Valentine's Day, it feels like April Fool's Day."

Before the 2015 bombshell was dropped on Council, Hamilton City Manager Chris Murray revealed to Council that he does not have it in writing that the City of Hamilton even has veto power over the process at this point, and that the veto-power information was told to him during a discussion with the OLG that was not on the record.

Council broached the topic of the Ontario Liberal Government possibly lifting or amending provincial zoning rules to allow the expansion of a casino/entertainment complex at Flamboro (i.e. restrictions under Greenbelt legislation). Councillors pointed out the fact that in the late 1990s the provincial government was more than willing to allow in excess of a dozen racetracks clearance to expand from bring traditional raceways to 'racinos' in order to house slot-machine gaming for the province.

It was at that point when Hamilton Bob Bratina stated that he had spoken with now-ex-Ontario Agricultural Minister Ted McMeekin and two other Ontario ministers in the past three weeks in regard to whether the Provincial Government would be willing to ease Greenbelt restrictions in order for a casino/resort. Mayor Bratina explained to Council that he was told by the Ministers that any official push or application to see the provincial zoning restrictions lifted for expansion would be seen or treated as a 'non-starter.'

Later in the session, Hamilton City Manager Chris Murray stated that the racino operation at Flamboro Downs annually generates roughly $4 million in revenue for the city, while Niagara, which is home to not one but two full-blown casino complexes, only brings roughly $3 million to Niagara.

OLG numbers presented during the Council session indicated that if live racing at Flamboro Downs ceases, the stoppage will affect 176 direct employees at the track itself, 250 race-day jobs and 3,600 indirect jobs.

Fifteen minutes before the session was scheduled to get underway, Councillor Jason Farr made it aware to all that Global Spectrum and Live Nation are not at all pleased with the possibility of a full-blown casino and entertainment complex being built in Hamilton's downtown area.

At one point, during questioning by pro-Flamboro Councillor Judi Partridge, it was stated by the OLG that if a mega-casino complex ends up being erected in Mississauga --- although no such indications have yet to be reported in the media --- there is a 'very good chance' Woodbine Racetrack could lose the slot-machines which are currently located at the suburban Toronto raceway.

In a report by the CBC, Councillor Farr said that Global Spectrum and Live Nation were not made aware of the possibility of casino expansion coming to the downtown core when the began negotiations to take over operating control of two thirds of the city's Hamilton Entertainment and Convention Facilities Inc. (HECFI).

In light of the announcement by Global Spectrum/Live Nation, which is on the cusp of taking over control of HECFI, Councillor Farr said, “This point just further gives reason toward that kind of support for Flamborough as a location (for potential Hamilton casino expansion).”

Baby steps everyone, this is

Baby steps everyone, this is a loss for the OLG they were not able to push this council around, good points of truth were exposed like Flamboro generating 4 million for the host community while 2 OLG run casinos in Niagra only generate 3 million -WHY???. Transparentcy is not what OLG wants out to the public, would other councils around Ontario have signed on to their contracts without the Veto available to Hamilton that is now in writing - we owe Hamilton Councilors a big Thank you, yes there was nothing in the decision about funding arrangements for the horse industry but that is a different fight one we need to get started on and that might end up in a legal action against the OLG.

Just back from this meeting,

Just back from this meeting, while the councillors want Flamboro as a host there was no mention of revenue sharing for the horsemen. It was also mentioned that flamboro has the same race dates in 2013 as 2012 which is the first I have heard of it, probably more propaganda by OLG