The effects of the OLG and Ontario government's decision to end the slots-at-racetracks partnership with Ontario's horse racing industry has forced Canada's biggest track operator, Woodbine Entertainment Group, to convert its standardbred backstretch at Mohawk Racetrack into a training centre this winter. 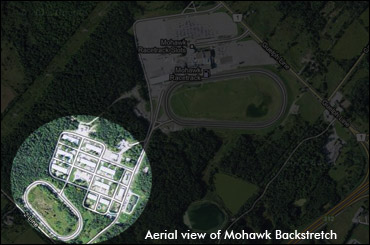 Trainer Bob Young is a director of the Central Ontario Standardbred Association and part of a COSA stabling committee with President Bill O'Donnell and Joanne Coville. Young told Trot Insider on Friday that the meetings have gone very well with WEG management thus far. According to Young, WEG's decision to convert the backstretch to a training centre is strictly based on the uncertainty of racing in 2013.

"[WEG's Executive Vice-President of Racing] Jamie Martin said if the program was still in place as of April 1, the split-sharing the way it has been, it would come off the table. There would be no stall rent here," said Young. "But as of now we don't know what it's going to be as of April 1 so there could be a chance that there would be stabling here with no stall rent, if the percentages stay the same."

One of the many longtime trainers stabled in the Mohawk Backstretch, Young understands the rationale for the move.

"We've always been charged $1 per day for environmental fees for the removal of shavings and straw here but I think with the uncertainty of what's going in with the government, it costs quite a bit of money to keep this place going and they said, 'hey, if we can charge a stall rent that's not too much on the people we'd like to recoup some of that money also'."

The training centre will be open for public stabling this winter, from November 1 to May 1. Stall applications will be coming out sometime in August with trainers notified by early October.

"It's going to be $250/month for the winter and $125 for the summer," noted Young. "The paddock will be closed for the winter and there will be no ship-ins. If you want to ship in to train your horse, you can go to Woodbine. As of right now, qualifers will be on Thursday afternoons at Woodbine at 5:00 p.m. Also, if you're racing that night you'll be able to put your qualifier in one of the 32 retention stalls. Plus, they're hoping that the old retention stalls will be available if they have that many horses staying but they figure 32 should be lots [for that time of year]."

Right now around 320 horses are stabled at Mohawk, with projections of more than 400 horses for the winter months. Young also confirmed that the dorms will still be in place as will security in the backstretch, but in all likelihood there would not be security at the stable gate.

"The price isn't going to affect anybody and everybody's quite happy that they're still staying here," continued Young. "It's a great facility; everybody knows that, we've been here a lot of years and I don't think you'll see anybody move out because of the stall rent, that's for sure."

Of course horsemen aren't concerned with $250 month. They simply pass the expense to their owners.

Please explain to me how 5 pm qualifiers by the airport during rush hour is a good thing.