"He’s Come Back Great For Us"

The Ladies Man appears to hit his best stride when participating in the Beat The Heat Pacing Series at Mohawk Racetrack. 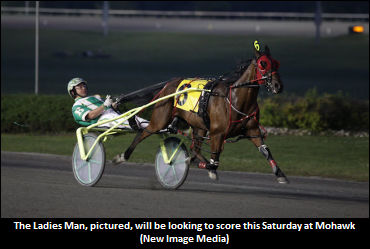 Last year, in its inaugural edition of the event, the gelding captured a preliminary leg of the series before finishing second in the $60,000 final.

This season, the six-year-old son of Modern Art has picked up right where he left off, capturing his opening round division of the series this past Saturday at the Campbellville oval.

Trainer Jim Ritchie, who resides in Grand Valley, has been the gelding’s conditioner since his purchase as a yearling in 2007.

“He’s been a really terrific horse for us,” Ritchie said. “He’s not a very big horse, but we can really count on him every year. He was on the smaller side when we bought him as a yearling, but he was built right. That’s why we took a chance on him.”

Ritchie is also pleased with the way The Ladies Man has progressed over the years.

“He made the Grassroots Semi Final as a two-year-old, so right off the bat we knew he had a decent horse on our hands," Richie said. "Then he has gotten better every year and this year is no different.”

The Ladies Man has one adoring quality for Ritchie, who also co-owns with his brother, Paul, and Murray Cox. Their pupil doesn’t mind getting his picture taken.

From 80 career starts, the brown pacer has boasted an impressive 19 victories to his credit, with $258,975 in purse earnings.

Although The Ladies Man has had a successful career on the track, he did face some misfortune last season. After the Beat The Heat Pacing Series, The Ladies Man faced some lameness issues, which required Ritchie to give his talented student some time away from the track.

“After the series, he became lame in his one ankle, so I gave him the entire winter off,” Ritchie said. “It was the right move because he’s come back great for us. It was clearly the right thing to do.”

The proof is in the pudding, as The Ladies Man has recorded three wins in eight starts since his return to the track this season.

“That would be nice,” Ritchie laughed. “There are some good horses in the series and it’s a very competitive bunch. All we can do is hope for some racing luck.”

Aaron Byron, who was the pilot behind The Ladies Man when he took his lifetime best clocking of 1:50.2 last year, will guide the gelding in Race 6 on Saturday evening. First-race post time is scheduled for 7:10 p.m.