Hambletonian winner. Stable star. Iron Horse. For Roger Hammer and Todd Schadel, both accomplished horsemen on the Pennsylvania circuit, a horse named Vivid Photo truly was “the good one” -- the horse that means you have made it in the sport of harness racing. 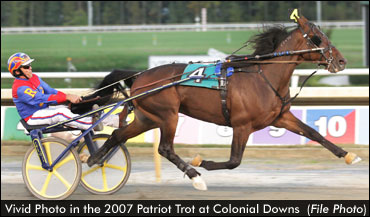 The son of S Js Photo and the Garland Lobell mare Miss Garland was a $30,000 purchase in the fall of 2003, and kicked off his two-year-old season with six starts and wins in the Pennsylvania Sire Stakes. The decision to geld the colt was a good one, with Hammer saying, “Otherwise, he would have been a $3,000 claimer.” The fiery colt often tried to climb the walls of his stall.

As a three-year-old, Vivid Photo recorded eight victories in 10 starts. In the Hambletonian eliminations he won in 1:53.2, by a neck. Then came the Hambletonian, and the rest, as they say, is history. He swept wide in the stretch and exploded past his foes to the capture the brightest jewel of trotting’s Triple Crown in 1:52.3.

Vivid Photo was honoured on Saturday night at Mohegan Sun at Pocono Downs with a special retirement ceremony. After the fifth race, track announcer Jim Beviglia narrated as Todd Schadel and Roger Hammer led their prized gelding down the stretch and into the winner’s circle for the last time, complete with his Hambletonian saddle pad.

There he was met with applause, a plaque and numerous bouquets of carrots by his connections and representatives of Pocono, including race secretary Rick Kane, marketing manager Jennifer Starr and Pennsylvania Harness Horsemen’s Association president Sam Beegle.

(With files from Pocono Downs)