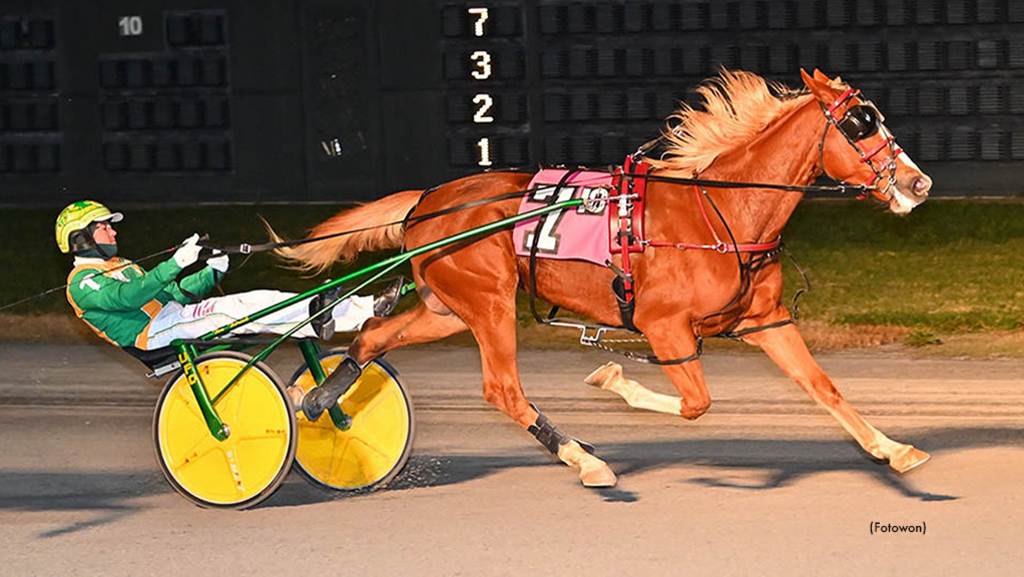 With Carls Legacy and Hespookshescores both off stride at the start, Perfect Twenty and driver Tim Tetrick had a fairly easy time clearing for the lead from post seven. The Yankee Royalty-Jetta Spring gelding strode clear of two other leavers — Kodack Black (driven by Montrell Teague) and Reddy Fox (Art Stafford Jr.) — to control a :28.2 first quarter. With just over a lap to go, Kodack Black revved up from the pocket to engage Perfect Twenty but broke stride at the bell, enabling Reddy Fox to inherit the pocket and Perfect Twenty to steal matching :29.4 middle splits.

Up the backstretch, Perfect Twenty opened a nearly three-length lead before Kodack Black worked back into second and angled off the pegs again for the stretch drive. Perfect Twenty dug in to win by a length over Kodack Black, who was disqualified and demoted to fourth after having gained ground while off stride on the first circuit. Reddy Fox, who finished third beaten 11 lengths, was elevated to second; I Got It Made (Michael Cole) was elevated to third.

Vincent and Cavanagh also captured the $20,000 combined consolation with Royal Mistake, a Yankee Royalty-Tug River Woman gelding who angled out of the pocket approaching the far turn, took the lead from faltering pacesetter Youngbuck, and staved off a late bid from 3-5 favourite Starlight Lounge to win by a head in 2:00.1.

Out of the gate, Yannick Gingras and Hl Revadon revved up the engines and sprinted quickly to the lead while Mississippi Storm (Victor Kirby) settled into the pocket position. Favoured Stormy Kromer (Tim Tetrick), out of post seven, hustled to the third position off the leader. Hl Revadon buzzed the opening quarter in :26.3, maintaining a two-length margin to the half in :56, and widening that lead to 2-1/2 lengths past three quarters in 1:23.4. Stormy Kromer made a move first-over off the rail, but could not gain on leading Hl Revadon, who drew away to win by six lengths. Mississippi Storm finished second and Jl Cruze (Art Stafford, Jr.) rounded out the triactor.

On Wednesday night (Nov. 23), the $250,000 Progress Pace is up for grabs in the 12th race featuring Pebble Beach, I Did It Myway, and Beach Glass. The last of the four DSBF finals for freshmen, the $100,000 Ramona Hubbard Memorial, for two-year-old pacing fillies, is also slated for Wednesday's card. Bally's Dover will be dark on Thursday (Nov. 24) for Thanksgiving. Racing resumes on Monday (Nov. 28). Scheduled post time is 4:30 p.m for all cards.