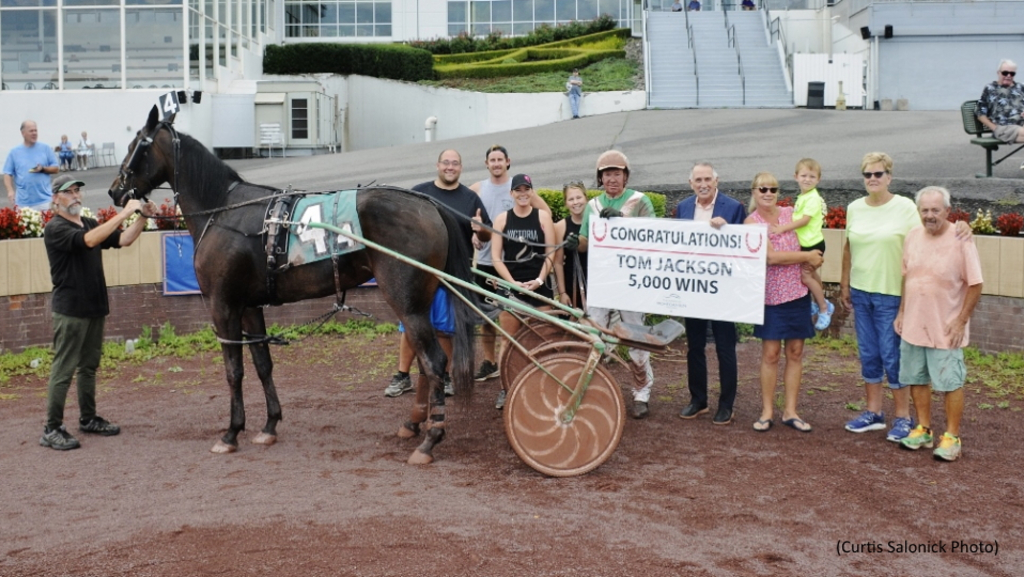 Tom Jackson recorded the 5,000th victory of his driving career when he brought home the Trixton–Angel Eyes Hanover freshman Saint Trixie to victory in the fourth race at The Downs at Mohegan Sun Pocono on Tuesday afternoon.

Jackson and trainer Fred Grant have had outstanding success for two-year-old trotting fillies over the last few weeks, and here Saint Trixie was recording her second straight triumph, sitting in the pocket then rallying to a new mark of 1:56.4 over sloppy going for Jackson and Grant.

It’s hard to believe that the youthful-looking , 59, is in his sixth decade of driving, but he began his career in 1979 (when his sulky appearances accounted for purses of $607). He was a leading driver in his native state of before making the move to when the purses grew with the introduction of further gaming, and he has been a mainstay of the local horsemen’s community since, with some wintering in . Jackson’s USTA record also shows him with 488 training wins, although he likely had quite a few more before trainers’ records were started by the USTA in 1991.

Tom followed his father Hubert into the harness business; Hubert, known as the “King of Queen Anne” because of his Maryland birthplace, was one of the top horsemen on the Delmarva peninsula, recording over 1000 wins in the USTA computer although he almost certainly had many more that have gone unrecorded. After winning with a two-year-old in 1:58 in June a few years ago, Tom was asked what he thought Hubert might say about going so fast with a baby, and Tom replied, “He probably would have handed me a pitchfork, pointed me to the barn, and told me not to come out for a month.”

Pocono’s leading driver, Matt Kakaley, also had a “milestone win” of sorts – he drove his first winner since being injured in a racing accident here on July 26, putting a new mark of 1:57 (track updated to “good”) on The American Eagle. (He would later add a second win with another trotter, Say You Do, in 1:55.) Matt had a 177-160 edge in wins over perennial Pocono leader George Napolitano, Jr. as of the start of the Tuesday action. (Scott Zeron, injured more seriously in the accident, was in good spirits on the Hambletonian broadcast this past Saturday, and has a tentative timetable of recovery.)

Racing resumes at Pocono on Saturday with a 1:30 card.  A week from this Saturday, August 20, Pocono will be hosting many of the champions of North American harness racing during Sun Stakes Saturday, a day offering in the neighbourhood of $2 million in purses, with several levels on racing for all of the top three-year-olds, along with a fast-class event for seasoned performers on each gait.