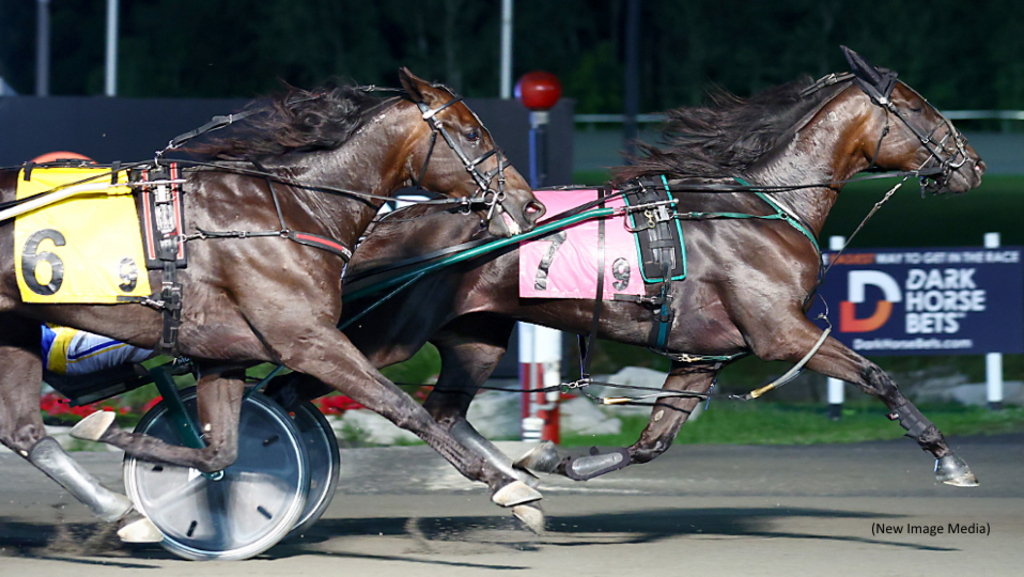 The winning streak is now five-in-a-row and climbing for Fashion Frenzie, who remains unbeaten in 2022 thanks to his Monday evening triumph in the $38,500 Open Handicap for trotters at .

The four-year-old son of Archangel-Striking Fashion went to the front and didn’t look back en route to his fourth win of the year in as many tries for trainer Richard Moreau.

Louis-Philippe Roy hustled the O’Brien Award-winning Fashion Frenzie to the lead from Post 7 and together they led the group through fractions of :27.3, :56.2 and 1:25 before using a closing quarter clocked in :28 to produce the half-length triumph over Forbidden Trade in 1:53.  Patriarch was third.

Sent off as the 1-2 favourite in the seven-horse affair, Fashion Frenzie improved his lifetime record to 15-3-0 from 23 starts with the win.  Ecurie Francis Richard Inc, Mario Bourgea, Pierre Guillemette and Sylvain Richard share ownership on the career winner of $797,685.

Monday’s card also featured the second leg of a pair of Pop Up Series events – one for condition claiming pacers of the female persuasion and another two for their male counterparts.

Wendy Warren-Timpano and Seaspray Stables Ltd share ownership on the five-time winner who went over $25,000 in earnings with the victory.

Big Ace rallied from out of the clouds for driver James MacDonald, who celebrated a five-win performance on the card, to win the other division for male pacers in 1:52.3.

More than 15 lengths off the lead heading into the final quarter, Big Ace fired home in :27.1 to win by a head over heavily favoured Control .  Yarm rallied from last to finish third.

The Witches Brew erupted for a 20-1 upset in the first division for the distaffers.

James MacDonald rallied the five-year-old daughter of Royal Mattjesty-My Sisters A Witch to the 1:55.3 decision over Ashlees Delight and Power Of An Angel.

Victor McMurren trains the mare for owner Marc Adams of .  The two-time winner is closing in on $20,000 in lifetime earnings.

Mighty Melissa was a popular winner for Team McNair in the final division.

Doug McNair rallied the three-year-old daughter of Sportswriter-Regally Ready to the 1:55 triumph over Maddigal and Stonebridge Thalia.

Trainer Gregg McNair co-owned the pacing lass with Ross Family Farms Ltd, Wayne MacRae and Ross Holmes.  It was the second win in 10 career starts for the career winner in excess of $20,000 who was claimed out of the winning effort.