Freshmen Swift In PASS At Pocono 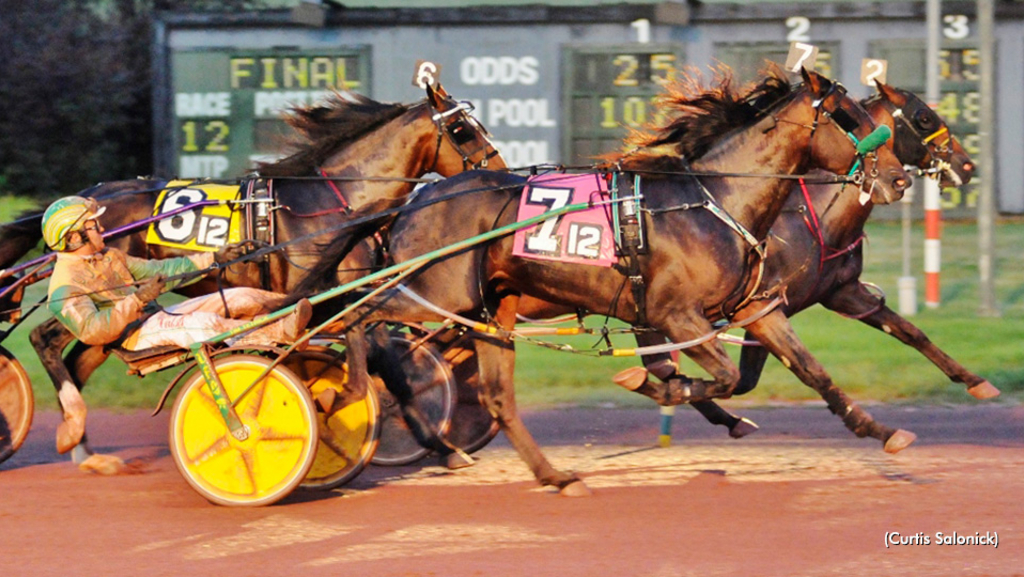 Sire Stay Hungry swept the two third-preliminary round divisions of the $162,620 Pennsylvania Sire Stakes (PASS) for two-year-old pacing colts at The Downs at Mohegan Sun Pocono on Sunday night (Aug. 7), and both divisions were clocked in 1:51.3 over "sloppy" going.

The colt Lyons Surfing capped a big stakes night for driver Tim Tetrick and trainer Jim King Jr. when he was up for a nose victory in one division. Lyons Surfing tucked fifth from post 7 in a field of eight as favoured Bugaboo Lou made the early lead by the :27 quarter, yielding to previous PASS winner Ken Hanover before reclaiming the lead to a :56 half. Lyons Surfing had to come first over — but in pacing a :54.3 individual last half, he had gotten close to the lead by the 1:23.4 three-quarters. He then just kept coming gamely, working to defeat the Pocono Pike-shooting Ken Hanover by the tightest of margins. Bugaboo Lou had an excuse in finishing third, three-quarters of a length back, when returning with broken equipment.

The win was the second straight for Lyons Surfing, after a victory in a division of the Arden Downs on Adios Day. The freshman, whose dam is Surfside Sexy, is owned by Threelyonsracing.

The other division matched Ervin Hanover — the only double winner in the first two PASS legs — against two other previous PASS winners and a double Stallion Series winner, and it was won by the gelding Annapolis Hanover (dam All Night Long), who won his fourth-straight race, a streak that now includes two pari-mutuel PASS legs. Annapolis Hanover was three wide through a hot :26.4 quarter, with Ervin Hanover inside and Fulton between horses, and then followed Fulton on to the lead under David Miller’s guidance before a half in :55.3. The swift early action took some steam out of his two early foes, but Annapolis Hanover stayed on and withstood the first-over bid of Stay Grounded through and past the 1:23.4 three-quarters and prevailed by 1-1/4 lengths.

Annapolis Hanover now has six wins in eight starts, and equaled his mark. He is owned and trained by Mitchell York, a retired PA State Trooper, who in the afternoon won a stakes race at the nearby Honesdale (PA) Fair – but this victory was approximately 29 times more lucrative.

Tetrick won three of the five $20,000 companion Stallion Series races, including guiding another Stay Hungry gelding, Dempsey Hanover (dam Deer Valley Miss), to a 1:55.2 victory to make him the only three-time winner in the Pennsylvania Stakes program winner on either pari-mutuel side. Dempsey Hanover got a soft :58.2 half on the lead, but he still had to fight hard to ward off the pylon-shooting Major Decision by a neck for trainer Todd Luther and Black Magic Racing LLC.

Two other Stallion Series divisions fell to Team Tetrick/King with sons of Captaintreacherous: the gelding Secret Captain (dam Dark Secret), who took his second-straight Stallion Series race in a lifetime-best 1:53.2 for owner Jo Ann Looney-King; and another for the ownership of Threelyonsracing, the colt Lyons Spirit (dam Southwind Serenity), who also became a double Stallion Series winner with a 1:55.1 mile, pacing two :27.2 back quarters uncovered in impressive style.

A third Stallion Series-winning son of Captaintreacherous paced the fastest time of the five sections, as the gelding Quixote (dam Love Canal) paced his own third quarter in :27.2 to charge from fourth to first, then tacked on a :27.4 kicker to lower his mark to 1:52.4 for driver David Miller and trainer Nifty Norman. Norman co-owns the winner with Let It Ride Cooper Stables, Bottom Line Racing LLC, and Howard Taylor. Quixote has now won Stallion Series races in his only two career starts.

The other Stallion Series section was taken by the longest-priced winner of the entire night, 6-1 shot Just Bet It All, a Betting Line-Just Fine gelding, who was yet another first-over winner. He took a maiden mark of 1:54 for driver Mark MacDonald, trainer Linda Toscano, and the ownership of West Wins Stable, Calhoun Racing LTD, Pit Bull Stable LLC, and Mac Nichol.

There will be 1:30 p.m. (EDT) afternoon cards on Monday (Aug. 8) and Tuesday (Aug. 9) at Pocono. Program pages are available at the PHHA website.