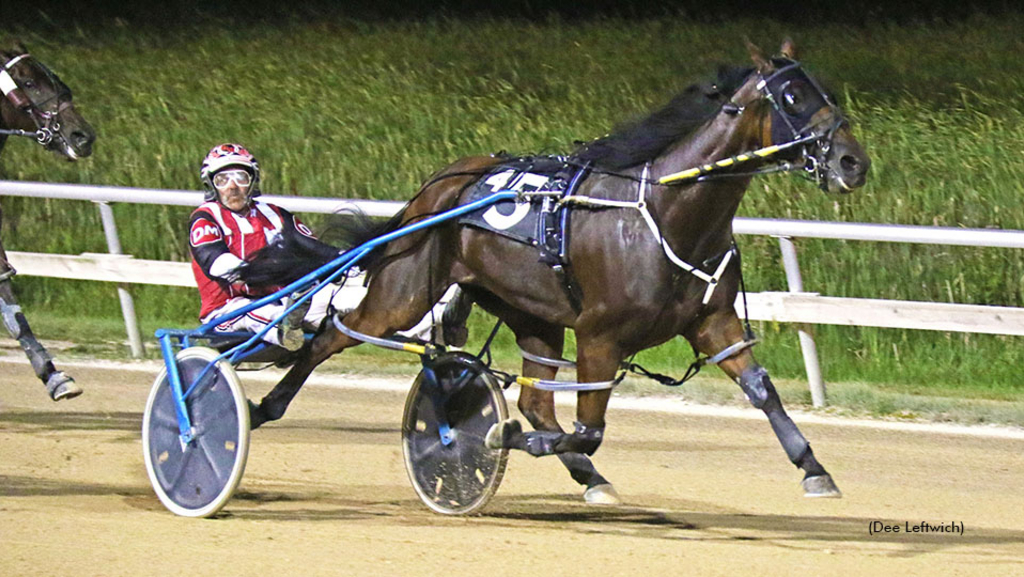 Saddle Up (Dean Magee) was highly regarded in the win pool at just over even-money while Dan Patch FFA winner A Major Omen was also heavily bet at 7-5 on the board.

Saddle Up was the fastest away from the gate from post five to take immediate control while SB Bodacious (Rick Magee) protected his inside draw position to secure the pocket trip and A Major Omen (Tony Kerwood), who left from post six and was looking for the front, was forced to back off and drop in third as Saddle Up posted a :27.4 opening quarter.

A Major Omen was flushed out first-over as they rounded for the half-mile while the leader was able to steal a breather of :29 in the second panel. Its A Marcs World (Luke Plano) picked up the second-over trip and Alilthundadownunda had excess cover as they headed down the backside.

Dean Magee turned up the third quarter speed with Saddle Up (:27.2) and A Major Omen was unable to clear the leader. In the lane, Saddle Up ($4.20) had plenty left to give and was able to withstand a late charge from SB Bodacious to score a one-length tally in 1:51.3 with A Major Omen holding for third money.

The winner is a four-year-old son of JK Endofanera and is owned by Jeff Fought Racing and trained by Justin Anfinson. He now has six wins in 16 starts this year, with seasonal earnings of $68,325.

The Minnesota-sired freshman trot was also featured on the Tuesday program, with a total purse of $33,000. The ‘A’ division was contested for $19,800 and went to Iron Sharpens Iron (Plano, $2.60), who took control just past the quarter-mile and then proceeded to widen his margin at every call, drawing away to post a six-length win and lower the track mark to 1:59.3 for two-year-old male trotters. Whata Tettegouche (Dean Magee) was second best in the record mile and Teeter Trotter (Rick Magee) was home in third.

The winner is a son of Banker Volo who now has five wins in six career starts and has earned $37,350 for owner/breeder Jeralene Roland and trainer Dan Roland.

The $13,200 ‘B’ division went to Al Mar Richs Jetta ($20.20) for her first career win. Owner/driver Brandon Jenson worked out a perfect pocket trip for the daughter of Lear Jetta, following race favourite Homeschool Failure (Rick Magee), who set the fractions. Al Mar Richs Jetta exploded with trot in the lane and drew away to win by three lengths, while SV Lil Martina (Mooney Svendsen) closed for second and Azteca Your Money (Kerwood) rallied late to nab the third spot. The winner is conditioned by Brady Jenson, who had two training wins on the card.

Live racing returns to Running Aces on Wednesday (Aug. 3) for ‘First Responders Night at the Races’ with first post at 7 p.m. (CDT).