The driver nicknamed 'The Maritime Magic Man' and the horseman dubbed 'The King of Island Racing' would not be denied chances to represent their country in the 2023 World Driving Championship in Italy, as Gilles Barrieau and Marc Campbell emerged victorious from the 2022 Atlantic Regional Driving Championship (ARDC) held on Saturday (July 30) at Red Shores Racetrack & Casino at the Charlottetown Driving Park in Charlottetown, P.E.I.

By virtue of his three wins and five top-three finishes, Barrieau (A/K/A 'The Maritime Magic Man') amassed a total of 64 points to win the ARDC and advance to the 2022 National Driving Championship (NDC) at Century Mile in Edmonton, Alta. this coming November. 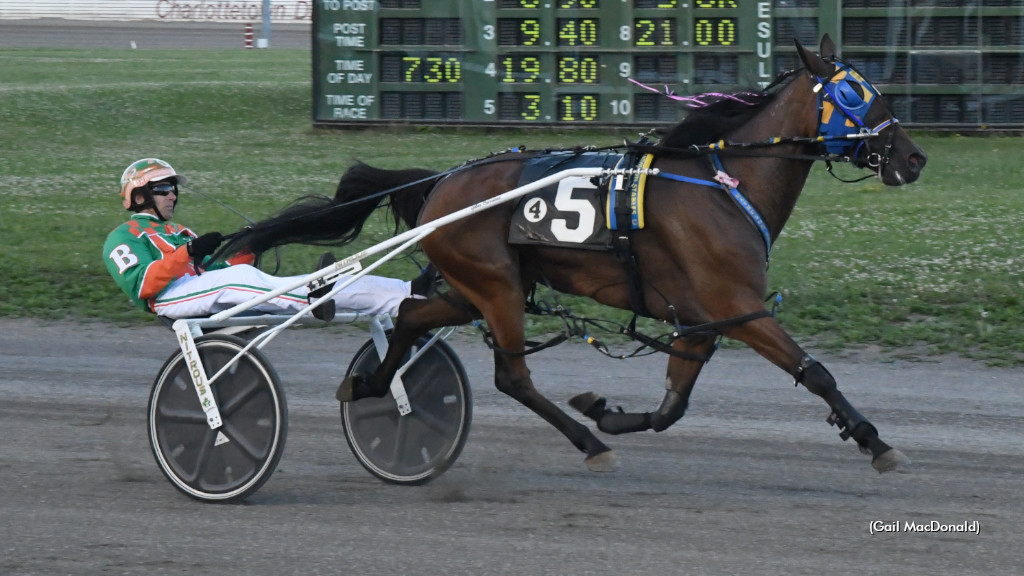 Gilles Barrieau winning with the appropriately-named The Time To Win

The Saint John, N.B. native and current Stratford, P.E.I. resident, Barrieau is no stranger to National Driving Championship success. He won the 2007 NDC, finished third in the 2008 edition and was the NDC runner-up in 2011 to eventual World Driving Champion Jody Jamieson. Barrieau won the most recent edition of the ARDC in 2018 at Truro Raceway.

"Everything worked out good," said Barrieau after the competition. "I thought I had a pretty good shot starting off; some of them didn't show up and a couple of them that I didn't think would show up showed up. It was good racing overall."

Joining Barrieau in representing Atlantic Canada in the 2022 National Driving Championship is 'The King of Island Racing', Marc Campbell, who tallied 63 points through the eight-leg contest to finish second in a very heated competition. Corey MacPherson finished third in the Atlantic Regional, just one point shy of Campbell and two points behind Barrieau with 62 points.

The official leaderboard at the conclusion of the Atlantic Regional Driving Championship is as follows:

Barrieau and Campbell complete the field of drivers that will compete in the 2022 National Driving Championship at Century Mile on November 24. The full field of drivers and region of representation is as follows:

Here are the live updates provided by Trot Insider  from Saturday's ARDC legs.

ARDC Race 1
Psili Ammos ($5.30) was much the best for driver Paul Langille in the first ARDC contest, going gate-to-wire with an open length romp in 1:56.2, lowering her lifetime mark by nearly four seconds in the process. Mark Pezzarello chased in futility in second with Black Elektra, while Todd Trites got You Aint Dolly into the triactor for some solid points in third.

ARDC Race 2
With a trip that was reminiscent of the 2008 Gold Cup & Saucer win of Earl Smith and Pownal Bay Matt, Corey MacPherson came from the back of the pack around the far turn to swoop past the field and win the second ARDC leg with JJ Xavier — a horse that the late Earl Smith developed and trained prior to this race. JJ Xavier ($14.60) got to the wire first and just ahead of pylon-skimming Smart Official (Paul Langille) with Mick Dundee (Gilles Barrieau) in third.

ARDC Race 3
According to driver Gilles Barrieau, the third race of the ARDC was indeed the time to win and he did just that with The Time To Win ($3.10), flushing cover before the half and then making a three-wide sweep to the lead down the backside before drawing away to win handily. Todd Trites got longshot Elm Grove Misty home second with pacesetter Miss Kabana (Mark Pezzarello) hanging on for the show spot.

ARDC Race 4
Marc Campbell had some familiarity with Good Eye Hawkeye ($6.00) but the duo had never tried to cut a mile before. They might consider that strategy next time out as the seven-year-old pacing gelding was an ultra-impressive winner for Campbell in 1:55 — his best win time of the year. J K Express (Todd Trites) edged out Howmacs Dragonator (Langille) for second.

ARDC Race 5
Best To Hurst ($3.70) had to work to get to the lead, but once he cleared past the opening quarter he would not be denied in a 1:55.1 going-away romp to give Campbell his third straight win of the card and second consecutive in the ARDC. Shifting Views was a solid second at long odds for Mark Pezzarello with Tempo Seelster (Gilles Barrieau) in the show spot.

ARDC Race 7
Gilles Barrieau asked Elm Grove Mistress ($7.90) to play a little give-and-go on the front end with Elm Grove Penney (Todd Trites) and there's a reason why he wanted the front: the seven-year-old mare was never better, pacing to a new lifetime mark of 1:54.4 in an open length smackdown of her rivals. Le Vie En Rose (Marc Campbell) and Magical Cowgirl (Corey MacPherson) rounded out the top trio.

ARDC Race 8
Sports Royalty ($41.60) was the longest shot on the morning line at 12-1, but Corey MacPherson engineered the winning trip with a first-over grind from the three-quarter mark to wear down Selkirk Echo (Paul Langille) in a time of 1:55.4. Selkirk Echo stayed for second with Three Trick Gainer (Marc Campbell) third

A full video replay of the ARDC card is available here.

Along with the ARDC races, Red Shores celebrated the fourth annual Harness the Hope night with proceeds being donated to local support programs and services of the Canadian Cancer Society in PEI and the oncology departments of the Prince County and Queen Elizabeth hospitals in PEI.

In other racing action, Barrieau capped off the night winning the Preferred Pace finale with Gold Cup & Saucer hopeful Island Beach Boy in 1:53.2 from his own stable for owners Ian Smith and Arnold Hagen.

Campbell and his trainee Dreamfair Zenfire captured the Fillies and Mares Preferred Pace in 1:54.2 for owners Ryan and Everett MacLeod of Souris.

Akrotiri and Natasha Day won the Female Driving Harness The Hope dash of the night in a new lifetime best of 1:57.1 for trainer Kenny Arsenault and owner David Kent of North Rustico.