Powered By Mach Bounces Back In Plainridge Open 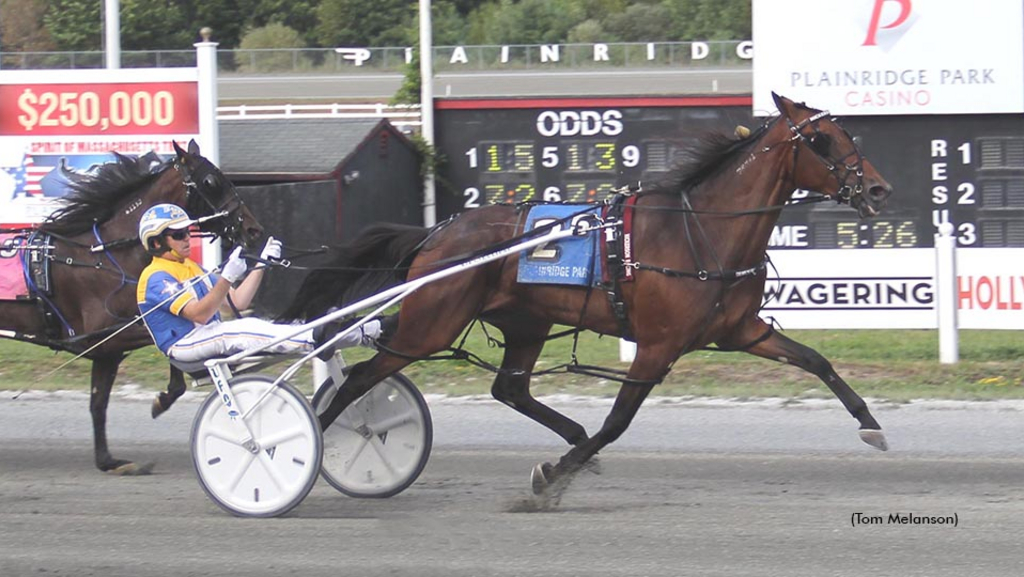 After succumbing to a torrid pace in this same feature last week, Powered By Mach bounced back and won the $20,000 Fillies and Mares Open Handicap Pace at Plainridge Park on Friday afternoon (July 29).

Powered By Mach (Jay Randall) took the lead before the :27 quarter and then backed down the pace to the half with no active challengers. But just past that station, Betterb Chevron N (Matty Athearn) came with an outside rush and took the lead by a head at three-quarters after a :27.1 sprint up the backside. Powered By Mach dug in and put away Betterb Chevron N's bid, regained the lead and out-paced the pocket-sitting Pure Cotton (Bruce Ranger) and late-charging Probert (Nick Graffam) to the wire to win by 1-1/2 lengths in 1:51.2.

The win was the sixth of the year from 22 starts for Powered By Mach ($9.60), who is owned by Fox Racing. Jimmy Nickerson trains the winner.

Nickerson and Randall also teamed up to win the $15,000 Fillies and Mares Open II Pace with Thats Incredible, who overpowered a field of six.

Sweet Sue (Jim Hardy) led the field to the half in :57.1 when Thats Incredible pulled from fourth, bolted to the front and opened up a five-length gap by three-quarters in a :27 flat, 1:24.1 clocking. From there, Thats Incredible held her advantage all the way to the wire, where she won in 1:52.1.