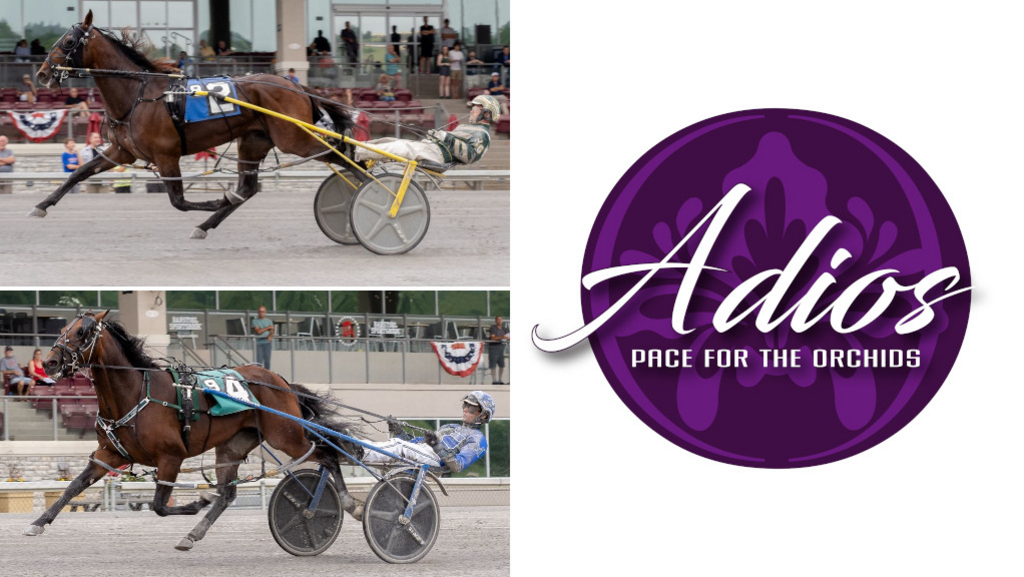 The last time the North America Cup and Meadowlands Pace winners met in a final of the Delvin Miller Adios, the race produced, in the words of track announcer Roger Huston, “an epic battle.” It was in 2017, and North America Cup champion Fear The Dragon used a lengthy first-over march to overtake pacesetting Meadowlands Pace champ Huntsville in the stretch and win by a half-length in 1:49.1.

Fans will be looking for another memorable edition of the race Saturday when North America Cup winner Pebble Beach and Meadowlands Pace winner Beach Glass renew acquaintances in the $350,000 Delvin Miller Adios Pace for the Orchids at Hollywood Casino at The Meadows. Both three-year-olds were elimination winners last week, and both were victorious by identical margins of 5-3/4 lengths.

In June, Pebble Beach, trained by Noel Daley and driven by Todd McCarthy, won the $1 million North America Cup by 2-3/4 lengths over Beach Glass at Woodbine Mohawk Park. The Adios elim was his first race since that triumph. He has four wins and a second in five starts this season.

Two weeks ago, Beach Glass, trained by Brent MacGrath and driven by Yannick Gingras, won the Meadowlands Pace by 1-3/4 lengths over Mad Max Hanover at The Meadowlands. He has four wins and two seconds in six races this year.

Beach Glass is the 9-5 morning-line favourite, leaving from post five in the nine-horse field. Pebble Beach is the second choice at 5-2, starting from post three.

“They both looked like they were comfortable,” MacGrath said referring to last week’s wins. “You know Noel is going to be ready. It should be a good race. We’re excited and optimistic.

“We had a great week. (Beach Glass) is feeling good and sharp and happy and healthy and content. We’re in great shape.”

Beach Glass brings a three-race win streak to the Adios final. He won his elim in 1:49 over a sloppy track. For his career, the homebred son of Somebeachsomewhere-Im With Her has seven victories and three seconds in 11 starts. He has earned $628,250 for the MacGrath-led ownership group Schooner II Stable.

“We thought we had this kind of horse all along,” said MacGrath, who also trained and co-owned Hall of Famer Somebeachsomewhere. “We went into the North America Cup with a horse that I got ready a little quicker than I wanted. When he came out of the race the way he did, we were quite sure he was going to drive on from there. And he has. He’s just getting stronger every week, and more experienced.

“I’ve talked about him being green a number of times. It’s one thing to be green from racing, but it’s another to be green from the top level, where it is different. You have to race four or five horses hard to get the job done. He’s stepped up and done that. They’ve come at him hard his last two starts. He’s doing exactly what we hoped he would, and kind of how we thought he might do it.”

Pebble Beach, a son of Downbytheseaside-Santa Rosa, won his Adios elim in 1:50.1, also over a sloppy surface. Lifetime, he has 11 wins, three seconds, and two thirds in 16 races. He has earned $944,250 for owners Patricia Stable, Joe Sbrocco, Country Club Acres, and Laexpressfoderadeovolente.

“He seems real good,” Daley said. “I’ve been happy with him all year. I hope he just stays on that path, stays healthy and sound.

“It will be interesting to see how it all shakes out. (Beach Glass) is going much better than he was. When we beat him in Canada, we beat him for fun, but he’s improved a lot since he came down for the Meadowlands Pace. He’s been night and day better. He did it very easily last week as well. It will be a good race.”

In the 2017 Adios, one of two meetings between North America Cup and Meadowlands Pace champs in the past 25 years, Fear The Dragon went off at odds of 6-5 while Huntsville was 4-5. No other horse was lower than 13-1. It could be a similar tote board Saturday, with Beach Glass and Pebble Beach taking the bulk of the action.

“They’re the two to beat,” Daley said. “The one chance for a spoiler, if something went crazy, is (Ron) Burke’s horse (Bythemissal). He looked to be raced pretty conservatively last week. But he would have to step up.”

“Our horse likes cover, he loves to follow, so I don’t think it really matters. As long as he gets a clear shot at the top of the stretch, he should give a good account of himself. He has so far.”

Racing begins at 11:45 a.m. (EDT) Saturday at The Meadows. The Adios is race 15 on the 16-race card, with an estimated 5:02 p.m. post time. The SC website will feature a live stream of the Adios Day card on Saturday.