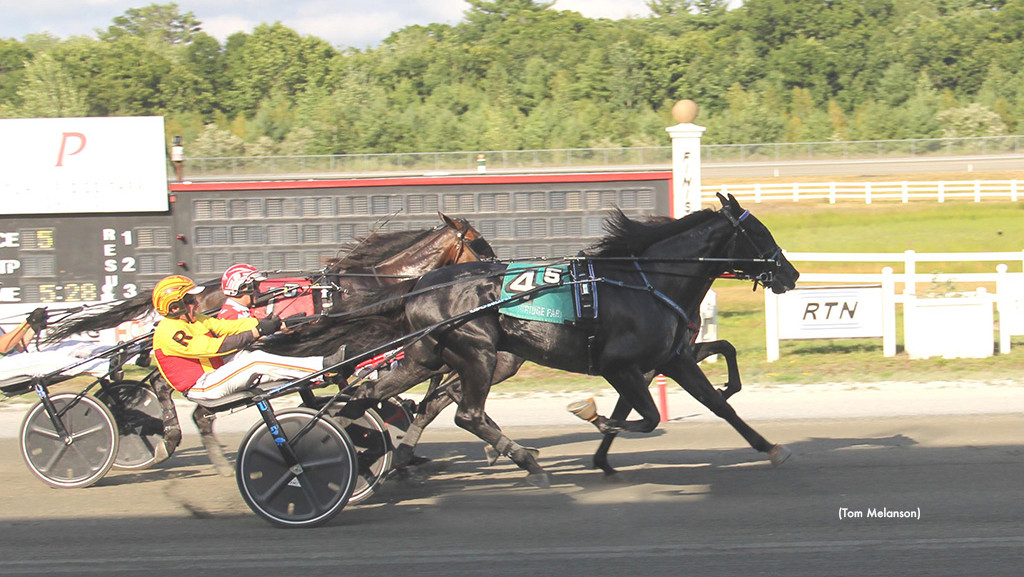 Although he fell short in the top class last week, Marquis Lafayette got back to his winning ways after taking the $20,000 Open Trot this week at Plainridge Park on Thursday afternoon (July 28).

The short field of five horses left the gate in post position order with Chapolier (Matty Athearn) taking the helm. Then, the trotters remained in that order to the quarter in :28.1 and the half in :58.1. Midway up the backstretch, Raybarnz (Ivan Davies) pulled from third and drew alongside Chapolier around the final turn with Marquis Lafayette (Bruce Ranger) on his back. At the top of the stretch those three were spread across the track with Raybarnz getting the advantage over Chapolier before Marquis Lafayette ran Raybarnz down at the line to win by a nose in 1:54.1.

It was the fifth win in the last six starts - all at Plainridge Park - for Marquis Lafayette ($7.40) and owner Greathorse. Domenico Cecere was the winning trainer.

Later in the $15,000 upper level conditioned trot, Swan Fine Lady (Ron Cushing) took the lead just past the :27.2 quarter and then took it to the house. After putting away a challenge from Vesuvio Bi (Nick Graffam) on the back straight, Swan Fine Lady then held off late brushes from Goodashim (Bruce Ranger), Midnite Craze (Ivan Davies) and Gabby's Wild Child (Jay Randall) to win by a length in 1:54.4.

It was the fifth win of the year for Swan Fine Lady ($4.40) and her owners Ron Cushing, Kevin Sywyk and Lance Downs. Heidi Gibbs trains the winner.

Cushing and Gibbs also teamed up to win with Muscle Gene who got up late in 1:57 and lit up the tote board with a $47.00 mutuel.

Wally Watson and Jay Randall also had two driving wins while trainer Lisa Watson doubled up on the conditioning side.

Live racing resumes at Plainridge Park on Friday afternoon (July 29) with post time at 4 p.m. Free full past performance race programs for all live race days can be downloaded by visiting the track's website and clicking the "Racing" tab.