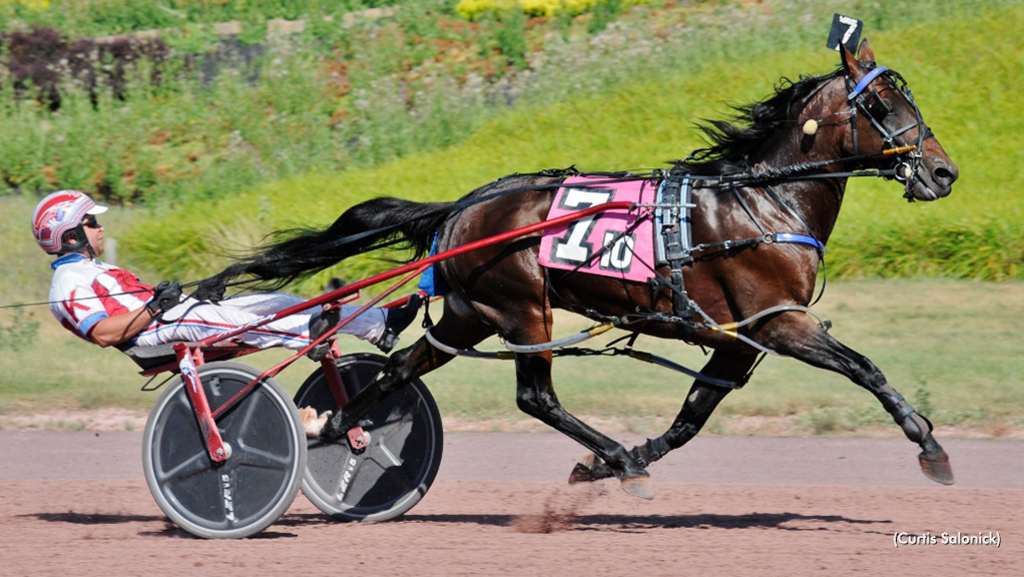 Catch The Fire blazed to a 1:47.4 victory in the $25,000 fast-class pace on Saturday afternoon (July 23) at The Downs at Mohegan Sun Pocono, equalling the fastest mile of the year at The Downs first posted by American Courage three weeks ago.

Catch The Fire was sent at 2-5 despite not having a victory in 2022 (to expand on a pre-race note of track announcer Jim Beviglia, “In his last race the winner went 1:45.4, so Catch The Fire had an excuse”), but this win was by no means handed to him. Ultimaroca left fast from the pylons and hung the Matt Kakaley-driven son of Captaintreacherous well past a :25.4 quarter before finally yielding for the pocket. Catch The Fire then rolled to mid-race fractions of :53.3 and 1:21, nearing the latter station joined by J M Mandamin, who made a challenge but could not sustain it though finishing second 3-1/2 lengths behind the winner and three-quarter lengths ahead of third-place Ultimaroca.

Catch The Fire, whose mark of 1:47.2 was taken at The Meadowlands last year, on Saturday came within four-fifths of a second of the five-eighth mile track all-time standard of 1:47, reached here three times: once by Sweet Lou and twice by Always B Miki, who also reached that clocking at Scioto. Todd Luther trains the career winner of $1,361,274 for Black Magic Racing LLC and CT Stables LLC.

Storm Is Raging, who trotted a season's best mile over a five-eighths track of 1:52.1, topped the speed of the day's trotting winners. In a $17,500 co-feature Saturday, the altered son of Explosive Matter “only” had to go in 1:52.4, putting down fractions of :28, :57.1, and 1:24.2 en route to a 5-1/2-length win over Baldaquin under the guidance of Matt Kakaley, who added to his meet-leading win total with four victories for the day’s honours. Trained by Ron Burke, Storm Is Raging is owned by Carl Cocciolone, Mark Sosovicka, and Jack Piatt III, and it is significant to note that he pushed his earnings of $101,119, winning his way out of this class and promising contests against tougher foes.

In the pacing co-feature on a hot day, an oppositely-named horse to Catch The Fire in Casual Cool, proved dominant as well, making the lead and setting fractions of :26.2, :55.1 and 1:22.3 in progress to a 1:49.4 success. Jim Pantaleano won with the American Ideal gelding in this class for the second-straight week, with the pacer upping his lifetime bankroll to $529,190. Daniel Renaud is the trainer of Casual Cool for Dune Road Stables LLC.

On Sunday’s (July 24) card at Pocono, there will be three $30,000 divisions of a Pennsylvania All Stars event for two-year-old pacing fillies, and a $25,000 fast-class distaff pace. First-race post time is 5 p.m. (EDT). Program pages are available at the PHHA website.