Frazzleberry Holds On In Pocono Feature; Five For Napolitano 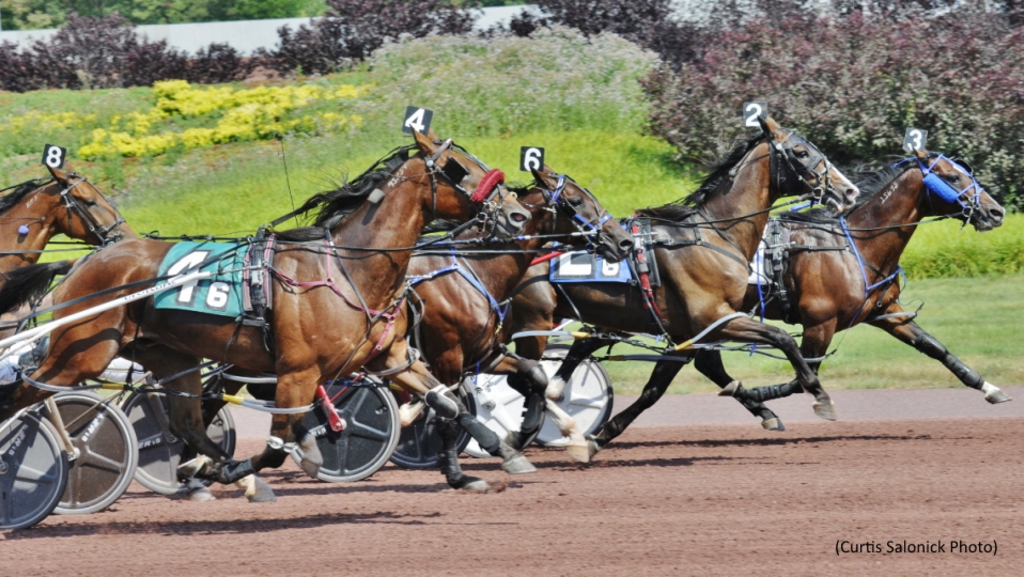 Frazzleberry got his own way on the lead past the half in the $13,000 featured pace at The Downs at Mohegan Sun Pocono on a hot Tuesday afternoon, but he still had to work hard late to hang on to a nose victory over Fulsome in 1:54.2.

George Napolitano, Jr. moved the son of Art Major to the lead early, got a :30-second breather in quarter two, but then faced a challenge from first-over Fulsome most of the way home. Others joined in the dash to the wire, but the camera showed Frazzleberry a winner by the smallest of margins over his grinding foe, with Ripplesonthebeach third, just a neck from taking it all after photoing out late-clearing Win Place N Show for the show dough.

Frazzleberry has now captured two of his last three starts, with a second in between, for trainer Jose Godinez and the partnership of Joseph Betro, Ian Behar and Kristie Leigh Farm Inc.

In the first of two $12,500 trotting co-features, Top Me Off, a son of Bar Hopping who was the winningest three-year-old diamond-gaited male in North America last year with 15 victories, posted a second successive success with a 1:54.4 triumph, moving in front of the stands to take control and going on to win for driver Matt Kakaley and trainer/owner Arlene Cameron, who combined for a pair of wins on the card.

The other top trot went even more quickly, as driver George Napolitano, Jr. took his second feature of the day, this one with Cant Say No in a lifetime best 1:54. The son of Explosive Matter never relinquished control from the pole and left his opponents far behind  in winning for the second straight time for trainer Tee Wine and Jemaxpo Racing Stable LLC.

Napolitano perennially the track’s leading driver, had five wins on the day. Uncustomarily, though, he is looking up for second this season at Matt Kakaley, who leads in sulky victories this season and added three on Tuesday.

Excellent racing will be featured this weekend at The Downs. On Saturday’s 1:30 card, there will be a $25,000 pace with such stalwarts as Catch The Fire, J M Mandamin and Southwind Ozzi top contenders; the last race High-5 bet will have a $6258.52 carryover. A similar $25,000 event for pacing distaffs appears on Sunday’s 5:00 program, along with three $30,000 Pennsylvania All-Stars divisions for two-year-old pacing fillies, with several of them already having stakes success