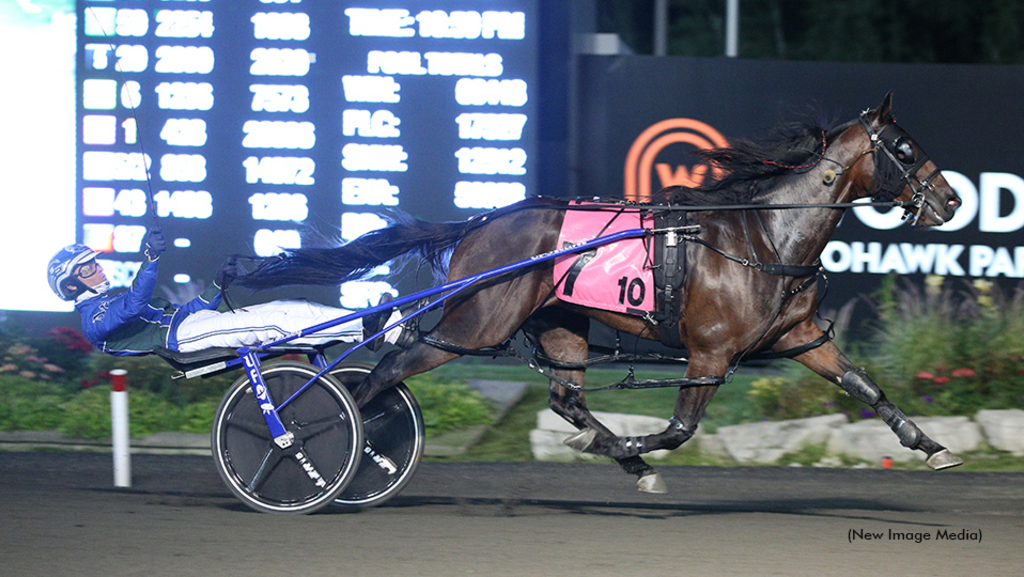 Last year’s older pacing champion was sent to the lead from the outside in the field of six by driver Todd McCarthy (top driver of the day with four victories) and reached that spot before the :26.4 first clocking, then continued to midrace fractions of :55.2 and 1:22.3. Fellow millionaire Southwind Ozzi came out of the pocket on the far turn to gain some and momentarily give the crowd a thrill, but McCarthy sat chilly in the bike as Allywag Hanover came home in :26.4 to a deceptively easy victory with the game Southwind Ozzi three-quarters of a length back. The winner of $1,344,872 got his first success of this season for trainer Brett Pelling and the Allywag Stable.

Virgo commenced an uncovered bid from third past the five-eighths of the $15,300 co-featured pace after Pat McGarry A had posted early fractions of :26.2 and :55.1, and kept gaining even though the timer read 1:21.4 at the three-quarters. Corey Callahan guided the altered son of Always A Virgin to the lead in the stretch, then won the late battle of yellow-and-green by holding off strong closer Southwind Sandor by a neck in 1:49.3. Dylan Davis co-owns the winner of $377,872 with Howard Taylor.

Tony Beltrami, who won two of the American Harness Drivers Club paces on the Friday (July 15) card at Philly, came back and swept the two trots carded for amateur horsemen on Sunday. All Rise didn’t see the rail until the three-quarters but still won in 1:57.4 for owner Beltrami and trainer Edwin Quevedo, and then Tidquist overcame first-over duties to record a 1:56.2 win for owner-trainer John Obert.

Two-year-old colts in the Pennsylvania Sire Stakes and Stallion Series will be the featured performers at the beginning of this coming week – pacers on Wednesday (July 20) and trotters on Thursday (July 21). Program pages are or will be available at the PHHA website.

Allywag and Catch the Fire

How much money could one have made if they placed a bet on New Year's Day that, between the 2 of them, Allywag Hanover and Catch The Fire wouldn't win a single race during the first 6 months of 2022???