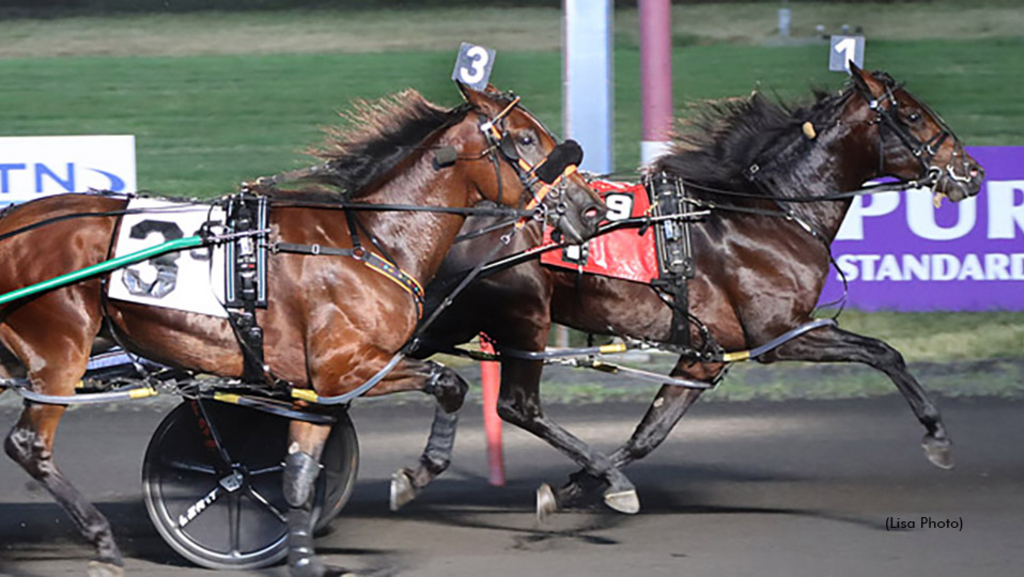 Dexter Dunn went for a Sunday drive on Friday night (July 8) at The Meadowlands, rating a slow enough pace to allow Handlelikeaporsche to hold off 4-5 favourite Lifes A Puzzle at the wire in the $30,000 second leg of the New Jersey Sire Stakes for two-year-old colts and geldings on the pace.

The son of Lazarus N-The Signature used the rail to his advantage as if he were racing on a half-mile track, securing the top around the first turn before reaching the quarter in a leisurely :29.2 as Lifes A Puzzle (Tim Tetrick) sat in the pocket.

There was no action to the half, which went in :58, or three-quarters, which went in 1:25.3. Given the fact that Handlelikeaporsche closed in :26.1 when beaten two weeks ago by Lifes A Puzzle, it would prove tough to catch him this time around.

Lifes A Puzzle almost pulled it off, closing in :25.4, but came up a neck short. Voukefalas was third.

Both Handlelikeaporsche and Lifes A Puzzle now have one win from two lifetime starts, with one win against the other in the NJSS.

Handlelikeaporsche, the 9-5 second choice who is trained by Chris Ryder, paid $5.80 to win after completing the mile in 1:51.3.

There were also two $30,000 NJSS splits for two-year-old colts and geldings on the trot.

The first was taken by Celebrity Bambino, a son of Muscle Hill-Celebrity Ruth, in 1:53. Driven by Yannick Gingras and trained by Ron Burke, Celebrity Bambino, the 7-2 third choice in the wagering, sat a pocket trip before going by leader Ari Ferrari J on the way to a 1-3/4-length win over Dire Straits, who rallied to get second.

Oh Well was ultra-impressive taking the other division for trotting males, overcoming post nine. Driven by Tetrick for trainer Marcus Melander, the son of Muscle Hill-Fine Tuned Lady made a big move around the far turn to get into contention, then continued to chip away at leader Up Your Deo’s edge before nailing that one at the wire by a head in 1:54.1 as the even-money favourite.