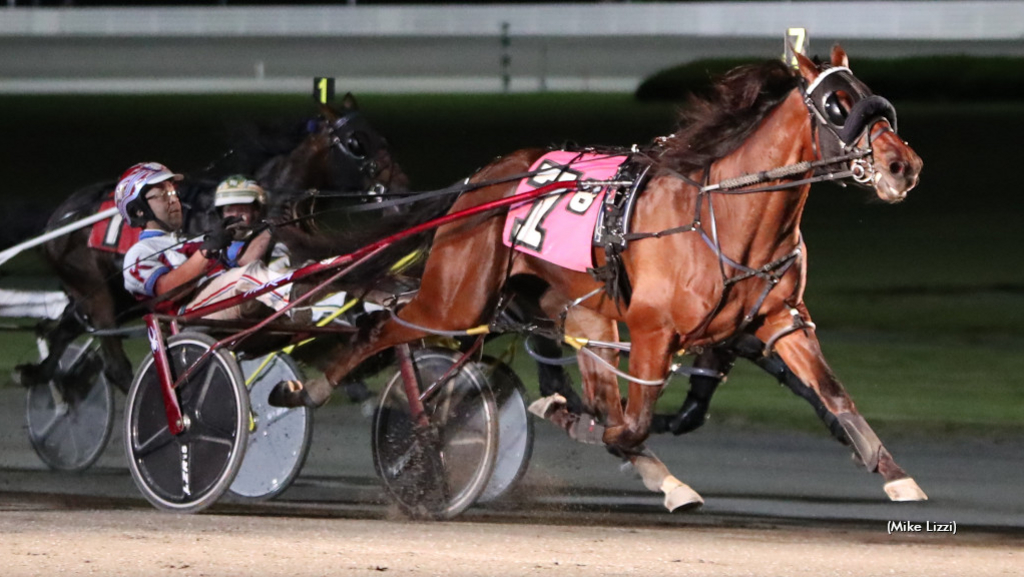 It would be favourite (Yannick Gingras) who set the pace in the event, carving out fractions of 27, 55.4, and 1:24 after going to the front from post four. Pleaseletmeknow and Kakaley grabbed a seat in fourth from post seven, went first-over after the half, and advanced into second on the way to three-quarters.

managed to keep Pleaseletmeknow at bay on the last turn, but Pleaseletmeknow surged by the tempo-setter in mid-stretch and went on to tally by a length. had to settle for second over Captain Cowboy (Dexter Dunn), who tipped out in the lane after a pocket trip and closed well.

"My gameplan was just to push and hope for a spot. If Yannick was getting around Dexter too easy, maybe we were going to have to push the pace a little bit, but it went the way I thought it would," remarked Kakaley. "Dexter protected the two-hole and we found a spot in fourth. I was pretty confident once we could be first-over. This colt, he doesn't give up. He's just a little fella, but he gets around a half so good. The half-mile track is probably a little bit to his advantage."

Pleaseletmeknow is an American Ideal gelding, and he has eight victories from 13 career starts. He pushed his bankroll to $362,324 and paid $9.40 to win.

"He's come along in a big way. Last year, he was awful training down, and we didn't stake him very much," said Alexander, who conditioned American Courage to victory in the 2021 edition of the MGM Grand Messenger. "Once he saw the starting gate he took off.

"He's got the () sire stakes, he's got the race at Pocono (Max Hempt), and we might talk about taking him to the Little Brown Jug. We'll see."

The 4-5 favourite Wickedly Innocent (Todd McCarthy) came out of the pocket and took over the lead from Hanover (Gingras) after the :26.4 opening quarter and kept the tempo hot from there, hitting the half in :54.3 and the three-quarters in 1:23. Gotthegreenlight, who tucked into third from post seven, got going first-over heading to the latter marker, with Wine N Dine Me on her cover second-over.

A daughter of American Ideal bred by Stephen Dey, Gotthegreenlight is trained by Richard ‘Nifty’ for Patricia Stable and Kovach Stables LLC. An earner of over $300,000 lifetime, she has won 11 times from 17 career starts, and she paid $9.30 to win as a 7-1 shot.

Scott Di Domenico trains Wine N Dine Me, a filly bred by Steve Jones and Jonathan Kurnit, for owners Triple D Stables Inc., Donald Robinson, Michael Robinson, and Howard Taylor. She has compiled a record of 3-1-3 from 13 lifetime attempts, and scored by far her most significant victory to date. Dispatched at 18-1, she returned $18.40 to win.