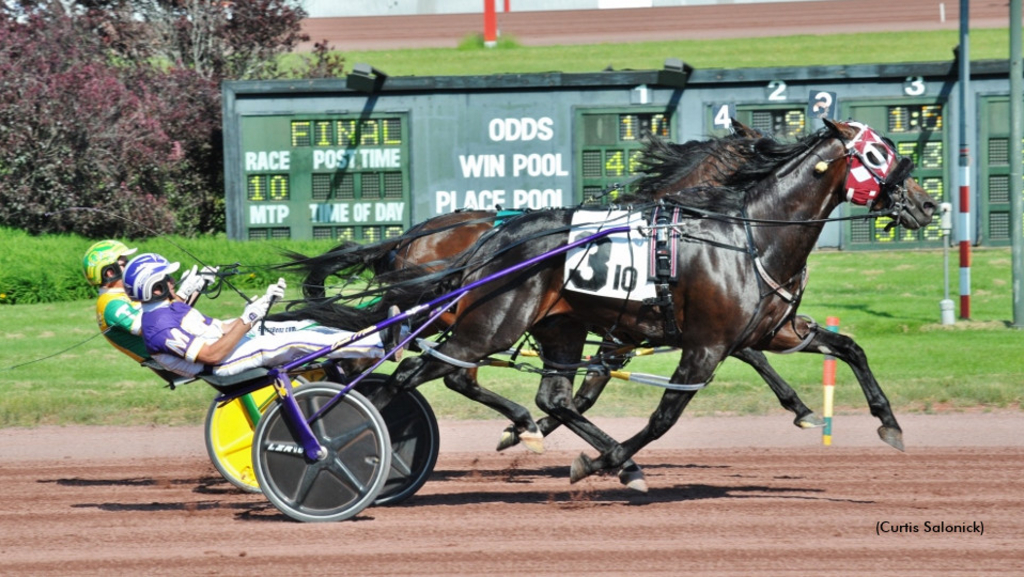 The “glamour boys,” the three-year-old pacers, were at Pocono for the Memorial Day Monday holiday card, competing in the second preliminaries of their respective events: three divisions of a $138,758 Pennsylvania Sire Stakes, and four $20,000 cuts of the complementary Stallion Series.

The acclaimed Betting Line colt Night Hawk lived up to his accolades in his Sires division, winning in 1:48.4 – a new mark, the fastest mile of the year at Pocono, and tying Let It Ride N yesterday at Philly for fastest mile in eastern Pennsylvania in 2022.

But you can’t tell this Night Hawk story without giving due credit to Mad Max Hanover. “Max” made the lead just past the :26.3 quarter, then kept up a searing pace with mid splits of :54.2 and 1:21.2; the field stayed strung out until David Miller moved Night Hawk out late on the backstretch, soon hooking up with the leader.

In early stretch Night Hawk gained a slight advantage, but Mad Max Hanover hung in there dead-game to the wire, and the difference between the two Pennsylvania All-Stars winners here earlier was only a neck on the money. Night Hawk now has five wins in six lifetime starts, his only loss a second in the first leg of the Sires, and he looks likely to be in the headlines for a while for trainer Brian Brown and owners Leeman Lombardo Stable, Joe Sbrocco, In The Gym Partners and Acadia Farms Inc.

Other than the star performance of Night Hawk, it was pretty much The Sweet Lou Show the rest of the stakes afternoon, as the noted sire produced the other two Sire Stakes winners and three of the four Stallion Series winners. (Sweet Lou also got three credits in the Stallion Series for the colts’ female counterparts at Philly the day before.)

Along with the top two mentioned above, the third All-Stars winner here earlier was the colt Market Based, and he took his second Pocono start with a victory in 1:50.4. Dexter Dunn got the two-hole behind P J Lou as that one was on a wide lead through fractions of :27.2 and :56, then narrowed in. The outer tier didn’t make too much headway in the fast third quarter, which was reached in 1:22.4, giving Dunn plenty of room to edge out from the two-hole and go right to the lead, defeating inside late gainer Ario Hanover by 1-1/4 lengths.

Market Based broke in his seasonal bow in the first Sire Stakes, but he’s been perfect in a pair of starts since for trainer Nancy Takter and owners Chuck Pompey, Edwin Gold and H&M Taylor Stable. He now has $261,183 on his career card.

A five-horse division of the Sire Stakes saw the unusual (even in a big field) configuration of horses going four-wide into the first turn, with Captain Cowboy taking over from Six Feet Apart past a :26.2 quarter. The favourite Captain Cowboy was relatively unbothered through middle fractions of :55.1 and 1:23.1, but on the far turn he had to meet the challenge of Fourever Boy, who took back to fourth early then came uncovered nearing the final bend. The pair were joined by Six Feet Apart, who inched ever-closer in the Pocono Pike, and in a dramatic three-way late battle, the Sweet Lou colt Fourever Boy was a nose ahead of Six Feet Apart in a new mark of 1:51.1, with Captain Cowboy another neck back in third.

Fourever Boy was winning for only the second time in his career, but good cheques in freshman stakes company enabled him to raise his career bankroll to $244,795. Mike Wilder got everything he could from Fourever Boy for trainer Tim Twaddle, who is also co-owner with Micki Rae Stables LLC.

Two of the Sweet Lous were taking their second Stallion Series races. The faster of the pair was Dancin Sancho, who had been off 23 days since that Meadows StS win, but trainer Todd Luther had him ready, with the gelding swinging wide off cover and gaining a three-quarter length decision over favoured Jo Pas Warrior in a new mark of 1:51. Scott Zeron piloted the winner for Black Magic Racing.

The other who now has two Stallion Series wins is the gelding Code Cracker, whom Yannick Gingras moved out of the pocket nearing the three-quarters, took the lead, then held off a big late brush from Hecandancencruise by a nose for trainer Ron Burke and Burke Racing Stable LLC and Weaver Bruscemi LLC, Michelle Yanek and Phil Collura. Code Cracker’s 1:51.2 clocking lowered his own best win time.

Sweet Lou was also represented in the StS winner’s circle by the gelding Boston, who followed the day’s dominant pattern of coming from just off the pace to win, overhauling Rocknroll Gold by three-quarters of a length in 1:52 for driver Dexter Dunn, trainer Jenn Bongiorno and owners Glenn Goller and Stephen Demeter.

Captaintreacherous got on the sire scoreboard when his Atlas Hanover took a new mark of 1:51.2 after being in control from the three-eighths, crossing the wire six lengths to the good. Dexter Dunn won his second Stallion Series race and his third stake of the day with Atlas ; the gelding was 0-for-14 in 2021 but is now 2-for-2 in 2022 for trainer Tony Alagna and the ownership of Robert Leblanc, David Anderson, Kenneth Jacobs and In The Gym Partners.

Pocono closes out its racing week with a 1:30 p.m. card on Tuesday.