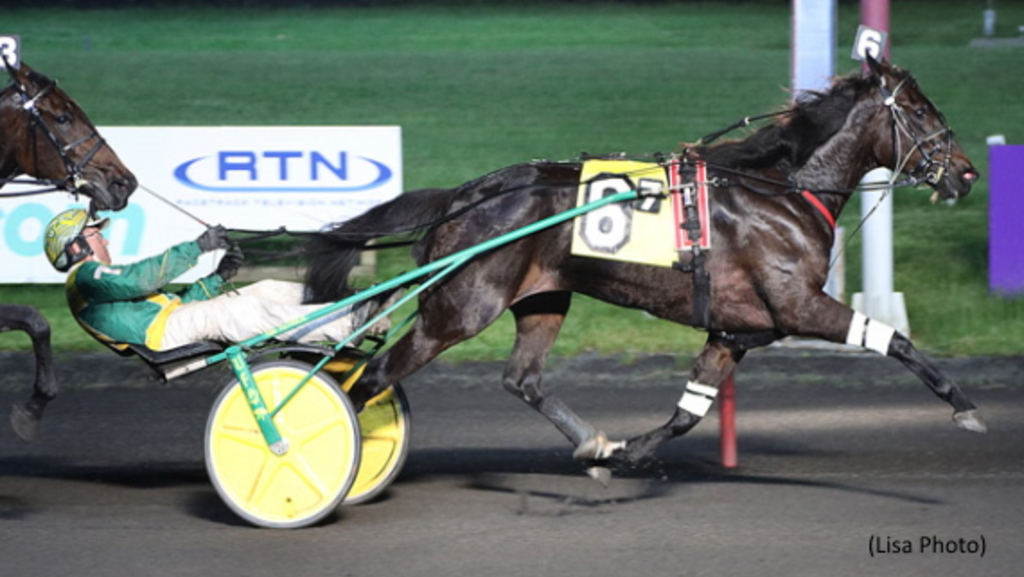 The Friday night action at The Meadowlands featured a pair of $240,000 New Jersey Sire Stakes finals for three-year-olds on the trot, and Fashion Schooner and Pretender were the winners of their respective divisions.

Fashion Schooner, a daughter of Walner and 2009 Hambletonian Oaks champion Broadway Schooner, impressed in the split for fillies, making the lead while parked past the quarter in :26.3 and going down the road from there, recording a safe 1-length win over 2-1 second choice Jiggy Jog S in 1:51.3, a new lifetime best. Misswalner Fashion was third.

“I was very impressed by her,” said winning trainer Jim Campbell, who conditions both the winner and third-place finisher. “I was happy that [driver] Timmy [Tetrick] was able to use her to get good position. He then backed down the second quarter very well. She did whatever Timmy wanted her to do. She dug in and couldn’t have been better.”

After a two-year-old season that saw her make only three starts and win none, Fashion Schooner upper her 2022 stats to three wins in four tries, good for lifetime earnings of $150,062.

“She got off on the right foot this year,” said Campbell. “I still really believe that even though she raced only three times last year, it really prepared her for this year. She didn’t race much because she got sick in early springtime and took a long time to get over it. The Hambletonian Oaks is definitely something we are aiming for.”

Trainer Nancy Takter no doubt has Hambletonian dreams dancing in her head after her Pretender took the division for colts and geldings in 1:52.1.

Driver Yannick Gingras had to make a bold decision down the backstretch, as he had to steer Pretender three-wide around a struggling Classic Hill at the three-eighths, but for the Muscle Hill-Maven product, it turned out to be the right move, as Pretender cleared the top just after the half before withstanding a wicked late charge by 7-5 favourite Temporal Hanover to record a neck win in 1:52.1. Periculum was third.

“I would rather have not gone three deep but it was a straightaway, so I thought it was the move to make,” said Gingras. “You’re going for that kind of money, so people are going to try. Week by week, Pretender is getting better and better. I was confident in the horse but nearing the wire he was a little lonely. I’m very happy with his performance.”

Pretender has now won three of four this year and five of 16 lifetime. His bank account stands at $253,128.

Before the regular 13-race card, a pair of $100,000 New Jersey Sire Stakes finals for three-year-old pacers were contested as non-betting events.

In the split for colts and geldings, Count Mara surged to the lead around the far turn before going on to win by 7-3/4 lengths over a sloppy track in miserable, rainy conditions.

The John Pyott trainee, a gelded son of Lis Mara-Madam Countess, was driven by Tetrick and won for the third time from 10 lifetime starts while establishing his lifetime-best of 1:58.3. Polaris Breech was second.

Not So Evil took the division for fillies in 1:56.3 for the husband and wife team of driver Pat and trainer Traci Berry. The daughter of Great Vintage-Evil Fight surged to the lead at three-quarters before holding off second-place finisher Bee Aware by three-quarters of a length to record her fourth victory from 10 lifetime outings.

The Brett Pelling-trained Wickedly Innocent, a three-year-old by American Ideal-Miss Innocent, remained unbeaten in five 2022 outings, charging home from eighth at three-quarters to score in last-to-first fashion for driver Todd McCarthy in a lifetime-best 1:51 in a mid-range conditioned event for pacing fillies and mares as the 3-5 public choice.