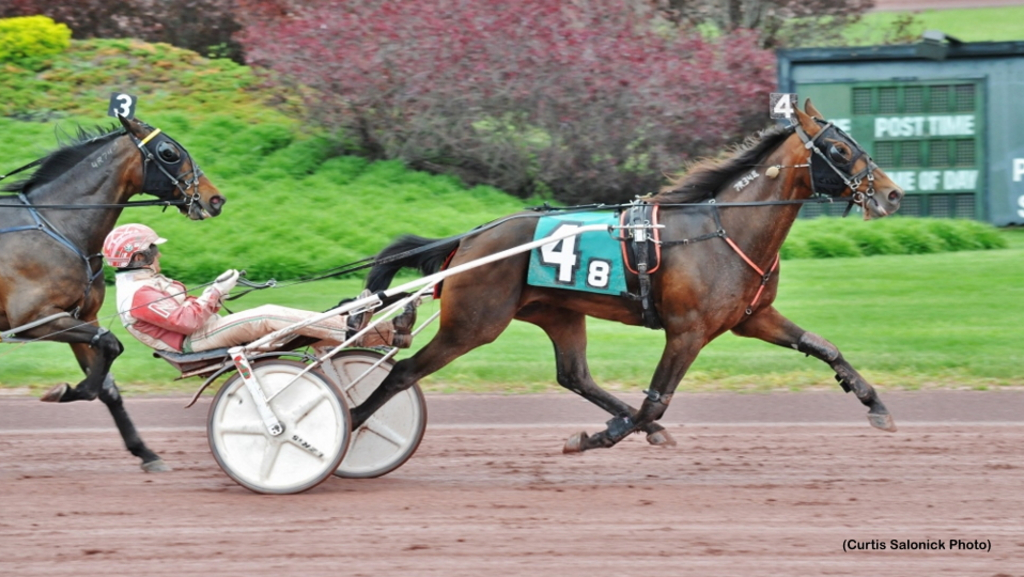 There was a pair of $11,000 featured events at The Downs at Mohegan Sun Pocono on Monday afternoon, with favoured Straight Up Cool winning the pace in 1:52.4 after a rainstorm came through the area, and 30-1 shot Lazer Jet upsetting in the trot in 1:57 before the weather became unsettled.

Straight Up Cool, a gelded son of Straight Shooting who missed just a neck in his Pocono bow last week, had to work hard to get the victory here, tucking and then coming uncovered from the half, but he wore down pacesetting Nome Hanover by 1-1/4 lengths under the handling of George Napolitano, Jr. for trainer Mike Watson and owner Clifford Grundy.

Lazer Jet was let go at a generous price - he did make breaks in his previous two starts, but he had won in his start before that. On Monday, he went first-up, challenged the pacesetter and swept right by en route to a 3-3/4 length victory in 1:57, making driver Jim Pantaleano the first driver to post two $50+ winners at Pocono this season. The son of Harry The Horse is trained and owned by Austin Brubacker.

Sarah Svanstedt, who had not visited the winner’s circle as a driver since April 12 of 2019 (she’s been there with husband-trainer Åke on a few occasions in recent years), won with both of her drives behind maiden horses trained by her husband, and over off going to boot.

First came Extrordinarylady S, a sophomore daughter of European champion Maharajah who has Malabar Man in the third generation of her pedigree, a winner in 1:59.1 for Menhammar Stuteri AB.

Sarah then came back with first-time starter Finn Palema, a Muscle Hill sophomore colt, and won in 1:57 for the ownership of Åke Svanstedt Inc, Bender Sweden Inc and Flygind Gaard Inc.