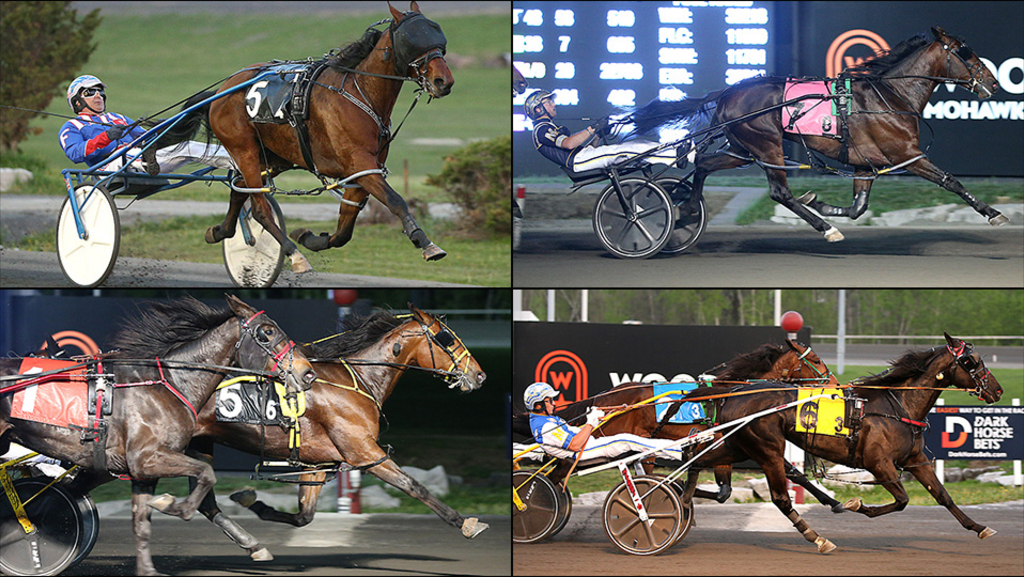 Stakes season officially kicked off on Friday evening (May 13) at Woodbine Mohawk Park with the SBOA Stakes eliminations for Ontario-sired three-year-old colts and geldings.

A pair of $25,000 eliminations were need for both the pacing and trotting divisions. The top five finishers from each division advance to next week’s finals.

Star Power Hanover made a second-quarter move to the top to lead the field by the half in :58.3 and three-quarters in 1:28.3. Twin B Archie sat fifth in the early stages and latched on to cover behind Esplosione.

The sophomore trotters sprinted home, with Twin B Archie muscling by a game Esplosione to win by half a length. Mr Fritter grabbed third while Star Power Hanover settled for fourth and Tymal Tiggs was fifth.

A gelded son of Archangel, Twin B Archie came in off a pair of qualifiers, winning his most recent in 1:55.3 after making a late break the week prior. The Scott McEneny trainee is now five-for-11 lifetime, with nine a total of top three-finishes, and has earned $297,516 for owners McEneny, Domenic Chiaravalle, Floyd Marshall and Martwest Racing Stable.

Evil Guy lit up the toteboard with a 48-1 stunner in the second elimination.

Evil Guy and driver Trevor Henry stepped out to the early lead, posting a :27.4 opener. Stable Genius looped around to command entering the backstretch and raced by the half in :57.3. Red Overbach came to the outside from third, providing second-over cover for 4-5 favourite Duly Resolved on the far turn.

After reaching three-quarters in 1:26.4, Stable Genuis brought the field into the lane with rivals ready to attack. Duly Resolved tipped off cover to charge down the centre of the track, while Evil Guy had daylight to exit the two-hole and join the stretch battle. Those two trotters would square off, with Evil Guy prevailing by half a length in 1:54.4. Stable Genius crossed third while Sea Can was fourth and Drinks At Home was fifth.

A homebred for Bill Mane and William Cripps, Evil Guy was winless in 10 starts coming into his SBOA elimination, including two starts this season. The gelded son of Il Sogno Dream is trained by Shannon Henry and was competing last season in the OSS Grassroots.

OSS Super Final winner Bob Loblaw turned in an impressive 1:50.3 effort to win the first elimination for pacing colts and geldings. The time of mile was a national season's record for three-year-olds.

Macho Phil outsprinted Contact Zone to grab early command, posting a quick opening quarter of :26.2. Bob Loblaw got away third and made a second quarter rush to the top for driver Sylvain Filion and led by panels of :55.4 and 1:24.1.

Ron came first-up at the leader on the far turn, but may have only reached the saddle pad before Bob Loblaw kicked home strongly in :26.2 to win by nearly two lengths in a career-best time. Macho Phil finished second, while Chucky Hanover rallied to finish third. Ron’s first-up bid ended in a fourth-place effort. Dynomites Peak rounded out the top five finishers.

Trained by Ken Middleton, Bob Loblaw nabbed his first win of the season in his second outing. The gelded son of Sunshine Beach won three of 12 starts in his rookie season, earning over $233,000 for owners Middleton, Dave Walls, James Grant and Starting Centre Stables.

Stonebridge Helios made his season debut in style by posting a coast-to-coast 1:51.2 victory in the second elimination.

While a trio of rivals did their best to push the winner, runner-up Cold Creek Queso had a strong final quarter overturned by disqualification due to causing interference coming off the final turn. The DQ sent the runner-up back to ninth.

Post positions for both of the Saturday, May 21 finals were scheduled to be drawn immediately following the eliminations, however, the connections of Cold Creek Queso have appealed their disqualification causing the pacing colts and geldings draw to be delayed.

The trotting colts and geldings final was drawn. The post positions are listed below: