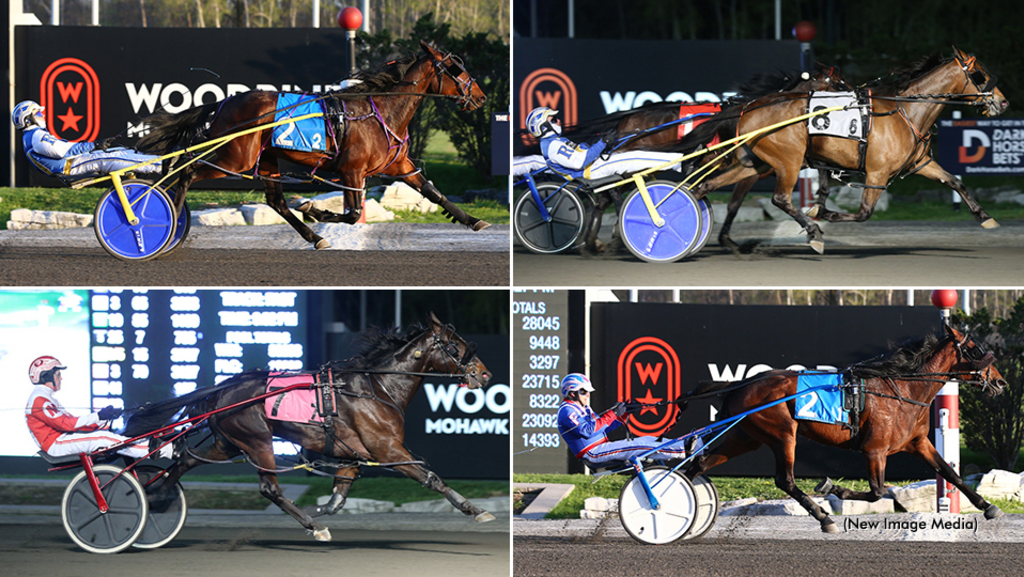 Woodbine Mohawk Park hosted four finals for the Ontario-Sired Spring Series on Saturday night (May 7) with driver Louis-Philippe Roy finding his way into the winner’s circle for two of the four.

Roy scored with Addictivebehaviour in the $54,100 final for three-year-old pacing fillies. After getting away third to a :27.2 first quarter, Roy circled the Bettors Delight filly to the lead and strolled to a :56.3 half before facing first-over pressure by Fromakingtoaqueen, who pressed the pace to three-quarters in 1:24.4. Addictivebehaviour turned that challenger away off the turn and strolled to the finish in 1:53 flat, 1-1/2 lengths better than pocket-sitter Girl In A Tavern in second. Wildcat Star, the 6-5 favourite, kicked from second over for third and Better Double Flip took fourth.

Owned by Mickey Sudar and Arpad Szabo, Addictivebehaviour won her second race from 10 starts this season and her fourth from 14 overall. Brett Lester trains the winner of $72,822 who paid $9.60 to win.

Tymal Tiggs gave Roy his other Spring Series victory when he took the $52,600 final for three-year-old trotting colts and geldings. Roy tracked a sweeping move by odds-on choice Century Invader after a :28.2 first quarter and into a :58.4 half to then duel with that rival to the far turn. Clicking three-quarters in 1:26.4, Tymal Tiggs edged to the lead and maintained a slight advantage to the finish to win by a half-length in 1:55 over Century Invader. Stable Genius rallied for third and Ima Standup Guy took fourth.

Hang On Baby delivered as the 8-5 favourite in the $48,400 final for three-year-old trotting fillies with a 1:54.3 win. The John Kennedy pupil swept out of fourth after a :26.3 first quarter to grind first-over into a :56 half and clear the lead to the far turn. On top by three-quarters in 1:25.1, Hang On Baby scooted clear to the finish to post a 6-1/4-length win over Makin Magic Tonite and All About Addie.

Owned by Ralph and Sandra Pitt, Hang On Baby won her seventh race from 11 starts this season and her ninth from 16 overall. Sylvain Filion steered the winner of $87,395 who paid $5.20 to win.

Trainer/driver Paul MacDonell won the last Spring Series event with a stalking trip for Chucky Hanover, who sprung to a 1:52.2 victory in the $56,200 final for three-year-old pacing colts and geldings. MacDonell motored the Hes Watching gelding to the point past a :28 first quarter but then settled for the pocket when Sport Secret brushed to the lead past a :56.2 half. Chucky Hanover then swung three-wide by three-quarters in 1:24.1 to slingshot by his rivals and coast to a 2-1/2-length win over Sport Secret. Ontop Rainman rode the pylons for third and Google My Chrome rallied for fourth.

Owned by GLB Stable, Chucky Hanover won his third race from four starts this season and his fourth from 11 overall. He has earned $66,090 and paid $8.60 to win.

Saturday's card also featured the debut of a Free For All class and a horse upping an impressive win streak. To read more about those events, click here.