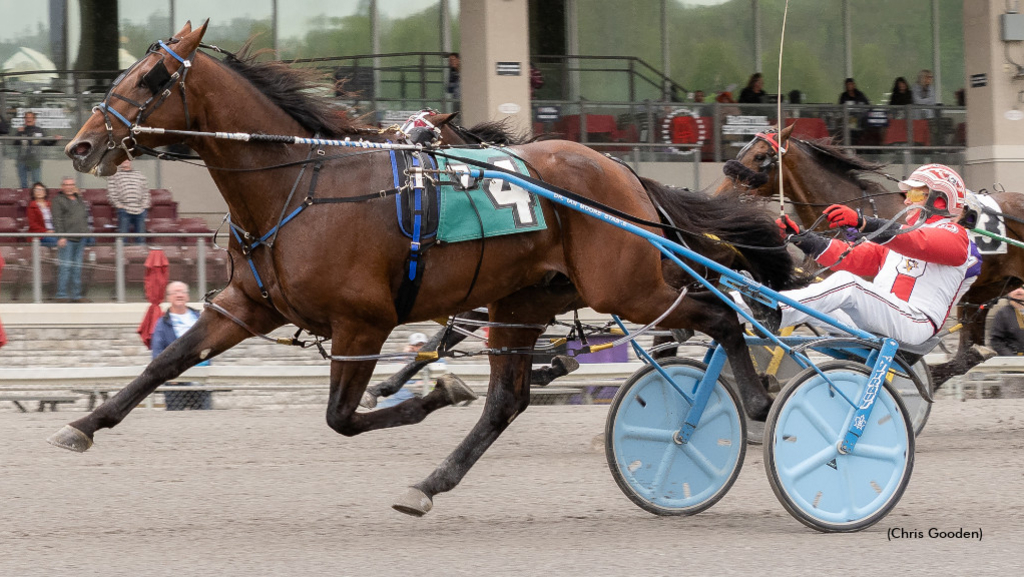 Dismissed at 16-1, Canadian-campaigned Greatest Ending forged a facile front-end victory to pull off the upset in Saturday’s Pennsylvania Sires Stake at Hollywood Casino at The Meadows.  All Or Nothing captured the other division in the event for sophomore colt and gelding pacers known as the Bye Bye Byrd.

Greatest Ending hit the board in all five of his starts at two but banked only $18,246. Even as recently as his April 6 qualifier, his trainer, Dr. Ian Moore, was experimenting with him, taking off his hopples. That experiment ended badly, as the son of Somebeachsomewhere - Lady Be Great broke stride. But winning driver Dave Palone said he has faith in any horse Moore sends postward.

“He’s one of the sharpest horseman that you could drive for,” Palone said. “You know they’ll be ready. He puts no pressure on you, lets you race them however you want. I planned to let the horse make up my mind. It would take a lot to get this big bird tired.”

Coming off a second-place finish in the Weiss Final, All Or Nothing had a more demanding journey, needing more than the entire opening panel to clear to the point for Scott Zeron. But he had little trouble defeating the pocket-sitting Ario Hanover by 1-1/4 lengths in 1:51, matching his career best. Reigning PA champ True Blue Lindy completed the ticket.

All Or Nothing was unraced at two due to a broken P-1 bone, but Nicholas DeVita, who conditions the homebred son of Always B Miki-Booya Beach for John Cummins, said he never lost faith.

“We gave him the time, and he came back really good,” he said. “He’s special.  Look at the size of him. He’s athletic and so muscular. He does everything so easily. He’s not even blowing after this race. He’s staked to everything, but we’ll just take it one day at a time right now.”

In Saturday’s sub-feature, Dancin Sancho converted an inside trip to a 14-1 maiden victory for Trevor Smith, trainer Todd Luther and owner Black Magic Racing LLC. The other splits went to Code Cracker and World For Two.

Dancin Sancho jumped it off in two of his three outings last year and never was closer than six lengths at the wire. Luther and Black Magic could have been excused if they’d wanted out of the Sweet Lou-Dancewiththebest gelding.

“He was real green last year, but the whole family has gotten better with age,” Luther said. “He had a lot of speed. He was immature, but this year I think he’ll put it together for us. He’s green still, so I don’t want to throw him to the wolves until we have to.”

Zeron piloted three winners on the 11-race card, including a pair for trainer Tim Twaddle, while trainer Ron Burke also fashioned a triple.