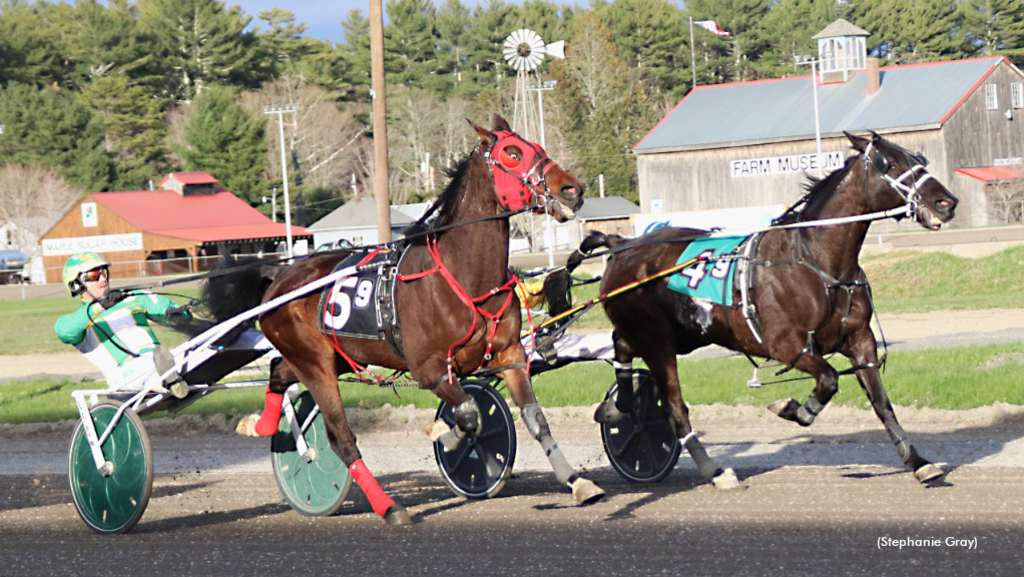 In the featured $6,000 Open II Trot with post positions assigned, Broadway Giant (Post 4, Bruce Ranger) was the first to leave, with Athearn happy to grab the two-hole with Post 5 starter Warrawee Preferred. With a sharp opening quarter of :28.3, Ranger reduced the tempo going to the half in 1:00.2.  Sensing an opportunity, Heath Campbell moved Pembroke Regal to the outside going into the second turn, with Aaron Hall grabbing the second-over cover with Little Macabee as the field passed the stands at the midway point.

While the six-pack of trotters moved down the backstretch into a 1:30.2 three-quarters, Hall tipped Little Macabee three-wide around stalling cover to challenge for the lead.  With the rest of the field drifting backwards, Athearn drafted behind the dueling front runners until mid-stretch where he found racing room with Warrawee Preferred and got up in the final strides to win by a neck in 2:01.3.

For the 11-year-old son of Federal Flex, it was his second win in as many starts, and 58th lifetime victory.  Owned and trained by Ryan Berry, Warrawee Preferred paid $7.00 to win.  Broadway Giant finished second; Little Macabee was third.

In addition to Athearn winning three dashes on Friday, Kevin Switzer Jr. had two driving wins on the card, giving him a one victory lead (12 total) in the Cumberland drivers’ standings over Dan Deslandes (11), with Bruce Ranger and Matt Athearn tied for third with eight victories apiece.

Saturday’s (April 30) card features two divisions of the Maine Amateur Driving Club, as well as a host of competitive conditioned pacing events for the astute punter.

The tenth and final race on both Friday and Saturday features our 20 cent Hi-Five (Pentafecta), with a low takeout of 16 percent.

First Tracks Cumberland is also pleased to announce that racing fans and bettors will be able to watch and wager on next weekend’s iconic programs from Churchill Downs.  Each card starts at 10:30 a.m. and features the Kentucky Oaks on Friday (May 6) and the 148th running of the Kentucky Derby on Saturday (May 7).  Programs, betting windows, monitors and concessions will be available in the Fairgrounds grandstand.

Beginning Friday (May 6), post time for the Spring/Summer meet has been moved to 4:00 p.m. (EDT) for both the Friday and Saturday programs.  Cumberland’s extended pari-mutuel meeting races each weekend through July 23.