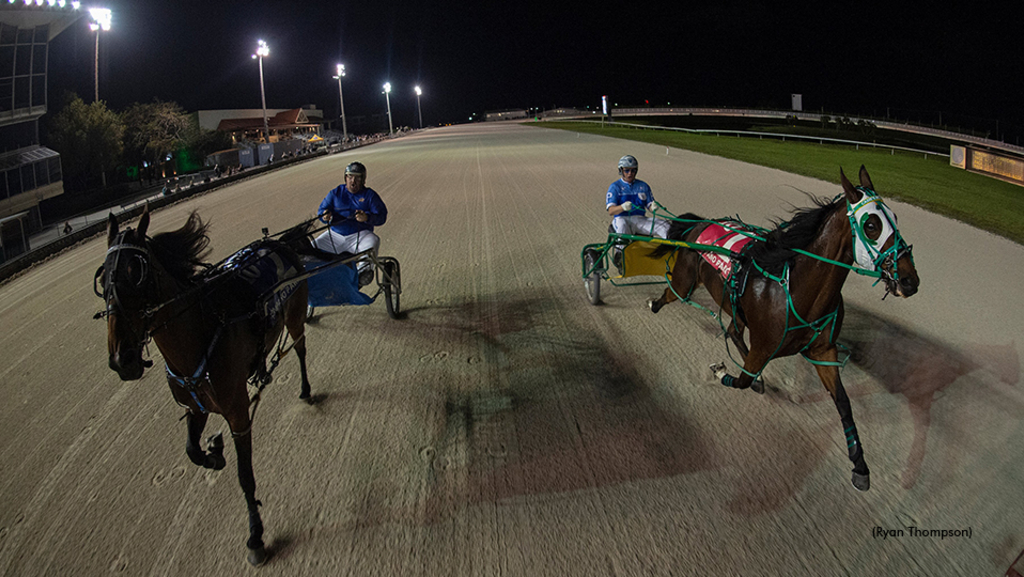 In an epic battle for the ages, Gulfstream Park's Pete Aiello, driving the John Hallett-trained Dont Chip Me, edged by Pompano Park's Gabe Prewitt, handling the Joe Chindano Jr. trainee Casies Believer, to earn bragging rights in the "Battle of the Big Mouths."

Aiello stalked Prewitt through the journey, tilting his mare to the outside heading into the final bend and wearing Prewitt's charge inside the 16th pole to record the half-length win. 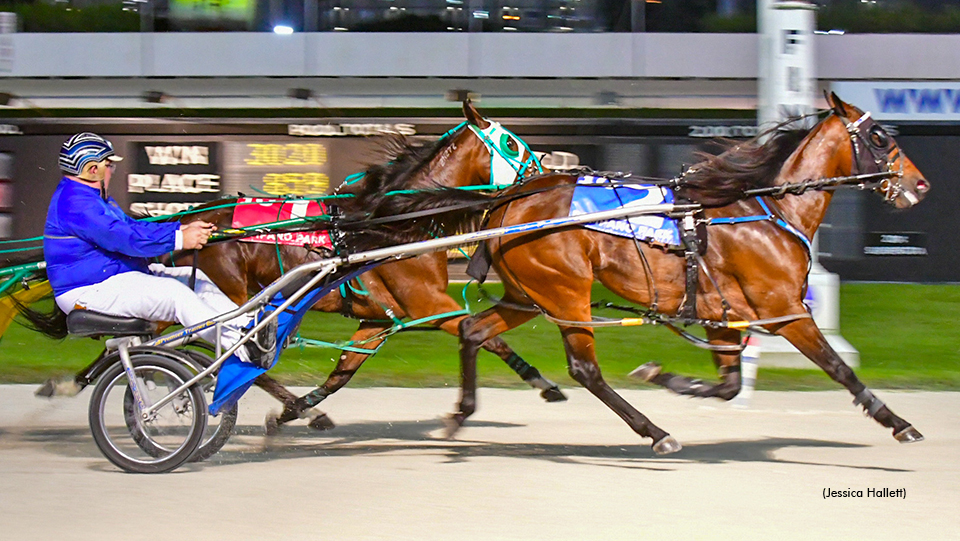 With a healthy crowd trackside cheering both sides, the event featured interviews with the trainers, pre-race interviews with Aiello and Prewitt and a special guest starting judge -- Wally Hennessey -- to spice up the occasion.

Though the contest between Aiello and Prewitt was decided by that half-length, it was a "dead-heat" for the two charities involved, the Thoroughbred Aftercare Alliance and New Vocations, both organization dedicated to our equine athletes after they retire from the racing wars.

"Our racehorses give their heart and soul on the track and it's imperative that their aftercare be insured as they also make great riding horses and show horses," said Aiello after the event. "It's a true honour for me to participate in this event and, win, lose or draw, as long as these aftercare organizations benefit, that's all that matters."

Prewitt echoed Aiello's thoughts, saying, "They may be different breeds, but all are horses that deserve a life of pleasure after their racing days are over.  It was great that Pete came up north here to participate and I am grateful to him and all of those that donated to our cause -- from Caesar's Entertainment and Gulfstream Park to those who donated on our 'gofundme' sites."

The final total benefiting horse aftercare could exceed $50,000 when the final count is completed.

Flagman, handled by trainer Rick Plano, led from first long stride to the wire in scoring a lifetime best equalling 1:52.4 triumph at Pompano Park on Monday night in the $14,200 Open Handicap Trot.

The five-year-old gelded son of Guccio ripped off fractions of :26.4, :56.1 and 1:24.1 in holding new arch-rival Max (Wally Hennessey) safe by a long neck. Keystone Apache (John MacDonald) was third, collaring The Lionking AS late for show honours while Crossfit Mouse picked up the nickel in the classy quintet.

Using seemingly effortless speed off the wings, Flagman, handicapped by the outside post, zipped the aforementioned quick opening panel to out-gun The Lionking AS as Crossfit Mouse drafted along from the rail in third, followed by Keystone Apache with Max spotting the leader over seven lengths early on.

Positions remained stagnant for the first half-mile with Max the only one on the move once they entered backstretch territory as, once again, the pace accelerated.

Around the final bend, Max had reached second but, still, close to three lengths away. Once they straightened away in the lane, Max began to gnaw away with a :28 closer but his rally fell a bit short as they hit the wire.

Plano also took the $12,600 Open II Trot with Born To Thrive as this nine-year-old altered son of Swan For All made two moves during his 1:54.1 triumph over the fastest closing Dont Sass Me (Hennessey) with Enzio (John MacDonald) third. Keegan Ho was next as the minor award went to the early leader, Susies Sister.

Indeed, it was Susies Sister wrestling the lead from Enzio after a sharp :26.4 opening panel with Gemologist away in good order third and Born To Thrive, beginning from the outside post seven, finding a spot closer up in fourth.

With little rest, Born To Thrive was out and going under the line the first time and began his second move -- this one grinding forward past the :55.3 half and sticking a nose in front at the third station in 1:24.1. In the lane, Born To Thrive continued on and only had to contain the late surge of Dont Sass Me at the wire.

Born To Thrive was the slight favourite at 8-5 and returned $5.40 to his faithful.

Racing continues on Tuesday night with a blockbuster 13-race program featuring a pair of Pick-4 events, each with a $15,000 guaranteed pool bolstered by a bettor friendly 12 per cent takeout, lowest in the industry, a second Pick-5 event and a Super Hi-5 jackpot with a carryover of $134,458. Post time is set for 7:20 p.m.