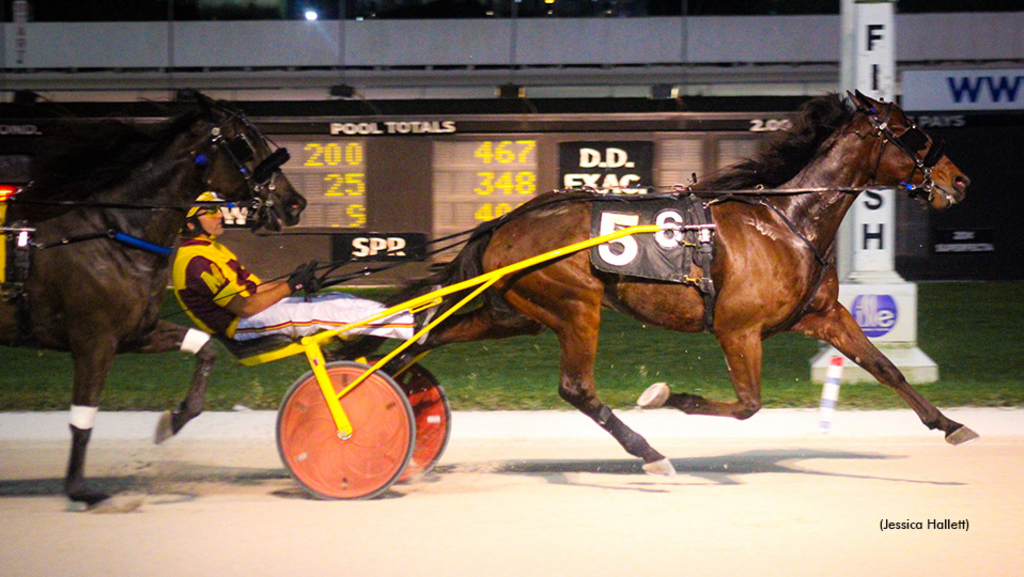 Flagman, catch-driven by Ricky Macomber Jr., rudely interrupted the five-race win streak of stablemate Toys For You with a lifetime-best 1:52.4 performance at Pompano park on Monday night (March 7) in the $14,200 Open Handicap Trot.

The five-year-old gelded son of Guccio zoomed off the wings and led at every pole, clocking panels of :27.1, :56.3 and 1:24.2 before his :28.2 finale left him a length clear of Toys For You (Rick Plano) on the line. Four Wheelin (Wally Hennessey) was third, almost six lengths away, while Star Track Hanover finished fourth over the 14-year-old warrior Cantab Lindy in the classy field of six.

Beginning from post five, Macomber sent Flagman right to the front as Cantab Lindy, beginning from the rail, protected his position to claim the garden spot with Star Track Hanover next in the top three.

Meanwhile, Toys For You, assigned the outside post, was unhurried off the wings and found himself last, charted 8-1/2 lengths away at the first call.

Three-eighths into the mile, Toys For You began his jaunt forward while improving one notch halfway through the mile, about five lengths back.

On the backside, Toys For You kept gnawing away and reached second around the final bend but could gain little further ground as Flagman had something left in the drive to the wire.

Discussing the event after the race, Plano said, "He (Flagman) got a big jump on me early -- maybe eight or 10 lengths -- and I could only get seven of them back the rest of the way. They both raced giant and it's no disgrace to be beaten by a horse that has Flagman's talent. I own 'Toys' and Maryann (Rick's wife) owns Flagman, so it's all in the family."

Flagman won for the second time this season to push his seasonal earnings to $28,194 and lifetime bankroll to $155,599.

The $12,600 Open II Trot went to The Lionking AS for owner/trainer Kevin Wallis.

The altered seven-year-old son of Lionhunter made a sharp quarter (:27.1) move the front went on to post fractions of :56.3 and 1:25.4 before a :28.2 closing kick home left him a half-length better than the fastest closing Sooo Handsome (Plano).

BJ Lorado (Tyler Jones), the early leader, was third, another nose back, while Enzio finished fourth. Absolut Uncertenty picked up the nickel in the septet.

For The Lionking AS, the win was his second of the new year and 24th lifetime, vaulting his career earnings to $341,542.

An unusual occurrence happened in the fourth race pentafecta when nary a single winning ticket was had on the 3-8-6-5-2 combo resulting in a $4,293 carryover travelling over to the fourth race pentafecta on Tuesday. The Super Hi-5 finale has a carryover that has ballooned to $41,727, as well. Post time is set for 7:20 p.m., with the Pick-4 pool guaranteed at $15,000 bolstered by an industry low 12 per cent takeout.