Jerv’s career in harness racing spanned well over 40 years. Well-liked and respected by all industry participants, his career started in his hometown of Regina working for a number of trainers — Richard Callaghan, Dr. George Paveley and Eddie Tracey to name a few. He then ventured onto his own and started his own public stable.

Driving was his favourite aspect of harness racing and he did so all over the prairies, winning numerous races and driving titles. He retired with 2,782 wins as a driver. Known as being very loyal, he would turn down better mounts because he felt he owed a specific trainer his support. One of the highlights of his career was winning the Nat Christie Memorial in 1989 with the Doug Stout-trained Nealies Ten Spot. 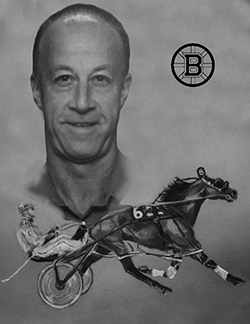 As per Jerv’s wishes, no funeral will be held.

Please join Standardbred Canada in offering condolences to the family and friends of Jervis Clifton.

Was a great friend for a…

Was a great friend for a long time. Remember the good times that laugh of his. The road trips and hanging out at the barn having a few beers and him telling the stories of starting in the game with characters like Dr. Paveley. Those were special times; really going to miss the guy.

So sorry to hear of Jerv's…

So sorry to hear of Jerv's passing. He was a great guy, driver and horseman. We started our careers not too far apart in Regina and were fierce competitors on the track but that was always over after the races. WILL always miss Jerv
RIP buddy

So sorry to hear about Jerv…

So sorry to hear about Jerv.
He was a great guy and I will miss our chats.
Judy & Tona Pitt

we moved to Alberta in 1979 and were there for 5 years, during that time we made many good friends, none more than Jerv, he was a true gentleman, a great horseman, and a great sport, he drove some of our horses, we had some luck, and a lot of fun, he introduced me to hockey pools which I am still involved with, to his family and friends we offer our condolences.
Roger and Peg Des Roches.

Joltin' Jerv ... a true sports fan ... the number one fan of the Boston Bruins guaranteed ,,, could keep a parked-out pacer alive better than any other driver I ever saw ... RIP, ol' pal.

we spent 5 years in Alberta,…

we spent 5 years in Alberta, made a lot of friends none better than Jerv, he was a super guy!!
to his family and friends, we send our condolences. Roger and Peg.

Really sad news! Jerv and I…

Really sad news! Jerv and I combined for our share of wins over the years - probably the highlight being the 1995 Western Canada Pacing Derby with Beach of Faith. He was a great horseman, driver, and most importantly, a great human being! Rest in peace my friend...